As software systems get bigger, they get more complex. Complex software is harder to improve. John Ousterhout, a professor at Stanford University, has recently published a really neat book that provides many tips for making life simpler: A Philosophy if Software Design.

The overall suggestion is that if your team is struggling with a spaghetti code base, its members should be investing about 10-20% of their total development time cleaning it up.

The book's title is misleading. It mentions "philosophy", but the book i very practical in nature. It's small and short. Its messages are clear.

Why bother cleaning up the code?

If your team works smart, it's more likely to finish the project. Squishing each bug as fast as possible feels faster, but you're likely to be adding technical debt over time. 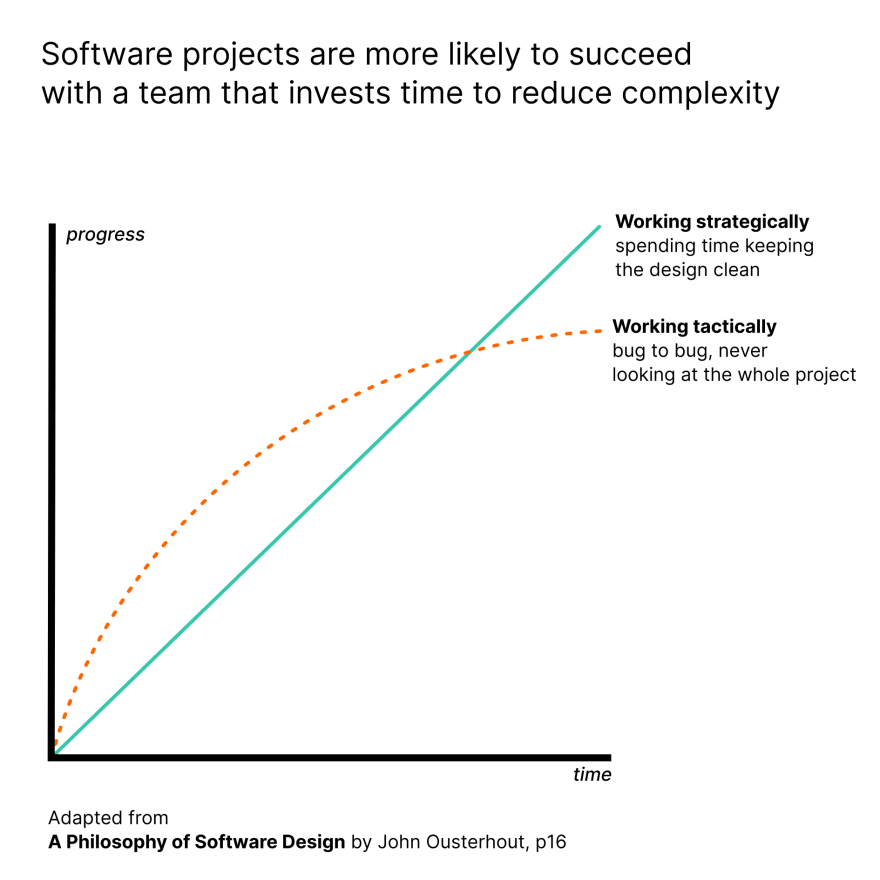 What can be done?

The book provides lots of advice, often drawing from experience reviewing code. Here are just a few tips that I've taken from the book.

Will it help me?

I'm a team member on a code base with over 1 million lines of code. We've got levels upon levels of complexity built up over nearly a decade of development. Many attempts at reducing complexity have actually back-fired. They were never quite complete. That means that there are now two things to fix up, instead of one.

The book has given me a fresh perspective (& some hope!). It's also given me a new toolkit. I really appreciate the insight provided on almost every page.

Is it worth buying?

If your team is struggling under the weight of technical debt, then definitely. If you're new to programming, probably. It's an accessible language-agnostic guide to becoming a better programmer. It's been a huge benefit to me.

Tim McNamara
dev/data/words
What was your win this week?
#discuss #weeklyretro
Awesome AI tools to assist you in coding
#webdev #javascript #beginners #productivity
How do you motivate yourself to write when so few are reading it?
#discuss #watercooler #meta

Once suspended, timclicks will not be able to comment or publish posts until their suspension is removed.

Once unsuspended, timclicks will be able to comment and publish posts again.

Once unpublished, all posts by timclicks will become hidden and only accessible to themselves.

If timclicks is not suspended, they can still re-publish their posts from their dashboard.

Once unpublished, this post will become invisible to the public and only accessible to Tim McNamara.

Thanks for keeping DEV Community 👩‍💻👨‍💻 safe. Here is what you can do to flag timclicks:

Unflagging timclicks will restore default visibility to their posts.