Last week it finally happened, I saw my first memory leak in production - that I know of - and over time it was eating up all the memory.
Throughout my career, I've been warned, and I've warned about these leaks and why it's so important to release unmanaged resources with the Dispose method. Yet, we still created a memory leak.

Knowing that you have a memory leak

We noticed that the process of a new API was consuming more memory compared to other processes.
At first, we didn't think much of it and we assumed it was normal because this API receives a lot of requests.
At the end of the day, the API almost tripled its memory consumption and at this time we started thinking that we had a memory leak.

Remember that high memory usage doesn't always mean that there's a memory leak. Some processes just use a lot of memory.
The problem is that the memory increases linearly over time, and without it dropping back to its normal consumption.

The second day, this happened again and it was worse, the API with the memory leak was almost consuming 4GB. Which is up to 5 times more resources compared to other APIs.

I think that you must be able to reproduce a problem first to solve it. This gives you some insights into the problem, and you exactly know where and when that problem occurs.

Since this was a first-timer for me, I followed the Microsoft Docs (which were well written and was exactly what I was looking for) Debug a memory leak in .NET Core
.
In this tutorial you use the dotnet commands, dotnet trace, dotnet counters, and dotnet dump to find and troubleshoot process.

While being impressed with these tools, I wasn't able to reproduce the memory leak locally despite my effort to mimick the traffic to the API with JMeter.

By creating a dump file of the process, we have a way to look into the process. All of the information that we need is already there, it just needs to be collected and analyzed.

To create a dump file, use the dotnet dump collect command, or if you can log in on the server by opening the task manager, right-clicking on a process, and selecting "Create a dump file".

This gives you a *.dmp file which you can analyze with the dotnet dump analyze command.
Personally, I like it more visualized and thus I imported the file into dotMemory to analyze it.
There's also PerfView, which is free to use.

When the dump file was imported, the first graph and data table made it very obvious that we had a memory leak.
A file logger was using 90% of the memory, equivalent to 3.5GB. 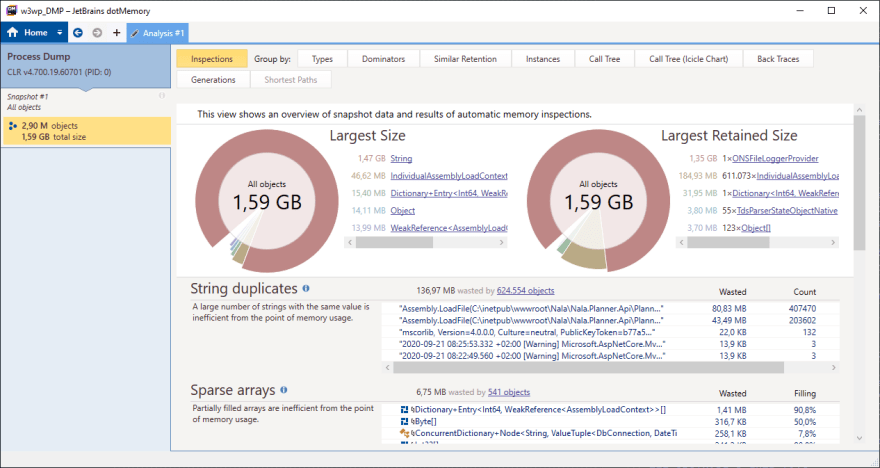 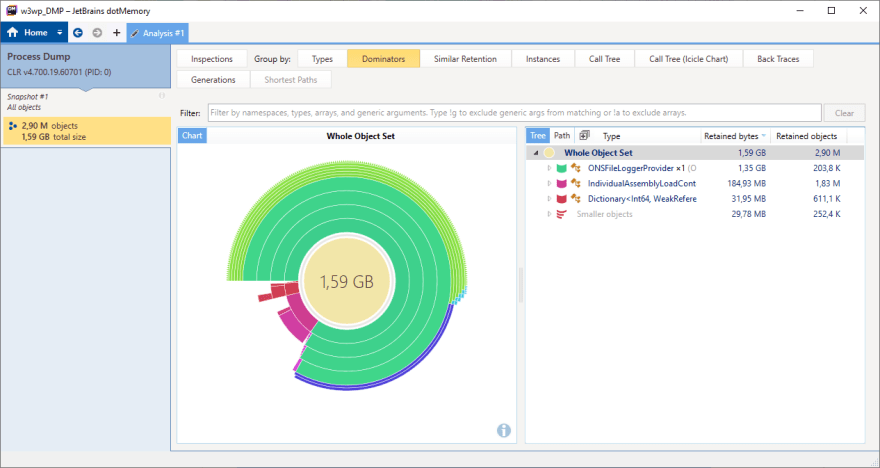 When our memory leak problem was solved, I saw that [Scott Hanselman] wrote two articles about the diagnosing and visualizing traces a couple of days ago. I can recommend reading his articles to see more examples, Cross-platform diagnostic tools for .NET Core and dotnet-trace for .NET Core tracing in PerfView, SpeedScope, Chromium Event Trace Profiling, Flame graphs and more!.

Creating a Nuget Package From a .Net 6 class library

Thanks for keeping DEV Community 👩‍💻👨‍💻 safe. Here is what you can do to flag timdeschryver: