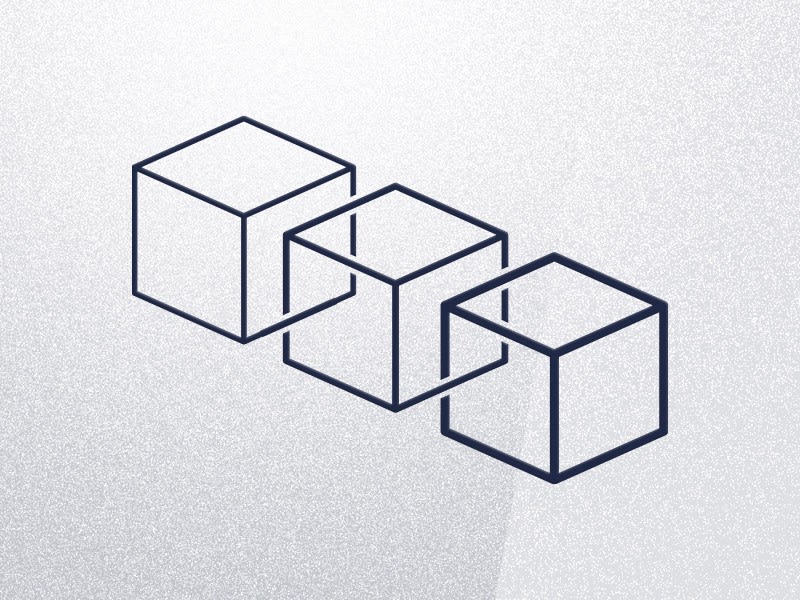 You may or may not heard about Blockchain, but is the technology behind the biggest financial revolution.

Is the foundation of Bitcoin, the first decentralized cryptocurrency, created in 2009 by a Satoshi Nakamoto. Well, to be fair, not exactly. 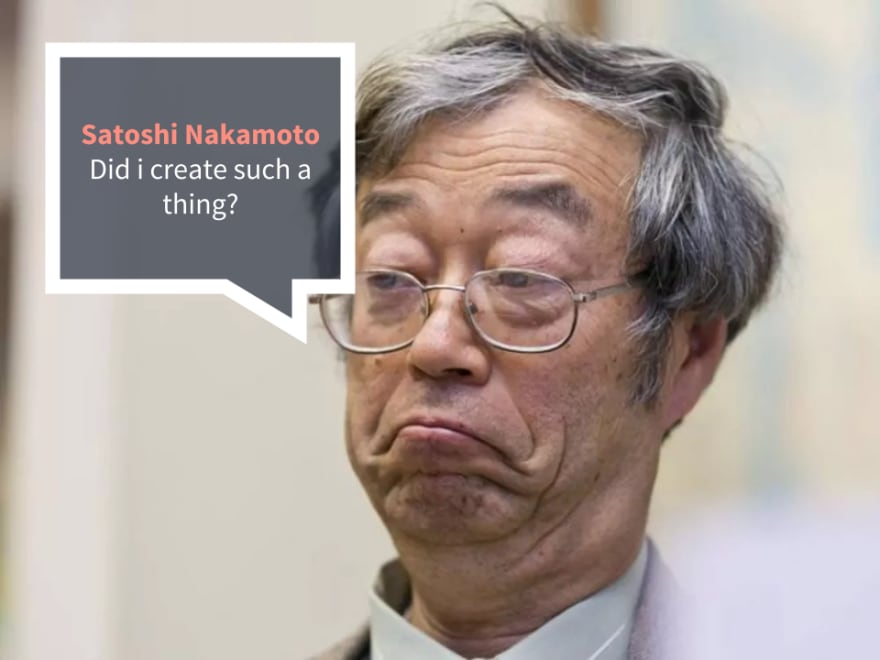 Satoshi Nakamoto is the name used by the person or people who designed bitcoin and created its original reference implementation.

The identity of Satoshi Nakamoto, is one of the most compelling stories in technology. In 2008, Nakamoto launched bitcoin with a white paper; in 2011, he vanished, just as the project was hitting its stride, his frequent forum posts and emails tapering off to silence. (In his last known correspondence, he told a bitcoin developer that he had “moved on to other things.”).

We Need to Know Who Satoshi Nakamoto Is - The New Yorker

The Nakamoto mystery deserves an entire article for himself, but let’s focus now with Bitcoin.

Bitcoin is a global payment network like Visa or MasterCard, but since anything digital can be copied over and over again, the hard part is making sure that nobody spends the same money more than once, this is a known issue called the double-spending problem. Traditionally, this is done by having a trusted central authority (like PayPal) that verifies all of the transactions.

But bitcoin has an essential difference: There’s no company with ownership or control over the network. Instead, computers all over the world cooperate in a massive peer-to-peer network to maintain a shared record of transactions called a blockchain. This results in a system where payments are non-reversible, accounts cannot be frozen, and transaction fees are much lower.

The blockchain is a shared public ledger on which the entire Bitcoin network relies. All confirmed transactions are included in the blockchain. This way, Bitcoin wallets can calculate their spendable balance and new transactions can be verified to be spending bitcoins that are actually owned by the spender. The integrity and the chronological order of the blockchain are enforced with cryptography.

A transaction is a transfer of value between Bitcoin wallets that gets included in the blockchain (remember, the shared public ledger). Bitcoin wallets keep a secret piece of data called a private key or seed, which is used to sign transactions, providing a mathematical proof that they have come from the owner of the wallet. The signature also prevents the transaction from being altered by anybody once it has been issued. All transactions are broadcast between users and usually begin to be confirmed by the network in the following 10 minutes, through a process called mining.

Mining is a distributed consensus system that is used to confirm waiting transactions by including them in the blockchain. It enforces a chronological order in the blockchain, protects the neutrality of the network, and allows different computers to agree on the state of the system. To be confirmed, transactions must be packed in a block that fits very strict cryptographic rules that will be verified by the network. These rules prevent previous blocks from being modified because doing so would invalidate all following blocks. Mining also creates the equivalent of a competitive lottery that prevents any individual from easily adding new blocks consecutively in the block chain. This way, no individuals can control what is included in the blockchain or replace parts of the blockchain to roll back their own spends.

How does Bitcoin work? - Bitcoin

This is how the blockchain looks like in real time. 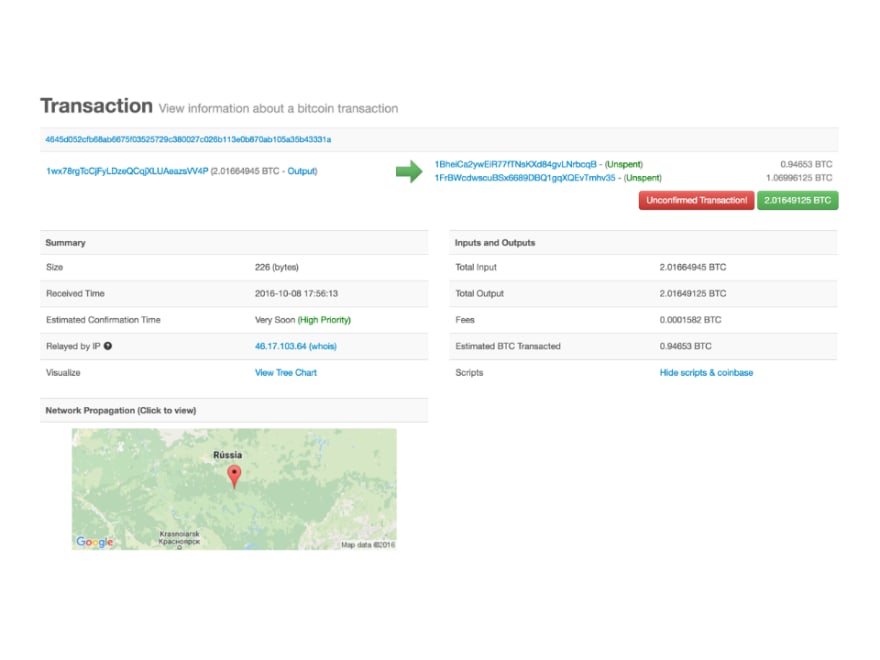 Detail of one of those transactions. 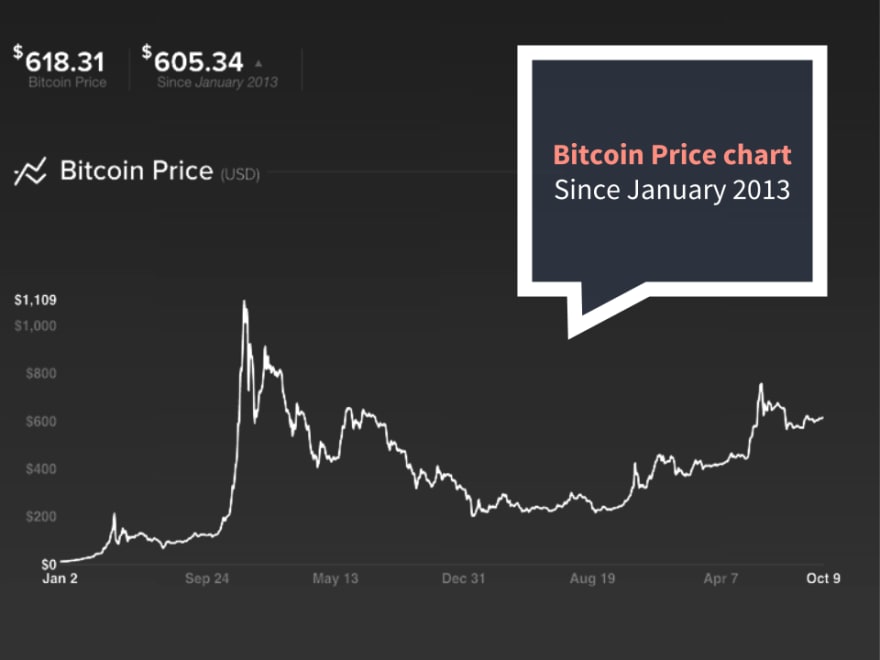 This is a chart of the evolution of the bitcoin price since its creation, as you can see there is a huge peak in November 23 of 2013, where the cost of one bitcoin rose to the all-time peak of $1,242. 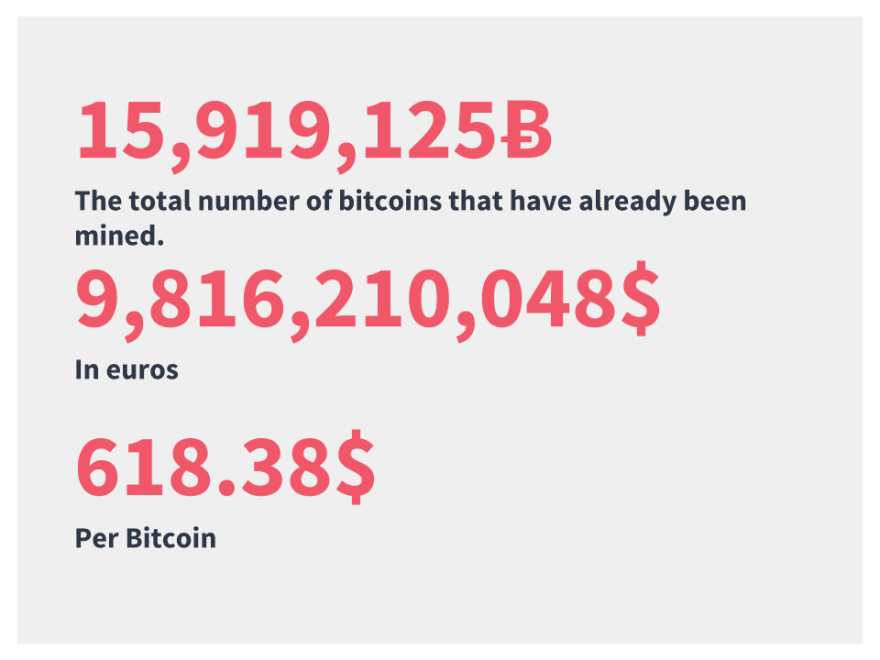 Almost 16 millions is the total number of bitcoins that have already been mined; in other words, the current supply of bitcoins on the network.

But i want to talk about blockchain, not only bitcoin. Why?

Because there’s a bunch of other cryptocurrencies that proliferated using this same blockchain approach after the rise in popularity of the bitcoin. Such as: 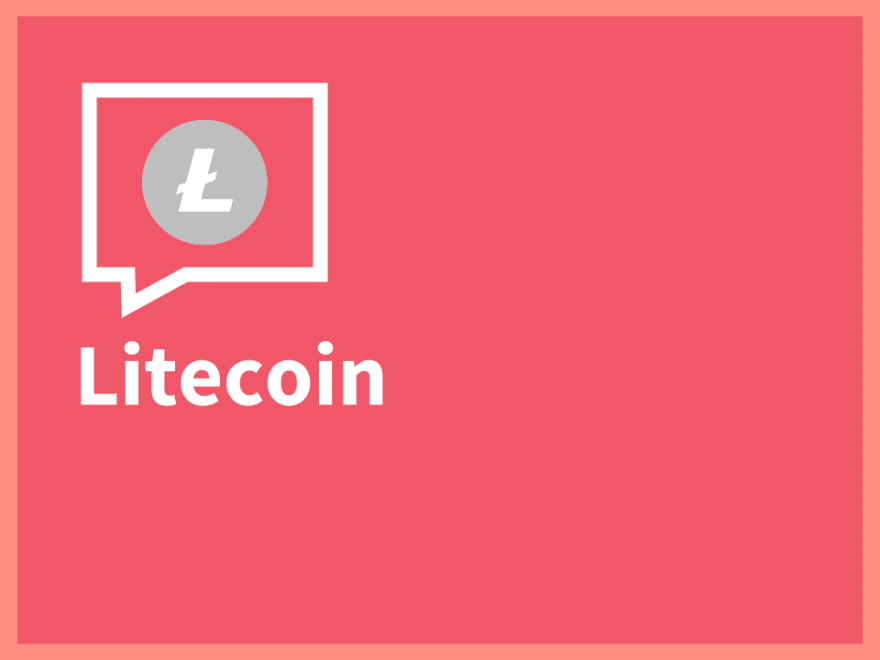 Litecoin, inspired by and technically nearly identical to bitcoin. 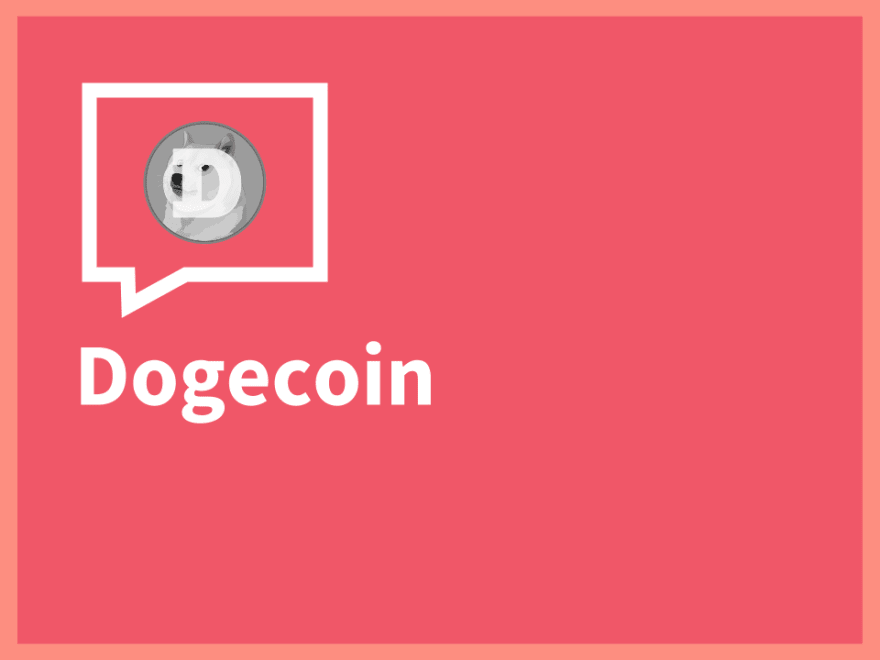 Dogecoin, featuring a likeness of the Shiba Inu dog from the “Doge” Internet meme as its logo. Introduced as a “joke currency”, Dogecoin quickly developed its own online community and reached a capitalization of USD 60 million in January 2014.

I want to share with you his promotional video, i think it’s very educational.

But what i want to talk about here is the Blockchain.

All modern cryptocurrencies rely on this technology to keep everything going, only with some minor modifications in the process. But there’s another cryptocurrency that took one step further, it’s called Ethereum. 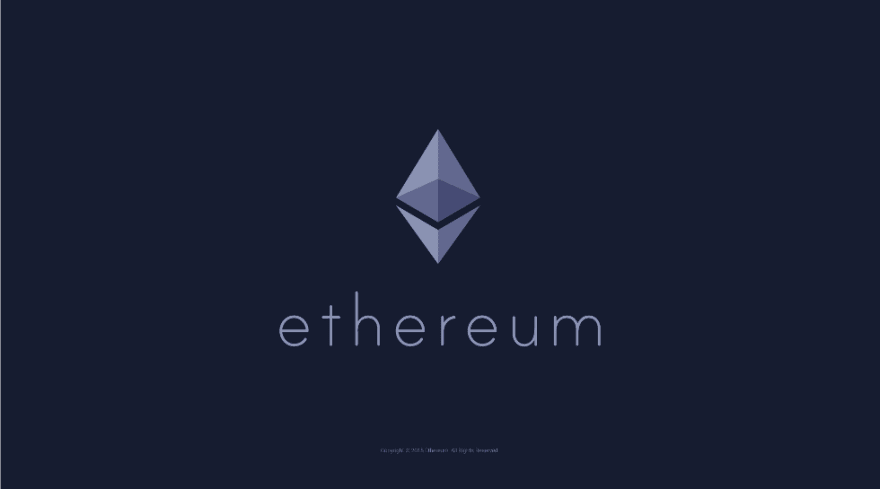 The Bitcoin network is custom-designed to verify and record payments. In 2014, a 20-year-old programmer named Vitalik Buterin realized that he could create a Bitcoin-like network that could perform a much broader range of computational tasks. If Bitcoin is a distributed version of Visa or MasterCard, Ethereum is a bit like a distributed version of cloud computing platforms run by companies like Amazon and Microsoft. 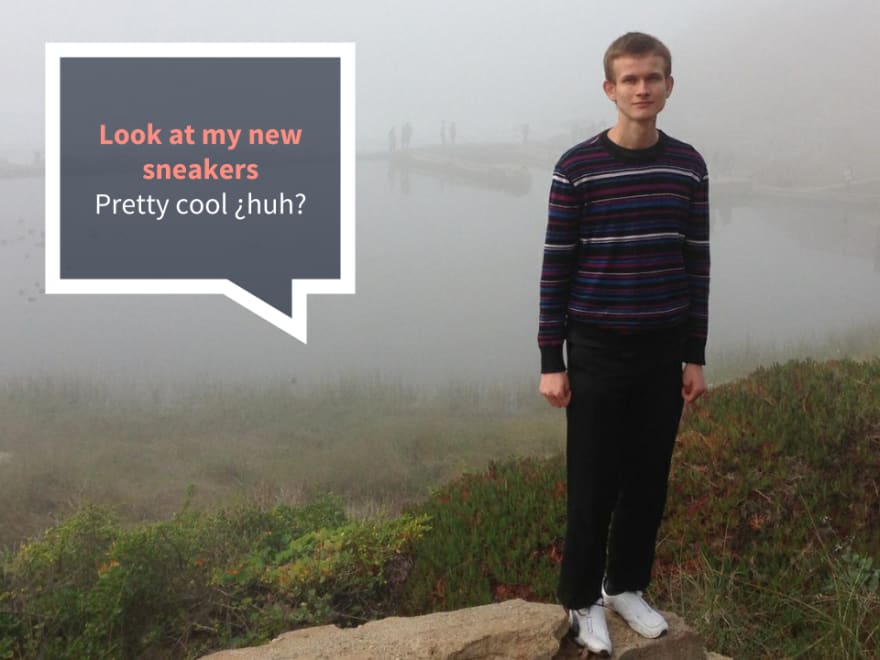 Not only can you use Ethereum to make ether-denominated electronic payments, you can also spend ether to run programs on the Ethereum network itself.

Ethereum is a very unusual cloud computing network. Every calculation is performed simultaneously by thousands of computers around the world, making it thousands of times less efficient than a conventional online server. And because the results of these calculations are stored on the Ethereum blockchain, all data is public. So Ethereum would be a terrible choice for conventional applications like running a web server.

But Ethereum’s distributed structure also gives it a unique advantage: Once a program starts running, no one has the power to modify or stop it. That means you can use Ethereum to make binding, long-term commitments — which is why Ethereum programs are known as “smart contracts.” 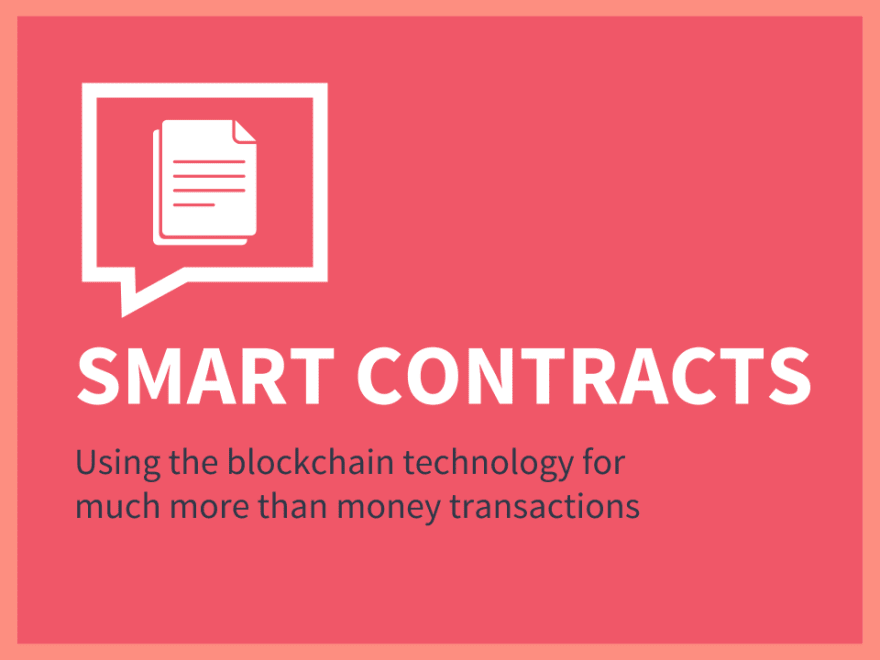 A good way to illustrate Ethereum’s capabilities is with an example. One of the biggest challenges of Bitcoin has been the currency’s volatility; Ethereum offers a potential solution for this problem: a smart contract that hedges against currency fluctuations.

This works the same as a conventional hedging contract, with one important difference: The contract is enforced by a computer program running on the Ethereum network instead of by the courts. Once submitted, the program can’t be modified by either party, so neither party has to trust the other.

There are a lot of different ways to use Ethereum contracts, but the application that has attracted the most interest is virtual organizations. At a fundamental level, an organization is just a bundle of agreements between groups of people — shareholders, employees, creditors, and so forth. In most organizations, these are conventional contracts enforced by the court system. Ethereum allows the creation of decentralized autonomous organizations, whose contracts and bylaws are enforced by Ethereum smart contracts instead.

This is not just a theoretical possibility. A virtual organization called the DAO has raised more than $150 million over the past few months. Technically speaking, the DAO is just a specific Ethereum address controlled by a computer program running on the Ethereum blockchain. People send ether to this address and get back shares in the organization.

Ethereum, explained: why Bitcoin's stranger cousin is now worth $1 billion

This are only a few examples of what can be achieved by the smart contracts. There’s already tons of apps over the Internet using this technology! This, I think, will be one of the biggest things to come that will change our society forever. 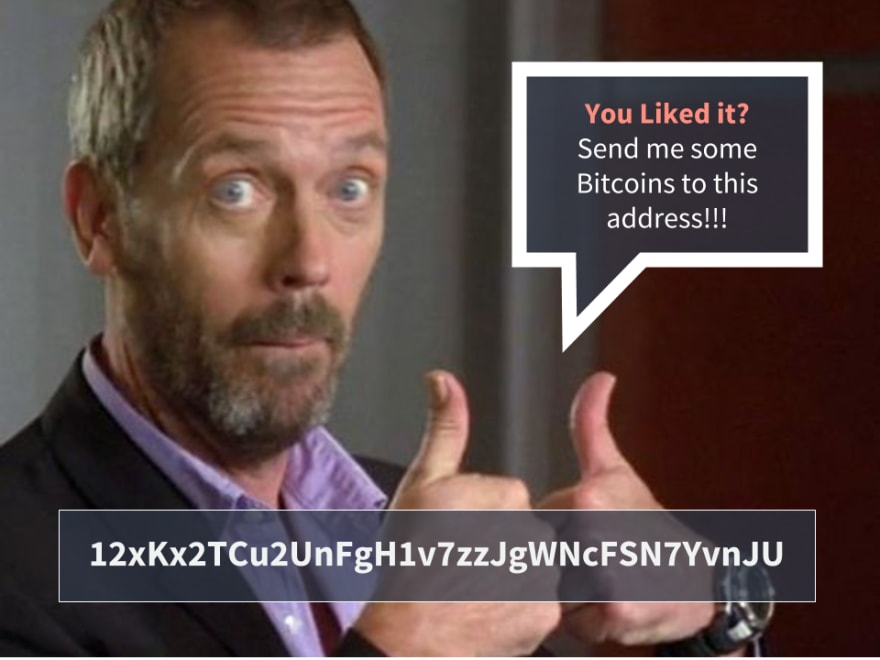 Send me some Bitcoins to this address!

This article is based on a presentation i made, thats why it’s full of images (from the slides), and there’s a lot of text borrowed from articles. I tried to link all the sources i used.

Once suspended, tonioriol will not be able to comment or publish posts until their suspension is removed.

Once unsuspended, tonioriol will be able to comment and publish posts again.

Once unpublished, all posts by tonioriol will become hidden and only accessible to themselves.

If tonioriol is not suspended, they can still re-publish their posts from their dashboard.

Once unpublished, this post will become invisible to the public and only accessible to Toni Oriol.

Thanks for keeping DEV Community 👩‍💻👨‍💻 safe. Here is what you can do to flag tonioriol:

Unflagging tonioriol will restore default visibility to their posts.