This post compares practical and impractical pointers around these two services, so you can choose the right service for your use case.

The Practical Comparison: ElastiCache Vs. Self-hosted Redis on EC2

Redis is one of the leading open source, in-memory, key value store. It is a good caching tool. If you are an AWS user, you can leverage this tool via an EC2 instance (by self-hosting) or ElastiCache.

The benefits of using ElastiCache is that AWS manages the servers hosting the Redis. Whereas, the benefits of using self-hosted Redis on EC2 is it provides the freedom to maneuver between configurations. There are several other such differences. Knowing these differences will equip you enough to make the right choice.

To start with, let’s walk you through the top differences between ElastiCache and self-hosted Redis on EC2. 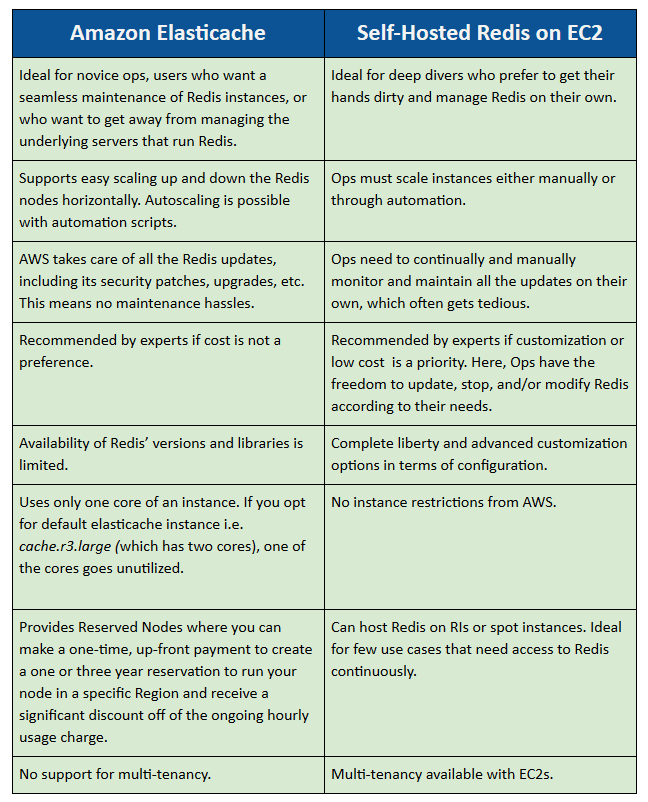 ElastiCache: Scales Automatically According to Requirements

One of the most adored features of ElastiCache is its scalability feature. It can scale-out, scale-in, and scale-up as per application demands. In addition, write and memory scaling is supported with sharding, while replicas provide read scaling.

ElastiCache: Instances with More Than One vCPU Cannot Utilize All the Cores

Redis uses a single thread of execution for reads/writes. Only one thread/process will take care of reads/writes in the database. This ensures that there are no deadlocks occurring due to multiple threads of writing/reading multiple information into a disk. This is an extremely powerful feature of Redis in terms of performance, as it removes the need to manage locks and latches. However, this one thread can use only one core, and vCPU does all the job. So, you do not have the freedom to use multiple CPUs. Consequently, ElastiCache instances with more than 1 CPU face wastage of extra vCPUs.

Self Hosted Redis on EC2: Allows You to Update Latest Version ASAP

One of the major advantages of using self hosted Redis cluster is that the you can always stay updated with the most recent version. You can utilize the best features of the software even before the rest of the world can actually start using it.

Self Hosted Redis on EC2: Provides the Freedom to Modify Configurations

Self hosted Redis on EC2 provides the freedom to understand its underlying functionalities and modify the configurations as per your requirement. For example, to modify Redis configuration to continually take snapshots, you can:

Create Snapshot if there are minimum 10 changes within 300 seconds

Create Snapshot if there are minimum 10000 changes within 900 seconds

Other configurations like "stop-writes-on-bgsave-error" and "maxmemory" are very useful config changes. If you are looking for more tweaking details, check this list below:

Even though Redis on EC2 provides the freedom to maneuver in terms of configuration, it is difficult to maintain. Monitoring the metrics is not easy. You either need to use a third party tool, like AppDynamics, or call APIs manually to monitor the metrics from Redis. You can automate scaling/updating/upgrading/security patches etc. using tools like Ansible, Chef, or Puppet. This is cost-effective but effort intensive.

Amazon recommends users to only use HVM based EC2 instances. Only a handful of PV based instances are available due to latency issues.

If you ever wondered which service to opt, you know where to reach out!

Once suspended, totalcloudio will not be able to comment or publish posts until their suspension is removed.

Once unsuspended, totalcloudio will be able to comment and publish posts again.

Once unpublished, all posts by totalcloudio will become hidden and only accessible to themselves.

If totalcloudio is not suspended, they can still re-publish their posts from their dashboard.

Once unpublished, this post will become invisible to the public and only accessible to Totalcloud.io.

Thanks for keeping DEV Community 👩‍💻👨‍💻 safe. Here is what you can do to flag totalcloudio:

Unflagging totalcloudio will restore default visibility to their posts.