TL;DR Abstract - I built ZombieWriter, a Ruby gem that will enable users to generate news articles by aggregating paragraphs from other sources. It can use either machine learning algorithms (Latent Semantic Analysis and k-means clustering) or randomization to generate human-readable articles. In this article, I demonstrate how ZombieWrtier can use machine learning to create a Markdown file containing 17 human-readable articles.

After finishing the demonstration and comparing the output to a randomization process, I then explain possible "future research" plans to improve the text generation process. I am not yet ready to claim that this technology is disruptive. But it's very close to being "production-ready".

Machine learning is hot (to put it mildly). The paradigm of using data instead of code to program machines has been applied to solve a variety of real-world problems. It also been applied to the creative arts, with neural networks being used to generate paintings and music.

Text generation using machine learning is far less advanced though. Many famous attempts have been focused on training neural networks to generate text, and the output tends to be evocative in short bursts. However, these texts do not "scale" properly. Any coherence that a neural network generates by accident gets drowned out by the incoherence that it usually generates.

I have previously blogged about text generation. But I've been interested in "human-readable" text generation - text-generation that reaches the same quality standards of human literature. Machine learning algorithms were impressive, but they could not scale up well. So I usually ignored them in my blogging, in favor of "structural modeling" (which I defined as "writing code that 'encodes' the plot/style/characterization at a large scale").

Yet, technology marches onward. As machine learning becomes more popular and accessible, people are able to try different approaches and techniques to the problem of text generation. Some of these techniques actually were successful, when applied in conjunction with structural modeling. For example, Mike Lynch used neural networks to generate words for fantasy settings.

A few months ago, I admitted that machine learning may play a role in the future of text generation, and made a prediction - "Statistical Approaches Will Be Part Of A 'Toolkit' In Text Generation". At the same time, I was putting the finishing touches on a secret project to use machine learning in my own text generation. (If you're curious in the nitty-gritty research details, here's some excerpts of a Slack conversation in September 2016 about my experiments.)

While you can download the gem and try it out yourself, knowing how it works may be more interesting. Here's the step-by-step guide for how ZombieWriter's Machine Learning algorithm works.

Latent Semantic Analysis is a machine learning algorithm that is used for determining how similar paragraphs are to each other. It was invented in the late 1980s, and had generally been used for "information retrieval".

LSA works by creating "bags-of-words" containing all the important words in a paragraph, and then comparing the different "bags-of-words" to determine their 'similarity'. Rather than deal with the math (because I don't quite understand it myself), here's a visual example, with four documents.

One interesting feature about LSA is that it is able to determine relationships between different words based on their presence in documents...which also helps it identify similarities.

For more information on the mathematics behind LSA, please review the blog post Latent Semantic Analysis in Ruby. I used Classifier-Reborn, a Ruby gem, for conducting LSA of my paragraphs.

Once you determine what paragraphs are similar to each other, you need to group similar paragraphs together, using an approach called "clustering". Clustering tends to be used for exploratory data analysis; you have a lot of data that you want to easily understand, so you have an algorithm separate the data into different groups. 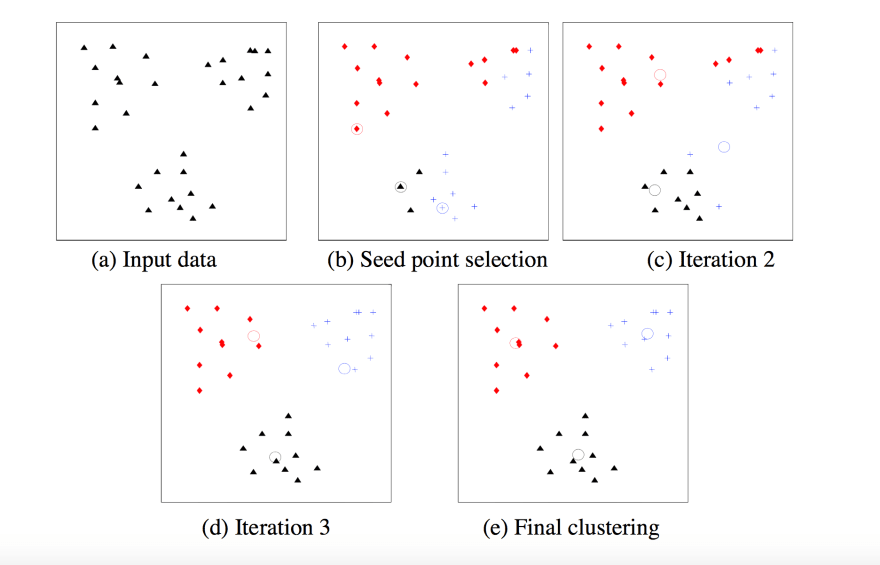 Finally, we need to generate a headline for each cluster of paragraphs, to make the clusters look less like a collection of similar paragraphs and more like news articles. There was three approaches I could take:

The last approach produced the most readable headline with the least amount of human intervention, so I chose that approach. However, I then realized that Classifier-Reborn also had its own built-in Summarizer. To avoid taking on unneeded dependencies, I decided to use Classifer-Reborn's summarizer instead of "epitome".

Classifier-Reborn uses LSA for its summarization. It first breaks up the "cluster" into sentences and then choose the sentence has the highest similarity when compare d to all the other sentences. So, let's look at my table again, this time treating each "document" as a sentence in a larger article.

Document B appear to have the most similarity, as it shares the same words as all the other documents in the set (A, C, and D). Therefore, it is likely that we would pick Document B and treat it as our headline.

National Novel Generation Month (or NaNoGenMo) is a very interesting competition, with a lot of commentary over it. Rather than write our own commentary, why not simply reuse and remix existing commentary?

For this demonstration, I first prepared a CSV file nanogenmo.csv. This CSV file contains 90 paragraphs about the NaNoGenMo (National Novel Generation Month) competition, found all over the Internet. To ensure that we don't engage in plagiarism, we will always provide proper attribution to each source.

Then, I write a small script to parse this CSV, include it into ZombieWriter and then generate some news articles in an external file. ZombieWriter will also include proper citations, linking back to the original sources.

Here is the Markdown file containing 17 different articles about NaNoGenMo. And here's an example generated article:

0 - Computers are coming for our jobs, as writers

Creative and artistic feats are often seen as the last refuge for human endeavor from the coming robot apocalypse. But if NaNoGenMo gains a foothold and improves, at least we'll all be well entertained in our unemployment.---"Computers Write Novels Faster Than You Do", Smithsonian Maganize

Computers are coming for our jobs, as writers. Spooky.---Tom Trimbath

But maybe this contest just reflects our evolution towards a more technological society. For the last 16 years November has seen “National Novel Writing Month” (or NaNoWriMo), a free event challenging amateur writers to compose a 50,000-word novel before December 1st. But two years ago it was suddenly joined by this companion event for artistically-inclined computer programmers, dubbed NaNoGenMo – drawing some suitably geeky jokes on Twitter. It's an irresistible challenge for a certain kind of creatively-inclined geek “This sounds like a great idea…” read one of the responses to the contest announcement. “How can anyone not take part?”---Computers Get Busy for National Novel-Generating Month

For programmers, there are many interesting things about NaNoGenMo even if no breakthroughs in AI are expected. (The point of an exercise like this isn't that it's done well, but that it's done at all. A month is not enough to build a robust system, but it is enough to experiment with and prototype new approaches for generating fifty thousand words of intelligible text. The value of a compressed time frame for experimentation is something that the participants of NaNoWriMo can well appreciate.)---Another Word:Let's Write a Story Together, MacBook

While the generate articles' quality tends to be pretty good, there are a few problems with this demonstration that do require notice.

I wanted to test whether machine learning would produce better articles than randomization, so I also used the same nanogenmo.csv file with ZombieWriter::Randomization. Here's a Markdown file with 17 articles, using random generation.

However, randomization is faster than machine learning, able to generate 17 articles in less than a second. Randomization also relies on less lines of code, meaning that it's much easier for a programmer to maintain.

That being said, the increased quality might outweigh the slower speed and the higher maintenance cost. So machine learning outweighs randomization, for now.

There are certainly issues that have to be fixed, such as fixing bugs, writing unit tests, and porting the library over to Python. And that type of maintenance work matters a lot. There's also the need to explore new ways to improve the output of ZombieWriter, so that the generated texts becomes "production-ready" -- able to used in a wide variety of different industries.

Obviously, it's much easier to write about what should be done rather than to actually do it. Still, here's some ideas I'm interested in:

Of the ideas I'm interested in, "Gather the Source Data More Efficiently" is the highest priority. The best way to improve a text generator is to expand its corpus, after all. After acquiring enough data though, it will be time to look at ways of utilizing that data more effectively.

Unlike my previous blog posts on computer-generated literature, this blog post is human-generated. This may be due to its nature as a technical "how-to" tutorial, where the order of paragraphs matters a lot. While text generation is slowly advancing, it still has a long way to go.

In the past, every time I wrote about text generation, I would provide links to all my previous articles on dev.to. But this section just grew larger and larger. Using the tagging system wouldn't really work since the first two articles were written before the introduction of the tagging system.

Instead of providing more and more links, I created an eBook that contained all my articles...as well as a link to the original sources. The eBook ("An Introductory Guide to Computer-Generated Works") is hosted on GitBook. It provides links to the various articles I have ever written on computer-generated texts, as well as the full text of those articles if you like to use GitBook's UI or want to read these articles offline. You may download/star/subscribe to the eBook using this link.

Tariq Ali
Tariq Ali is an aspiring web developer dedicated to producing interesting applications and websites for businesses. Before entering into web development, Tariq served as a journalist, real estate a...
Statistical Approaches Are Actually Pretty Good - A "Mea Culpa" Regarding One Of My Predictions About Text Generation A Review of "The Discovery Engine" - A Short Story About the Future of Content Generation How To Abuse the /docs "Feature" To Quickly Deploy a Middleman Static Site Onto GitHub Pages

Once suspended, tra will not be able to comment or publish posts until their suspension is removed.

Once unsuspended, tra will be able to comment and publish posts again.

Once unpublished, all posts by tra will become hidden and only accessible to themselves.

If tra is not suspended, they can still re-publish their posts from their dashboard.

Once unpublished, this post will become invisible to the public and only accessible to Tariq Ali.

Thanks for keeping DEV Community 👩‍💻👨‍💻 safe. Here is what you can do to flag tra:

Unflagging tra will restore default visibility to their posts.