What is up! fellow coders.

Quick disclaimer: I'm a month into a coding bootcamp, but am confident this could help others like myself understand module pattern from a beginner perspective.

What is a Module

Modules are an integral part of any large application's architecture and typically help in keeping the units of code for a project both cleanly separated and organized.

In JavaScript there are several ways to implement a module like object literal notation, AMD modules, and CommonJS module to name a few. But in this article I will be focusing on The Module Pattern.

The Module pattern (MP) was originally defined as a way to provide both private and public environment for classes in software engineering.

In JavaScript the MP further enhances on that notion. We're able to include both public/private methods and variables inside a single object, thus shielding particular parts from the global scope. With this pattern, only a public API is returned, keeping everything else within the closure private. This privacy pattern can sometimes utilize an immediately-invoked function expression (IIFE) where an object is returned.

Your take away from that should be "the module pattern is one of the methods that uses a module to keep certain codes, variables,functions, etc. inside a single object, so it doesn't pollute the global scope. Thus keeping our code clean and organize "

Lets take a look at an example of a module pattern and break it down. 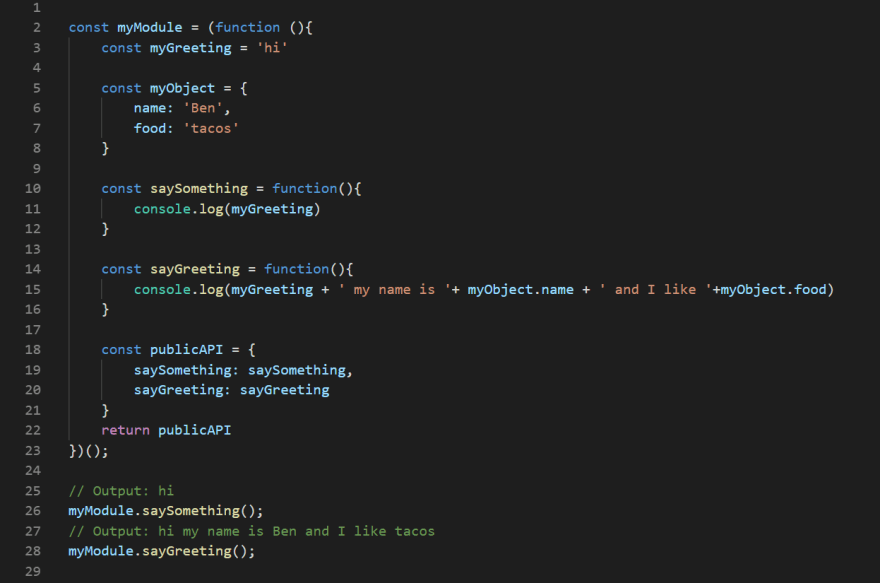 Therefore, what makes myModule a module pattern is how I was able to make everything inside private from the global scope. Thus the only way to return the function inside is by using the public API that reference them.

Nice Gibberish but what is the point ???

Of course my example was very simple, but just imagine how important this method can be when dealing with a robust amount of code on a large project with multiple developers working on it. The module pattern can keep the global scope clean and organize and prevent duplicate variables from overriding each other.

How to glitch video in the age of web

How to Build a Reusable Tab Component In Vue.js