If your IDE requires you to use the keyboard for switching between "modes" instead of just letting you type your code; if your IDE has more colors than your television; if you find yourself configuring your IDE more than once a week: your IDE is probably not the one you should use.

I have commented that I like the acme (resp. the slightly more flexible acme2k) IDE under some recent articles. Let me explain shortly why I like it. I won't waste your time by explaining the installation process here. If you are on Windows (or Debian Linux), you might be interested in my lengthy article on DonationCoder about just that, including some Plan 9 history.

What follows is a screenshot of my minimalistic acme2k setup at work. I usually use Acme's default (yellow/blue) colors instead. 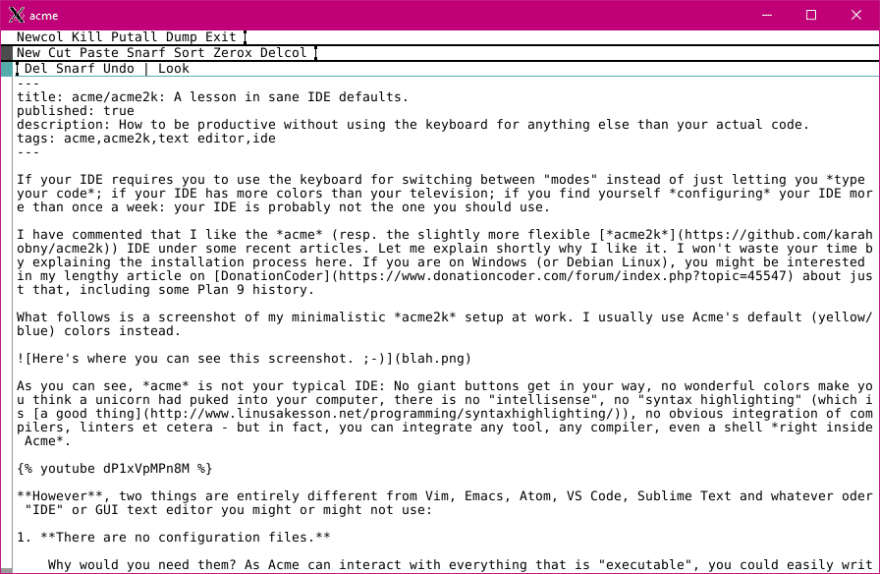 As you can see, acme is not your typical IDE: No giant buttons get in your way, no wonderful colors make you think a unicorn had puked into your computer, there is no "intellisense", no "syntax highlighting" (which is a good thing), no obvious integration of compilers, linters et cetera - but in fact, you can integrate any tool, any compiler, even a shell right inside Acme.

However, two things are entirely different from Vim, Emacs, Atom, VS Code, Sublime Text or whatever "IDE" or GUI text editor you might or might not use:

I will probably reference this article in the future. I hope that anyone cares at all.

What Is Inside My Vimrc

How To Install TinyMCE Editor In Laravel

Once suspended, tux0r will not be able to comment or publish posts until their suspension is removed.

Once unsuspended, tux0r will be able to comment and publish posts again.

Once unpublished, all posts by tux0r will become hidden and only accessible to themselves.

If tux0r is not suspended, they can still re-publish their posts from their dashboard.

Once unpublished, this post will become invisible to the public and only accessible to tux0r.

Thanks for keeping DEV Community 👩‍💻👨‍💻 safe. Here is what you can do to flag tux0r:

Unflagging tux0r will restore default visibility to their posts.