Recently I've been working on an application framework for building command line interfaces and today I'm happy to say that it's out of pre-release! Its goal is to provide a solid abstraction layer over command line arguments while offering a great experience for your users, so that you can focus all your efforts on the actual business logic of your application.

CliFx is a simple to use, yet powerful framework for building command line applications. Its primary goal is to completely take over the user input layer, letting you forget about the infrastructure and instead focus on writing your application. This framework uses a declarative class-first approach for defining commands, avoiding excessive boilerplate code and complex configurations.

An important property of CliFx, when compared to some other libraries, is that it's not just a parser -- it's a complete application framework. The main goal of the library is to provide a consistent and enjoyable development experience when building command line applications. At its core, CliFx is highly opinionated, giving preference to convention over configuration, strictness over extensibility, consistency over ambiguity, and so on. 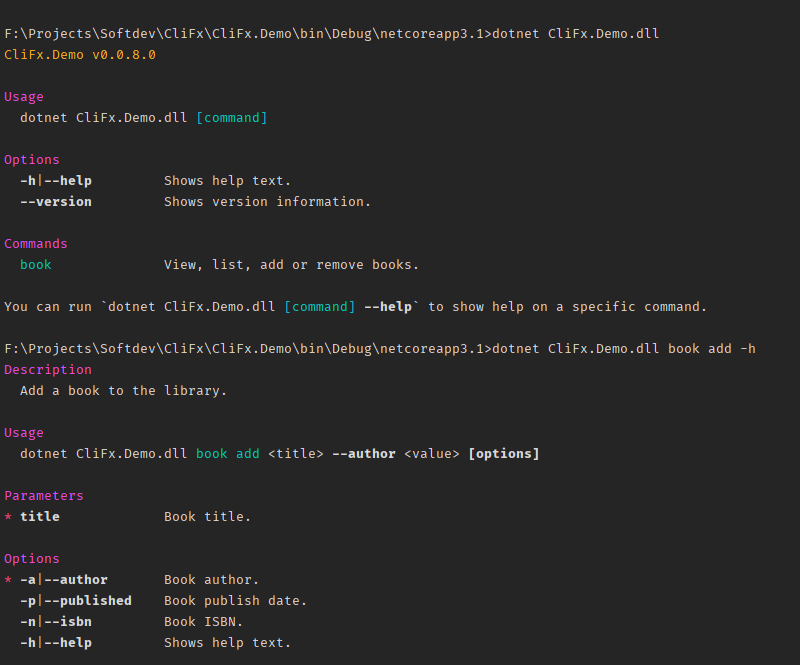 To turn your application into a command line interface you need to change your program's Main method so that it delegates execution to CliApplication.

The following code will create and run a default CliApplication that will resolve commands defined in the calling assembly. Using fluent interface provided by CliApplicationBuilder you can easily configure different aspects of your application.

In order to add functionality to your application, you need to define at least one command. Commands are essentially entry points through which the user can interact with your application. You can think of them as something similar to controllers in ASP.NET Core.

To define a command, just create a new class that implements the ICommand interface and annotate it with [Command] attribute:

To implement ICommand, the class needs to define the ExecuteAsync method. This is the method that gets called when the user executes the command.

To facilitate both asynchronous and synchronous execution, this method returns a ValueTask. Since the simple command above executes synchronously, we can just put return default at the end. In an asynchronous command, however, we would use the async/await keywords instead.

As a parameter, this method takes an instance of IConsole, an abstraction around the system console. You should use this abstraction in places where you would normally use System.Console, in order to make your command testable.

With this basic setup, the user can execute your application and get a greeting in return:

Out of the box, your application now also supports the built-in help and version options:

Commands can be configured to take input from command line arguments. To do that, we need to add properties to the command and annotate them with special attributes.

Here's an example command that calculates a logarithm of a value, which uses both a parameter and an option:

The above command has two inputs:

Let's try running --help to see how this command is supposed to be used:

As we can see, in order to execute this command, at a minimum, the user has to supply a value:

They can also set the base option to override the default logarithm base of 10:

On the other hand, if the user fails to provide the required parameter, they will get an error:

Differences between parameters and options:

This library supports an argument syntax which is based on the POSIX standard. To be fair, nobody really knows what the standard is about and very few tools actually follow it as they're supposed to, so for the purpose of having dashes and spaces, CliFx is using the "standard command line syntax".

In more detail, the following examples are all valid:

Note that CliFx purposely employs a context-free parser when consuming command line arguments. That means that every input is parsed the same way.

This also means that myapp -i file1.txt file2.txt will always be parsed as an option with multiple values, even if the underlying bound property is not enumerable. For the same reason, unseparated arguments such as myapp -ofile will be treated as five distinct options 'o', 'f', 'i', 'l', 'e', instead of 'o' being set to "file".

The above design may seem like a deficiency, but it actually provides value in the fact that it's deterministic -- given a set of command line arguments, the semantics behind them always remain the same. This leads to a more consistent experience for both you as a developer, as well as for the users of your application.

Parameters and options can have different underlying types:

When defining a parameter of an enumerable type, keep in mind that it has to be the only such parameter and it must be the last in order. Options, on the other hand, don't have this limitation.

Example command with an array-backed parameter:

Same command, but using an option for the list of files instead:

Complex command line applications may have more than a single command in order to facilitate different workflows. In even more complex applications there may be multiple levels of commands, forming a hierarchy.

Whichever case it is, CliFx takes care of everything for you. All you need to do is specify appropriate command names in the attributes:

The user can access other commands by specifying the name before any other arguments, e.g. myapp.exe cmd1 arg1 -p 42.

In a multi-command application you may also choose to not have a default command, in which case executing your application without any arguments will just show the help text.

Requesting help on the application above will show:

As you can see, only two commands are listed here because cmd1 sub is not an immediate child of the default command. We can further refine our help query to get information on cmd1:

You may have noticed that commands in CliFx don't return exit codes. This is by design as exit codes are considered a higher-level concern and thus handled by CliApplication, not by individual commands.

Commands can report execution failure simply by throwing exceptions just like any other C# code. When an exception is thrown, CliApplication will catch it, print the error, and return an appropriate exit code to the calling process.

If you want to communicate a specific error through exit code, you can instead throw an instance of CommandException which takes an exit code as a parameter. When a command throws an exception of type CommandException, it is assumed that this was a result of a handled error and, as such, only the exception message will be printed to the error stream. If a command throws an exception of any other type, the full stack trace will be printed as well.

It is possible to gracefully cancel execution of a command and preform any necessary cleanup. By default an app gets forcefully killed when it receives an interrupt signal (Ctrl+C or Ctrl+Break), but you can easily override this behavior.

Keep in mind that a command may delay cancellation only once. If the user decides to press Ctrl+C again after the first time, the execution will be forcefully terminated.

CliFx uses an implementation of ITypeActivator to initialize commands and by default it only works with types that have parameterless constructors.

In real-life scenarios, however, your commands will most likely have dependencies that need to be injected. CliFx doesn't come with its own dependency container but it makes it really easy to integrate any container of your choice.

For example, here is how you would configure your application to use Microsoft.Extensions.DependencyInjection (aka the built-in dependency container in ASP.NET Core).

CliFx provides an easy way to write functional tests for your commands thanks to the IConsole interface.

You can use VirtualConsole to replace the application's stdin, stdout and stderr with your own streams. It has multiple constructor overloads allowing you to specify the exact set of streams that you want. Streams that are not provided are replaced with stubs, i.e. VirtualConsole doesn't leak to System.Console in any way.

Let's assume you want to test a simple command such as this one.

By substituting IConsole you can write your test cases like this:

And if you want, you can also test the whole application in a similar fashion:

Generally, the first approach is more preferable as it's less verbose and lets you test a specific command in complete isolation.

When troubleshooting issues, you may find it useful to run your app in debug or preview mode. To do it, simply pass the corresponding directive to your app along with other command line arguments.

If your application is ran in debug mode (using the [debug] directive), it will wait for debugger to be attached before proceeding. This is useful for debugging apps that were ran outside of the IDE.

If preview mode is specified (using the [preview] directive), the app will short-circuit by printing consumed command line arguments as they were parsed. This is useful when troubleshooting issues related to command routing and argument binding.

You can also disallow these directives, e.g. when running in production, by calling AllowDebugMode and AllowPreviewMode methods on CliApplicationBuilder.

CliFx comes with a simple utility for reporting progress to the console, ProgressTicker, which renders progress in-place on every tick.

It implements a well-known IProgress<double> interface so you can pass it to methods that are aware of this abstraction.

To avoid polluting output when it's not bound to a console, ProgressTicker will simply no-op if stdout is redirected.

An option can be configured to use the value of a specific environment variable as a fallback.

Environment variables can be used as fallback for options of enumerable types too. In this case, the value of the variable will be split by Path.PathSeparator (which is ; on Windows, : on Linux).

Once suspended, tyrrrz will not be able to comment or publish posts until their suspension is removed.

Once unsuspended, tyrrrz will be able to comment and publish posts again.

Once unpublished, all posts by tyrrrz will become hidden and only accessible to themselves.

If tyrrrz is not suspended, they can still re-publish their posts from their dashboard.