There are a lot of benefits to hiring freelance developers, like reduced overhead costs, fast hiring, increased flexibility, as well as taking advantage of global talent. But are these benefits offset by higher hiring costs? Let's find out.

Firstly, freelance software development typically has two major types of payment models. Both vary significantly from each other and each one has its own benefits and drawbacks. Consequently, the opinion has been divided among the freelancing community on what model works the best.

Hence, it’s a case of understanding which one would work better for your particular use-case and be able to suit your exact needs. Let’s start by delving deeper into each of these.

In project-based compensation (or) ‘Fixed Price’ compensation, the freelance developer rates are based on the outcome of the project. Here, you would need to pay a fixed rate to the developer that has been previously agreed upon. The payment is contingent upon the successful and satisfactory completion of the project.

This type of model works well for small cash-strapped startups where strict adherence to keeping a low budget is the number one priority.

However, the pricing in such a model depends heavily on the initial estimates based on assumptions. Throughout the course of the project, there might be some changes and improvements to be made, and the initial assumptions might not hold good later on. Hence, for long-term projects, which require flexibility and re-alignment during the course of the project, fixed price projects are seldom used.

Also, working on a fixed price model can put freelancers in unprecedented pressure when the estimates don’t match with reality during the build. Hence, most freelance developers don’t prefer to work on a fixed-price model.

As we've seen, in project-based compensation, achieving the required flexibility can be very hard due to its rigid nature.

For long-term projects that are highly subjective in nature and often open-ended in certain aspects, a time-based compensation model might be a better fit.

Of course, time-based can also be daily-/ weekly- (or) monthly-fee based in some cases. In such a model, you would be invoiced at regular intervals based on the selected time metric.

The flexibility that a time-based model offers can be invaluable in software development projects, where there are always improvements and changes to be made.

It is important to keep in mind that time-based compensation, though better suited for long-term development projects, does require a reliable, trustworthy, and high-quality developer.

Vetted freelance networks such as Flexiple and Toptal are a good place to find such developers. Such platforms also offer risk-free trial periods, which allow you to try working with a developer before making a final decision.

Hourly-rates are the most popular form of time-based freelance developer rates. This can be attributed to a high level of detail achievable while maintaining documentation. The client can understand precisely what they’ll be getting and how much is being spent on what, paving the way for more accurate development estimates. It also allows the freelance developer to get adequately compensated for the exact amount of hours that they’ve put in.

For software development projects, the outcomes are objective in nature. Hence, hourly-rate based compensation provides the level of detail required to keep a log of each small/ big task completed, and how they add up to larger goals in the project.

These are the broad factors that have an impact on freelance developer rates:

1. Demand for the skill in the market

Freelance developer rates are heavily influenced by the demand for a particular technology. Developers who are skilled in popular and in-demand technologies command higher rates.

A good example to cite here would be the exponential rise of ReactJS in the years 2015-16. Companies began rapidly adopting ReactJS, with burgeoning demand leading to the disproportionate increase in hourly rates for freelance developers skilled in ReactJS.

Of course, alternatively, if a developer possesses a very niche skill which not many do, it allows them to quote a premium rate. However, this is a double-edged sword, as finding a constant flow of projects in niche technologies can be tough.

2. Expertise in the technology and a well-rounded skillset

As one can expect, customers prefer to work with the best developers out there. Therefore, they are naturally inclined to pay a higher rate for freelance developers who are able to demonstrate their expertise in skills and rank among the top candidates.

Prior work on a variety of production-level projects as well as open-source projects – which are usually visible on a developer’s GitHub profile – are indicative of their expertise, and make a case for higher rates.

While past work experience is not a perfect indicator, it does influence a freelance developer’s rates. Typically, clients view higher work experience as a proxy for a developer having a better knowledge of the technologies they work on, better code quality, ability to have a nuanced vision of a product, and so on.

Additionally, customers appreciate and recognize freelance developers who have delivered quality work under other similar conditions. Naturally, these factors lead to increased hourly rates for an experienced developer.

Brand names on a freelance developer’s resume often are indicative of the quality of their experience.

This can be a reputed college where they studied (or) a popular tech company that they previously worked at. Companies treat these brand names as a proxy for the developer’s quality and hence will be ready to pay a premium. Although, this outlook is changing rapidly, and companies are placing decreased relevance to the brand names on a developer's resume.

The average freelance developer rates vary across geographies due to differing living costs across regions. An example of this would be the hourly rates of a developer in Ukraine being considerably lower than those of a similarly-skilled developer present in the U.S. (where the living costs are much higher).

On a parting note, below are the average hourly rates of freelance developers worldwide. We’ve aggregated the data over the past 4 years, and categorised it by geography: 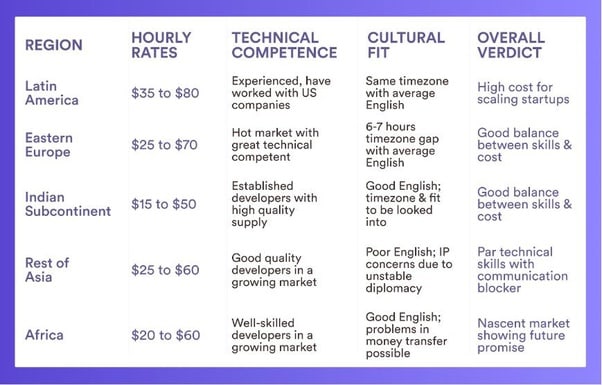 What do I have to start to learn Java?

Why Term Insurance Needs To Be Part Of Your Financial Plan

Once suspended, v20589666 will not be able to comment or publish posts until their suspension is removed.

Once unsuspended, v20589666 will be able to comment and publish posts again.

Once unpublished, all posts by v20589666 will become hidden and only accessible to themselves.

If v20589666 is not suspended, they can still re-publish their posts from their dashboard.

Once unpublished, this post will become invisible to the public and only accessible to Varun.

Unflagging v20589666 will restore default visibility to their posts.