ATDD has been around for awhile now but you’d be surprised by the number of people who still don’t know it. At its heart it means that requirements are executable tests. The business can define requirements, which can be executed by a test automation test framework to demonstrably prove that the delivered software meets the functional requirements. That sounds pretty abstract but don’t worry, we’ll end this post with working code and you’ll see for yourself what how this ends up as code.

The amazing thing about ATDD is that everyone speaks the same language, Gherkin, and that we can automate the testing of the delivered software against those requirements. We’ll cover what Gherkin is too and how is gets translated into code.

But making sure the software does what the client has asked is not the end of the story. Code quality is something that the client often does not see and is difficult to measure (see this resource by SeaLights about measuring code quality). Sometimes it surfaces as a bug or instability, but often it simply shows itself by longer delivery times. It’s hard to measure and therefore hard to prioritize. If you can’t measure it or even define it then it can end up being ignored leading to greater and greater problems. That is where Continuous Testing comes in.

Continuous Testing is the next evolution of automated testing. It means we know the current state of the quality of the code being delivered. It combines test executions, test coverage and a bunch of other metrics into a holistic view of your software. It also means that those automated tests of yours are integrated into your CI/CD pipeline and are run continuously.

Used together you know that your software delivers the functionality requested by the client and that it meets the code quality standard necessary to make the software maintainable going forward.

The Case For ATDD

Your colleagues working in the day-to-day business side of your company do not speak the same language as you the developer. When your company asks for a new application or a new feature, they do so in their own language with business terminology mixed in. They have no idea that what they request is ambiguous or infeasible. So requirements end up ambiguous and lacking in the detail required to turn them into software. Not to mention the forgotten requirements.

ATDD addresses this by writing down all requirements in a syntax called Gherkin. Gherkin is a language that is understandable by both the business and the developer. It is normal language but in a structure that allows it to be mapped to code.

Because we can map it to code, we can automate it and create repeatable, automated tests that prove that the software conforms to a functional requirement. Non-functional requirements are another matter and out of scope. So ATDD brings all parties together in a common vision of the project and tools automate the conformance of this vision.

I have worked with ATDD in two different teams and in my experience:

Also time to market is quicker because:

In this article we are going to build some automated acceptance tests using Visual Studio 2017, MS Test and SpecFlow. The end result will be integration tests that can be executed like any other automated test in a testing pipeline. The differences are that the tests will be the requirements and written in plain English.

Gherkin is the syntax we’ll use to describe our requirements. It allows us to use normal language that the business can understand but that can be hooked up to a test automation framework for execution. While we cover SpecFlow in this article, the important takeaway is how we use Gherkin. Gherkin is the syntax that all the ATDD frameworks use.

If you have ever used the Arrange, Act, Assert (AAA) pattern for clean unit tests then Gherkin will come easily to you. Gherkin uses Given, When, Then which map onto to AAA directly. The Given describes the current state of the system, When describes the action to be taken and Then describes the expected result.

Challenge: We have been tasked with creating the logic for our site login. Users login with a username and a password. In addition to testing that this basic login functionality works, we want to rate limit login attempts.

Add a new Unit Test Project then add the NuGet package SpecFlow to the project.

Finally ensure that in the app.config we use the Mstest test framework.

You could use xUnit or nUnit also.

SpecFlow stores all the Gherkin tests in feature files. Go ahead click Add New Item and add a feature file to the project called BasicLogin.feature. 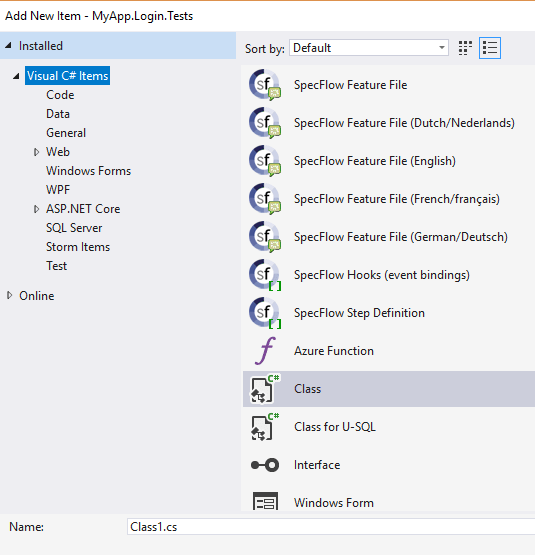 Replace the existing text with a new feature description and a single gherkin scenario:

As you can see the scenario clearly describes the functional behaviour expected. This is easy for a business analyst and a programmer to understand.

Now we need to turn that Gherkin into executable code. Right click on some text in the feature file and click Generate Step Definitions. In the new window click Generate.

You will now have a C# steps class without any logic, but with methods and their arguments bound to the gherkin Given, When, Then lines.

We can run our Gherkin scenario and SpecFlow has hooked it all up and we get string arguments with the values of our Gherkin lines!

Now we need to do something with it. In this toy example, credentials are stored in an in memory dictionary.

In the Then method we compare what we stored in the ScenarioContext with what the Gherkin scenario expects.

What is really nice about this is that I can now add a few more Gherkin scenarios and not change this C# code at all. Which is great for productivity and clean code.

Step 5 - Add more scenarios without the need for more C

So far we have seen the feature description and scenarios. Each scenario has a @tag for organising the tests, and a Given, When, Then structure.

Now we are going to look at Backgrounds. Sometimes you end up with the same Given over and over again. In these cases you can reduce duplication by adding a Background to your feature.

As we need the user John for each scenario we put it in the feature Background and avoid the repetition. When we generate the steps class you’ll notice that the Background givens are not included as they already exist in the BasicLoginSteps.cs.

Also new in this feature is the use of comma separated list values. But it doesn’t get parsed into a List by default. The C# for the When with the CSV value are bound to a string argument.

This can be modified to:

You want that TransformToListOfString method in a separate helper class as it will be need by multiple steps classes. Just remember to add the [Binding] attribute to the class so that SpecFlow can find it.

When we have very data driven acceptance tests, a table is more readable and generally easier to work with.

We can use tables in two ways:

Let’s make a table based version of our BasicLogin feature.

The background creates the three users and their passwords. The scenario gets executed three times, with the values specified in the Examples table. This makes some tests even easier to read and faster to write.

The C# behind the scenario is the same as our original steps class because it still works with individual variables. Whereas the Given in the Background accepts a Table as a method argument.

If we create a UserRecord class, we can cast this table to a List. You need to add the line using TechTalk.SpecFlow.Assist; to your class.

Step 8 - Add your tests to your testing pipeline.

Because the SpecFlow tests are treated like any other unit or integration tests they integrate into your existing testing pipeline like any other test. You can now get immediate feedback every time there is a code check-in.

Continuous Testing is a must in modern software development. With the use of Acceptance Test Driven Development you see major improvements in code quality and reduced time to market. Frameworks like SpecFlow make it so easy to do! Combine that with other code quality indicators, code coverage and other testing metrics and you reduce the risk involved with each software project. Developers are happier, QA is happier and your client is happier.

Engineer and geek. I like distributed systems, software architecture, algorithms.

How are you testing your code in development for microservices?

Trending on DEV
Why I live as root
#unix #security #productivity
Writing Test Cases using Python with Selenium
#webdev #testing #python #beginners
Angular-Testing-Library
#angular #testing #typescript #javascript
How do you avoid rabbit holes?
#productivity #discuss
Chingu Cheetah Dash Prep-pack (so you don't freak out before we start)
#career #build2learn #projects
What are your favorite bash aliases?
#bash #linux #discuss #terminal
What was your win this week?
#discuss #weeklyretro
I never deploy on Fridays, but when I do...
#devops #discuss