Ever since AWS released Rust runtime for AWS lambda I've been wanting to try it out. In this article I am going to walk you through every step required to write and deploy a lambda written in Rust to AWS.

To avoid building yet another boring hello-world-like handler, we will build a n a n o s e r v i c e that takes an image and returns a glitched version of it (which you can use as a profile picture etc. but that is up to you). Pretty useless in isolation but still fun and just enough for a good walkthrough.

Let's build the core of our API: a glitch function. Actually, two glitch functions. I must warn you that I'm not a professional glitch artist and that there is a lot of depth to glitch art, but the two simple tricks below will suffice. One trick is to just take a byte of the image you want to glitch and replace it with some random byte. Another trick is to take an arbitrary sequence of bytes and sort it. Rust does not come with a random number generator so we need to install it first:

And here's the byte-replacing glitch function. We put it in src/lib.rs.

Nothing extraordinary here, we just take a reference to our image as a mutable slice of bytes and replace one. Next is the sort glitch:

Again there is nothing complicated here. Note a very convenient split_at_mut method that easily lets us select the chunk we want to sort. CHUNK_LEN is a variable in the sense that you can try different values and expected different glitch outcomes. I randomly chose 19.

Finally, for more noticeable effect we apply these two functions multiple times as steps of one big glitch job.

Next we move on to building a lambda.

These are the minimal dependencies we'll need.

lambda_runtime is the runtime for our functions. This is required because Rust is not (yet) in the list of default runtimes at the time of writing. It possible, however to BYOR (bring your own runtime) to AWS and that's what we're doing here. lambda_http is a helper library that gives us type definitions for the request and context of the lambda. tokio is an async runtime. Our handler is so simple that we don't need async but lambda_runtime requires it so we have no choice but to play along. Just in case you are unfamiliar with it think of it as a library that runs Rust futures. We won't need to worry much about async apart from defining our functions as async. Finally, there is jemallocator. We will get to it later.

Alright, we have a glitch function but how do use it in our request handler? Let us define apply_glitch handler that takes the request, extracts image bytes from the body and copies the glitched version into the response.

Note the useful IntoResponse trait that allows us to just return things like Strings and Vec<u8>s without thinking much about response headers.

Next, we need to simply wrap our actual handler in a lambda_http::handler. This creates an actual lambda that can be run by the lambda runtime we installed. Literally two lines of code to hook everything up.

Don't forget the #[tokio::main] bit. This is an attribute macro from tokio that does some magic under the hood to make our main function async. The #[global_allocator] part is also needed to make the lambda work but we will get to it later.

There are multiple ways to deploy this to AWS. One of them is using the AWS console. I find the console confusing for many tasks, even simple ones, so I am very excited that there exists another way: CDK. It is a Node.js library that allows us to define the required AWS resources declaratively with real code. It comes with TypeScript type definitions so in a lot of cases we don't even need to look into the documentation.

The only downside of CDK is that it requires a couple things in our local environment: aws CLI and Node.js. Make sure the CLI is configured with your credentials. Next, install CDK:

CDK requires that some resources exist prior to any deployments like buckets that your CDK output (which is basically a CloudFormation stack) and other artifacts like Lambda functions are uploaded to. This is done with bootstrap command.

Now we are ready to create a new CDK project which is responsible for deploying our lambda to the cloud. Create a lambda folder (or choose whatever name you want) in the root of your Rust project and execute the following command in it:

This will generate all the files we'll need. Open lambda\lib\lambda-stack.ts which should look like this:

Let's check that everything is OK by running cdk synth which does a dry run and shows you the CloudFormation code it would generate. Right now, there is not much we can do without installing additional constructs - the basic building blocks of AWS CDK apps, so let's do it first.

Import these in your lambda/lib/lambda-stack.ts:

Now we can actually define a lambda function inside the constructor above:

code is where our binary lies (we will get to it soon). handler, normally, is the name of the actual function to call but it seems to be irrelevant when using custom runtimes, so just choose any string you want. Finally, runtime is PROVIDED_AL2 which simply means we bring our own runtime (which we earlier installed as a Rust dependency) that will work on Amazon Linux 2. Just a lambda is not enough, however. Lambdas are not publicly accessible from outside of the cloud by default and we need to use API Gateway to connect the function to the outside world. To do this, add the following to your CDK code:

This code is pretty self-explanatory. It creates an HTTP API Gateway that will trigger our lambda, glitchHandler, which we defined above, on incoming requests. Note how CDK makes it easy to refer to other resources: by using actual references within code.

We're almost ready but we need to make sure that CDK can see and upload our lambda binary. Normally Rust puts the build output inside target/ folder and gives it the same name as your package name:

One weird thing about AWS Rust lambdas is that the binary needs to be named bootstrap. To do this, we need to add some settings to Cargo.toml:

This takes care of the name. Next, we could also change the output folder to artifacts so CDK can see it and cargo build the project directly but let's imagine that you want to work on this project in different environments. The bootstrap binary actually MUST be built with x86_64-unknown-linux-gnu target. This is not possible on e.g. Windows, so let's use Docker!

If you've ever used Docker with Rust you probably know that compiling can be painfully slow. This is because there is no cargo option to build only dependencies at the moment of writing.
Luckily, there is a very good project cargo-chef that provides a workaround. Here's how we use it in our Dockerfile (mostly copy-paste from the project's README):

With this, if we run:

Docker will build a x86_64-unknown-linux-gnu binary and put it inside artifacts folder. Finally, CDK has all it needs to successfully deploy our lambda! So let's do it (you need to be inside the lambda folder):

Ideally we want to know the URL of our API Gateway immediately and there is a nice way to make CDK output this info by writing a couple more lines:

Now if we add the --outputs-file option to the cdk command like this:

we will see a lambda/cdk-outputs.json file that has the URL inside:

That was a lot of work but now we can finally call our glitch API. It would be mean of me to not share a working link here as well. So here's the command that you can try right now to get a feel of the API:

I cannot guarantee that the service is going to be always up, though.

Generally, to use the API ypu need to prepare an image file you want to glitch and do this:

You should see a glitched.jpg file that is glitched and hopefully looks aesthetically pleasing! Now that everything is working, you can play with the settings like the number and order of glitches, the size of the chunk that is sorted etc. If you know other simple ways to achieve nice-looking glitches, feel free to tell me on Twitter!

Here are some of my favorite glitches I generated while playing with the API. 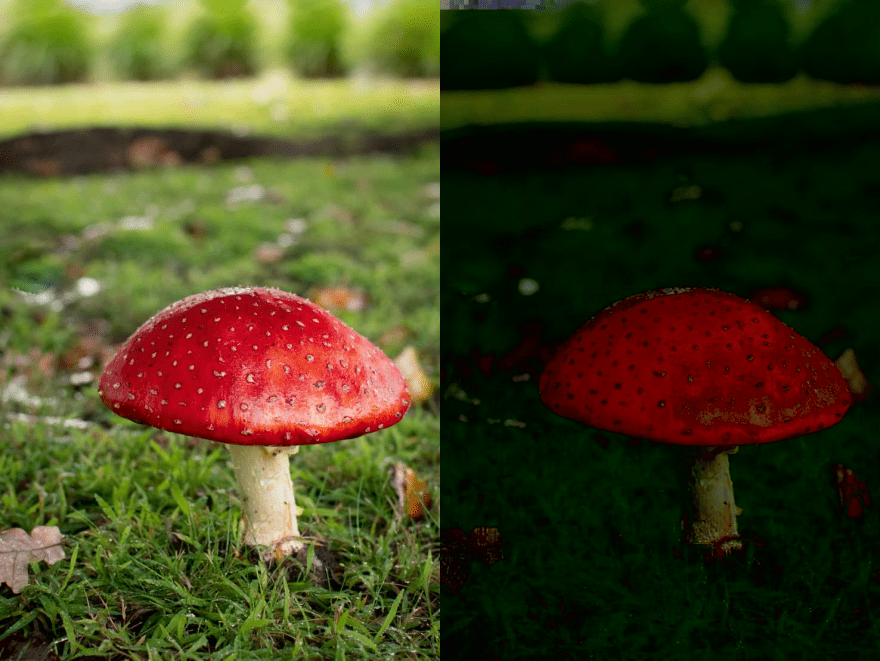 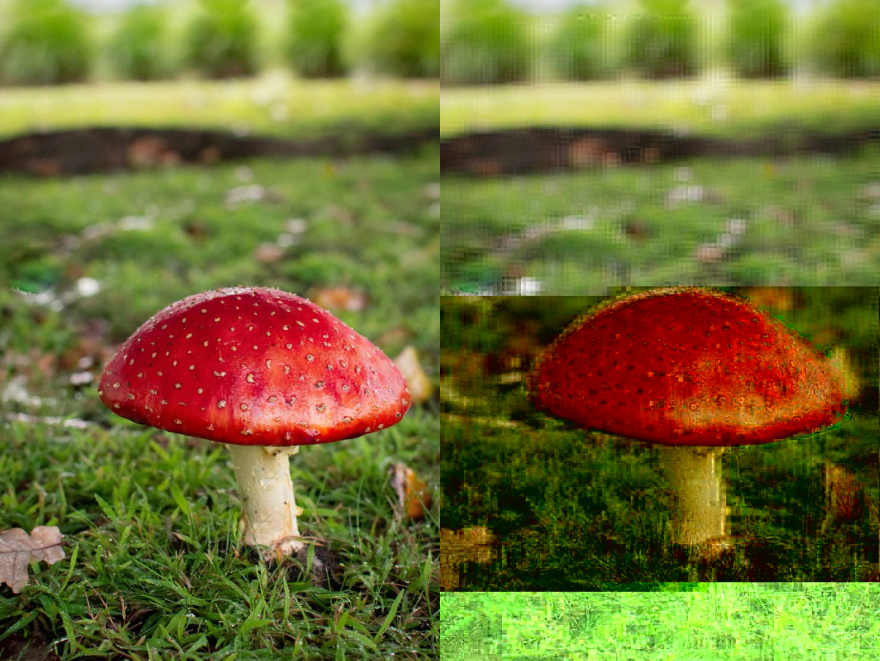 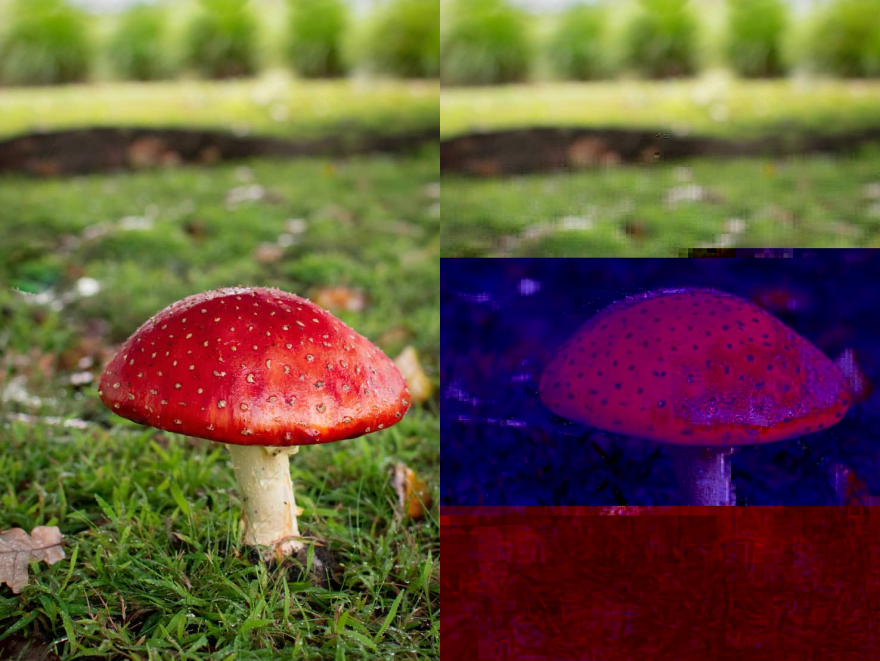 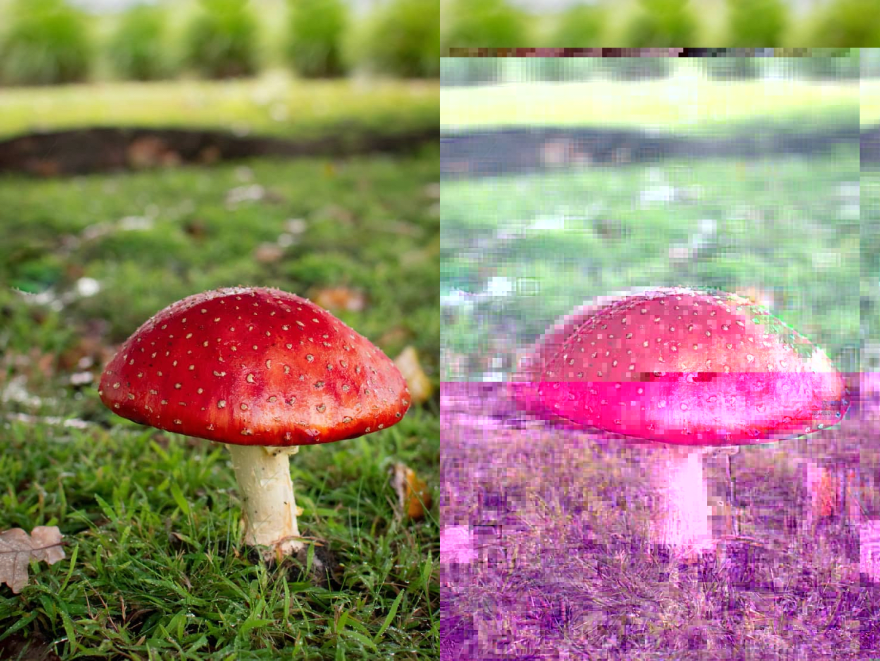 Wait...what about jemallocator? Oh yes, I promised to explain this as well. So, it seems that for quite a long time AWS lambdas needed to be built for x86_64-unknown-linux-musl target. This was a pain because it needed a musl toolchain which is not available by default. However, it looks like now you CAN use x86_64-unknown-linux-gnu but with a caveat: you need to use jemallocator. This is literally just one install and one more line to your code. The default allocator Rust uses on Unix platforms is malloc. I do not know if this limitation will disappear in the future.

Once suspended, virtualkirill will not be able to comment or publish posts until their suspension is removed.

Once unsuspended, virtualkirill will be able to comment and publish posts again.

Once unpublished, all posts by virtualkirill will become hidden and only accessible to themselves.

If virtualkirill is not suspended, they can still re-publish their posts from their dashboard.

Once unpublished, this post will become invisible to the public and only accessible to Kirill Vasiltsov.

Thanks for keeping DEV Community 👩‍💻👨‍💻 safe. Here is what you can do to flag virtualkirill:

Unflagging virtualkirill will restore default visibility to their posts.