In this tutorial, we’ll learn some simple techniques for developing scalable design systems using React and utility-first UI framework called Tailwind. Building a design system is not just about choosing the right fonts, spacing, and colours. A good implementation of a design system provides building blocks—like Legos—for engineers to fit components together into usable and delightful products.

We’ve chosen five tools to flesh out our design system:

In the rest of this article, we’ll piece together these three tools to build a sound design system.

Let’e first examine what we want as part of a flexible Lego-like design system:

To make this tutorial shorter and more focused, there is a bootstrap repo for you to start, clone this repo, checkout to the zero branch (git checkout zero ) and you’ll have everything you need to follow along.

Because we can’t really build a fully functioning design system from scratch, the scope of this tutorial is to:

The lessons you learn here can be valuable in composing many such components together to build a complete design system.

A design system usually starts with a colour palette. How do you model that in code? Let’s start by creating a folder src/themes and creating a file called Theme.ts there. This is going to be our type definition file for our design system:

Note that the first [key: string]: string | number definition is just so that we can access theme keys using an index notation, like theme["actionColor"]. As we’ll see later in the article, this makes accessing properties simpler when you pass in semantic roles to your components.

Now we can then make a concrete implementation of this theme by building a concrete lightTheme.ts in the same folder, and defining these colours in terms of their Tailwind notation:

We’re borrowing inspiration from the Clarity design system here, but these colours can be anything decided by your design team. Tailwind has a mechanism for extensive customisation of colours, and indeed, pretty much anything. For the purposes of this article, we’ll stick to the basic Tailwind palette.

Note that in Tailwind, colours are made up of 2 values, a shade (grey, purple, and so on), and an intensity level (from 100-900), that is very similar to the lightness parameter in the LCH colour scheme. So to model a complete colour for an interaction state (such as a default state, hover state, a selected state and so on), you need both a shade, and an intensity. Since the shade is decided by the role of the element, the intensity can decide how it’ll change based on interaction state. That gives us a pretty elegant theme design:

Now let’s look at building a component with this typed theme.

We’re going to build a simple Button component using the above theme definition. To do that, create a file called Button.tsx in src/.

There’s a bit to parse here, so let’s take this line by line:

This is a standard storybook file with some addons configured: we have a text knob here for button title, and two variants Action and SecondaryAction that tweaks the roles accordingly. Let’s now run yarn storybook and see how this component looks: 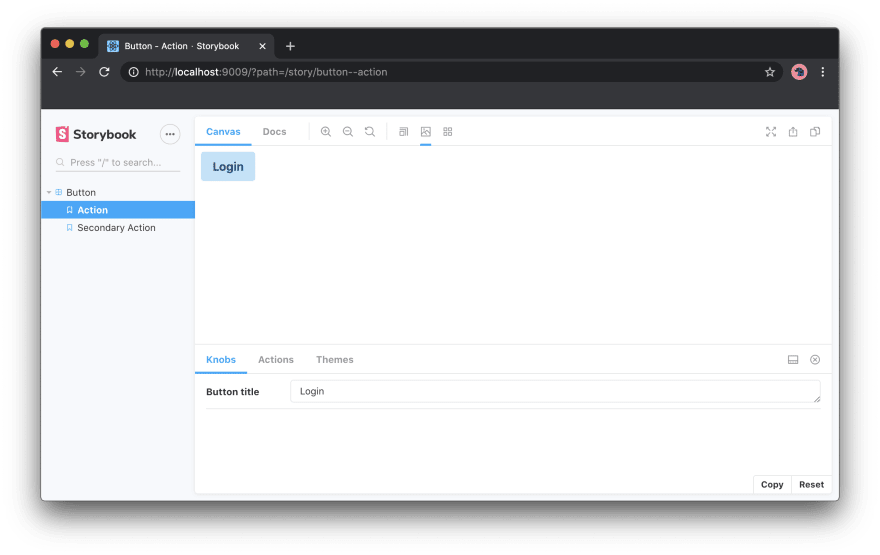 Note that Storybook also provides a lot of conveniences for building a component. Let’s say you want to build a responsive component, there is a viewport add-on configured in the project that helps you see a mobile layout: 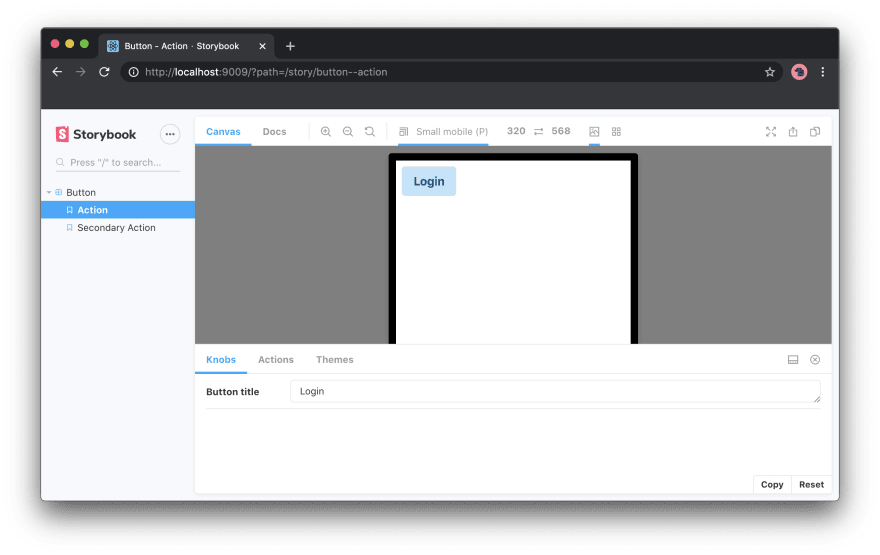 In this article, we learnt how to build a simple Component using a typed design system. To build a next component, and then to build layouts and pages on top of that component, here are the steps you should follow:

Have fun, and happy theming!

Once suspended, vishnugopal will not be able to comment or publish posts until their suspension is removed.

Once unsuspended, vishnugopal will be able to comment and publish posts again.

Once unpublished, all posts by vishnugopal will become hidden and only accessible to themselves.

If vishnugopal is not suspended, they can still re-publish their posts from their dashboard.

Once unpublished, this post will become invisible to the public and only accessible to Vishnu Gopal.

Thanks for keeping DEV Community 👩‍💻👨‍💻 safe. Here is what you can do to flag vishnugopal:

Unflagging vishnugopal will restore default visibility to their posts.