You know when you load a website and it has a bunch of fancy visualisations that respond to mouse and scroll position with animation? For most of the web's history creating experiences like these has either been impossible or required masochistic determination. 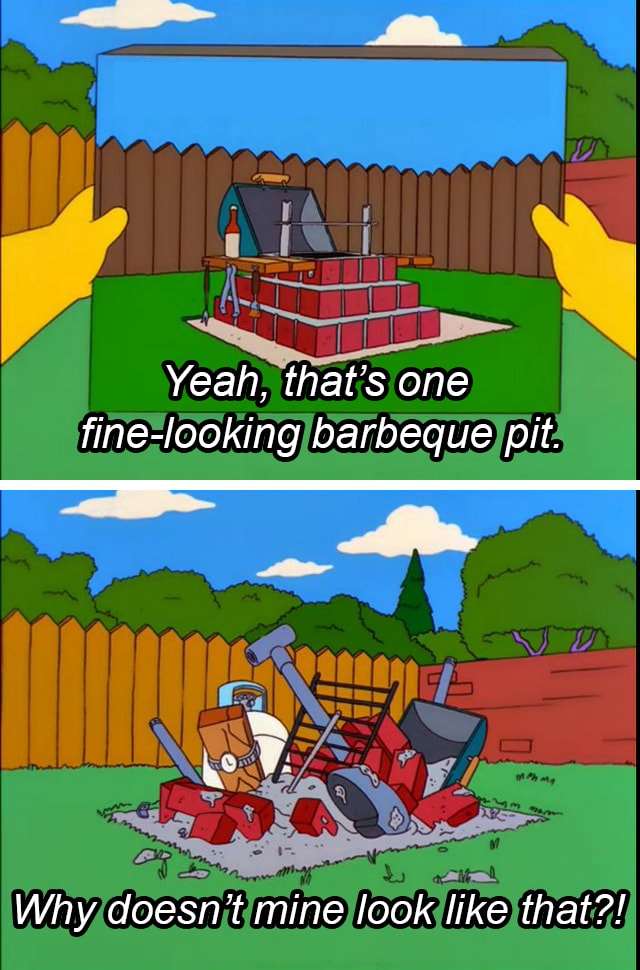 Trying to replicate an apple.com product page is an extreme test of sanity

It used to be difficult to create pretty much any interface in the browser. Efforts like React, Vue, Svelte, Solid and friends have trivialised the jQuery battles of the past. Now we can express our interfaces declaratively, as a function of state -> view.

In fact React has even let us port this idea to the third dimension with react-three-fiber; a wonderful library that uses three.js as a custom React render target.

This is, in my opinion, staggeringly little code to implement in-browser 3D. We get a lot for free here courtesy of React's Virtual DOM (VDOM) diffing, suspense and state management. However, there is a sticking point.

VDOM style renderers are surprisingly fast given what they do, but sadly they are not quite fast enough for state that changes 60 times a second; the standard for "smooth" animation.

The Future of User Interaction on the Web

I've been wondering, with libraries like react and react-three-fiber combined with rising support for webgl, wasm and wgpu, are we on the path to far richer interactions in the browser? As a game developer I work with a few common game engines and none of them can be considered "declarative". In a typical game the graph of data dependency is far wider and denser than a typical web app and as a result most game engines prioritise performance over clarity. So, how can we get the best of both worlds? Declarative, composable animation logic that reacts to 60hz (minimum!) state updates.

In turn, it's common for us developers to lean on existing libraries to get the job done. framer-motion, react-spring and GSAP are great libraries, but we can learn a lot more about animation by implementing our own approach. What's more almost all animation libraries require us to work with someone else's conceptual model of user input. They provide extension APIs of course but we tend to implement each of these as closed-box concepts, you can consume them but not compose them freely.

A contrived but illustrative example: animating positions of 3D objects that are derived from one another and play sound effects based on their progress. This is difficult to implement in many libraries because of built-in assumptions about the kinds of animation we'd like to do and how to compose them.

Recently I came across samsarajs, a library designed for continuous user interfaces. That is, interfaces that may never be "at rest" and are constantly reacting to changes in data. The project is rooted in functional reactive programming or FRP.

Briefly, FRP is focused on one main concept: the data stream.

What values? How much time? Those are up to the specific instance. Libraries like rxjs provide an algebra for working with streams, letting us mix them together, pluck out select elements and aggregate data over time. Others have explained streams far better than I can.

In my experience reactions to FRP are mixed. Many people are scared away by its abstract nature, some fear it encourages tightly wound spaghetti code and a dedicated few believe it is the future of programming. I think it's all of the above, FRP is powerful and like any powerful abstraction it is open to abuse. When you have a nuclear-powered ultra-hammer everything looks like an ultra-nail.

Regardless, samsarajs's fundamental insight is that the layout of an application can be modelled as a stream[ref]. Selfishly, I immediately wondered if I could apply this to my problem.

Animation can also easily be modelled as a stream[ref], it's almost in the definition:

Animation anɪˈmeɪʃ(ə)n
A series of frames shown in succession over time, creating the illusion of movement.

Combining this with input streams from the user we can create a unified model of user intention -> data mutation -> animated visualisation. 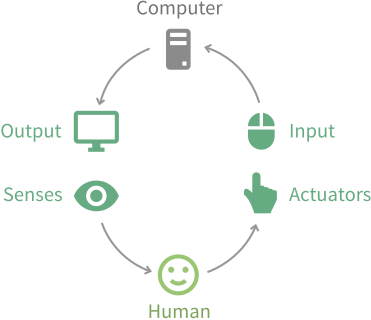 The "dialogue" abstraction, image provided by the cycle.js docs.

This model is heavily inspired by cycle.js which is one of the most mindblowing frameworks around even after 7+ years of development. The cycle described by cycle.js from sources to sinks is a conceptual model that I find myself using in every interface, generative artwork or game I create.

So with all that said, is there a way to use FRP and react-three-fiber to create performant, declarative animations? Let's find out.

Alright, here's the meaty part. I'm using React and react-three-fiber for rendering and rxjs to provide our streams. My implementation focuses on a three core concepts:

You might've heard of observables before, the base concept is simple:

Observable əbˈzəːvəbl
A variable which notifies subscribed listeners when the internal value is changed. Listeners can subscribe and unsubscribe from change notifications on demand.

In this case, calling scale.set(2) or scale.swap(x => x + 1) will change the underlying value and send an update event down the scale.changes stream.

In ReactiveX terminology, this is a Subject<T> wrapped up for easy consumption from React.

An interpolator acts as a translation layer between different numerical ranges. They typically take the form of functions accepting take a value, t, from 0...1 and output a value of t from 0...1. This might sound familiar if you've heard of easing functions, which are almost ubiquitous in programmatic animation:

Comparison of various common easing functions, via Noisecrime on the Unity Forms

Our interpolators are almost identical except for two important properties:

This is important when we apply an animation. We'll animate values with certain curves between 0...1 but in practice we want to translate that into whatever range is relevant. We might want to animate a box's width between 32px and 400px but until the point of actually applying the animation we can preserve our sanity by using the normalised 0...1 range.

You can combine interpolators in many useful ways. We might want to add them together, subtract them, multiply them or sequence them one after the other.

Currently I've only written the sequence composition, but it demonstrates the principle.

Finally, the hook that connects it all together. useAnimation takes an observable value, an interpolator, the duration in milliseconds and a function to apply the animated value.

The value => {} callback is the application site of our side effects, in FRP terms this is known as a sink. Before this function is called all we are doing is changing some numbers in memory over time using an animation curve defined by our interpolator, but our sink is where we connect to our output.

This may feel a little "bare metal" on first inspection, but I would argue this approach is vital for practical usage. A simple adjustment allows us to use this same animation with react-three-fiber or react-dom, retargeting only the binding layer.

This approach gives us maximum control and flexibility without compromising on performance. You can imagine packaging these value => {} callbacks into common pieces scaleDom, rotateDom, updateShaderUniform etc.

Here's an example sketch I made using this API (try moving your mouse around, panning, zooming etc.):

The source for this entire article including the above sketch is public on github.

I'm not ready to publish useAnimation as a library on npm just yet, I'd like to explore the API surface more and put together documentation / examples. That said, you can poke around the sourecode yourself on github and come back if you're confused / curious to know more.

I started with, "what happens when a value we want to animate changes?" Well, we emit a change event on our .changes stream. Okay, so then from that change event we need to start an animation from the current value to the new value. As expressed earlier, an animation is a stream of frames... So we need to get one of those.

Thankfully Subject<T> from rxjs has us covered yet again. If we create a new Subject, we can call .next() on it to emit a new value whenever we want. So, if we combine a Subject with requestAnimationFrame we will have a new value published on every renderable frame the browser gives us.

This is a little gnarly in practice, but luckily I found an example from learnrxjs.com that worked perfectly. My version is in frameStream.ts and is identical except I don't clamp the framerate to 30.

The implementation for react-three-fiber turned out to be more challenging, I ran into issues asking for multiple requestAnimationFrame loops. So, instead, I built on top of useFrame to construct a stream held in a React MutableRef<T> in a similar way:

Okay, so we've got our framestream. Let's look at useAnimation and break it down piece by piece.
We'll start by let's identifying some familiar concepts:

As stated above, all the code for this experiment is available on github with an MIT license.

If you want to go deeper again then check out the project README and samsarajs. I'd like to try @most/core instead of rxjs here since it boasts impressive performance[ref]. To me, this seems like a promising area for further investigation. I've begun to experiment with a similar approach in Unity3d, hopefully more to report soon! 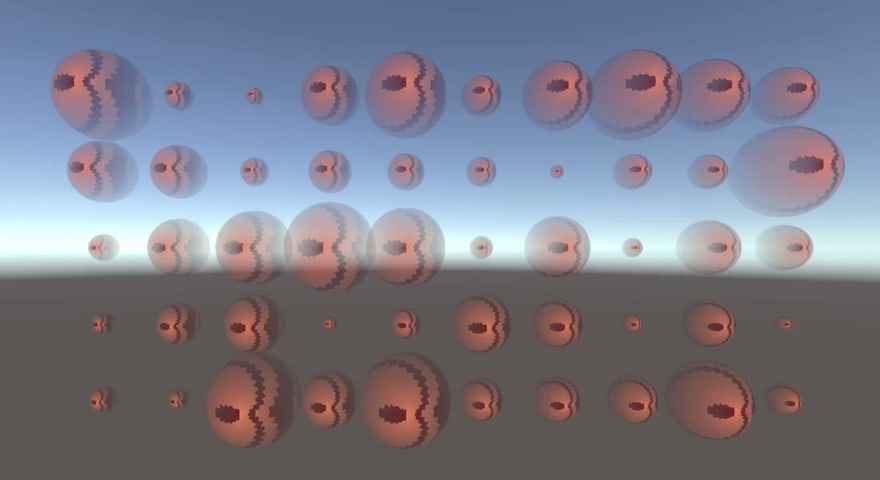 I've been experimenting with porting my reactive animation code to unity, some success so far!

All of this is simply me adding, changing and removing values from a list and the animations are all automagically applied/interrupted

This is the first post from my new project ⊙ fundamental.sh where I'm attempting to document my favourite abstractions and programming patterns. Please don't hesitate to get in touch with me with feedback, ideas for extension or questions. You can find me on twitter, discord (ben#6177) or around the web.

How to Build a Lava-Lamp Style Navigation Menu with React

Logging for your frontend apps

Once suspended, vivavolt will not be able to comment or publish posts until their suspension is removed.

Once unsuspended, vivavolt will be able to comment and publish posts again.

Once unpublished, all posts by vivavolt will become hidden and only accessible to themselves.

If vivavolt is not suspended, they can still re-publish their posts from their dashboard.

Once unpublished, this post will become invisible to the public and only accessible to Ben Follington.

Thanks for keeping DEV Community 👩‍💻👨‍💻 safe. Here is what you can do to flag vivavolt:

Unflagging vivavolt will restore default visibility to their posts.