The main, if not the only, purpose of the Computer is computing information. It doesn't always have to be a computation of mathematic formulas. In general, it is a transformation of one chunk of information to another. Computers work only with such information that can be represented as discrete data. The input and output for the compute engine is always Natural numbers or text (a sequence of symbols from a dictionary which corresponds to certain natural numbers).

While data is unstructured, it's hard to recognize some sense in it. But once data gets any structured form, it becomes meaningful and suitable for further transformation.

The simplest form of data organization is Type. In general, a Data Type determines a set of values with certain characteristics. Usually, it defines a size in bytes. A Primitive Data Type is an ordered group of bytes. When a variable of some primitive data type has only one value (holds only one piece of information), it's called a Scalar and a type - Scalar Data Type. Well-known examples are integer, float, pointer, and string. A collection of primitive data types is known as Structured Data Type and it makes possible to store multiple values. Good examples of this type are array, struct, record, and file. The key property is the ordered byte's group. The internal organization is straightforward and all actions (e.g. reading, modifying) are performed directly on the data, accordingly to a hardware architecture that defines the byte order in memory (Little-/Big- Endian).

The next layer of data abstraction is called Data Structure. It brings more complexity but also more flexibility in making the right choice between an access speed, an ability to grow, a modification speed, etc. Internally, it's represented by a collection of the scalar or structured data types. The main focus is on details of the internal organization and a set of rules for controlling this organization. There are two types of data structures which come from a difference in a location in memory of underlying elements:

A higher level of data abstraction is represented by Abstract Data Type (ADT) which shifts the main focus from "how to store data" to "how to work with data". An ADT is defined by operations (functions) for manipulating data and controlling its consistency, and data structure for actually storing information. The internal data representation is hidden from users, and should not be accessible directly (by design). All interactions with data are done via an interface (operations exposed to users). Usually, for every ADT there are defined a few primitive operations, like

The most known examples of ADTs are stack and queue. Both of these ADTs can be implemented using either array or linked data structures and both have certain rules for adding and removing elements. All these specifics are abstracted as functions, which in turn, do appropriate actions on internal data. Dividing an ADT into operations and data structure creates an abstraction barrier and allows to keep a solid interface with the flexibility for changing internals with no side-effects on code which uses this ADT.

A more comprehensive way to abstract data is represented by Objects. An object can be thought of like a container for a chunk of data that has some certain properties. Similarly to the ADT, this data is not accessible directly (known as encapsulation or isolation), but instead each object has a group of tightly attached Methods, applicable to operate on its data to produce an expected behavior for this object (known as polymorphism). All such methods, in fact, are simply functions which are collected under a Class, but they become methods when are called to operate on a certain object. Methods can also be inherited from another class which in this case is called a superclass. In contrast to an ADT, an object doesn't represent one particular type of data, but it's rather an essence that has a number of Attributes and behaves as it's supposed to when its methods are invoked. Attributes are nothing more than variables of any types (including ADTs), and they are also collected under a class. Formally speaking, classes act as specifications of all object's attributes and methods which may be called to deal with those attributes.

The Object-Oriented Programming paradigm (OOP) uses objects as the central element of program design. In contrast to the Procedural Programming paradigm, where the main focus is on splitting projects up into mostly independent tasks, in OOP, programs are composed of a number of objects. Each object is seen as an instance of some class which defines its behavior. In general OOP design, objects are used to: 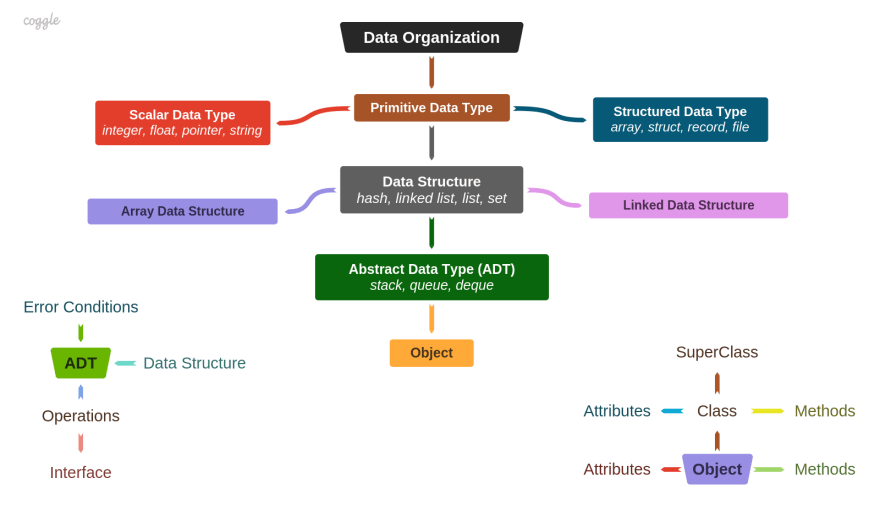 Why is Python Programming for Data-driven Enterprises?

vorakl
https://vorakl.com/about/
The zoo of binary-to-text encoding schemes
#programming #binarytotext #base64 #base85
Convert binary data to a text with the lowest overhead
#cs #programming
Computer Science vs Information Technology
#cs #it #mindmap

Once suspended, vorakl will not be able to comment or publish posts until their suspension is removed.

Once unsuspended, vorakl will be able to comment and publish posts again.

Once unpublished, all posts by vorakl will become hidden and only accessible to themselves.

If vorakl is not suspended, they can still re-publish their posts from their dashboard.

Once unpublished, this post will become invisible to the public and only accessible to vorakl.

Thanks for keeping DEV Community 👩‍💻👨‍💻 safe. Here is what you can do to flag vorakl:

Unflagging vorakl will restore default visibility to their posts.