In my opinion, most Machine Learning tutorials aren’t beginner-friendly enough.

Last month, I wrote an introduction to Neural Networks for complete beginners. This post will adopt the same strategy, meaning it again assumes ZERO prior knowledge of machine learning. We’ll learn what Random Forests are and how they work from the ground up.

A Random Forest 🌲🌲🌲 is actually just a bunch of Decision Trees 🌲 bundled together (ohhhhh 💡 that’s why it’s called a forest). We need to talk about trees before we can get into forests.

Look at the following dataset: 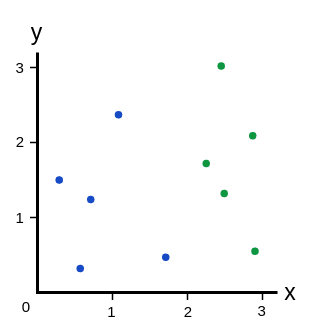 If I told you that there was a new point with an x coordinate of 1, what color do you think it’d be?

You just evaluated a decision tree in your head: 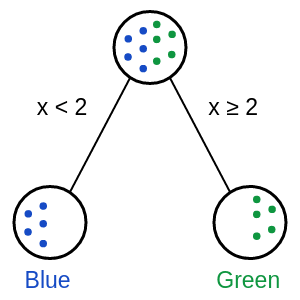 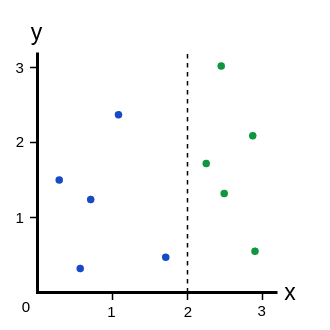 The Dataset, split at x=2

Decision Trees are often used to answer that kind of question: given a labelled dataset, how should we classify new samples?

Labelled : Our dataset is labelled because each point has a class (color): blue or green.

Classify : To classify a new datapoint is to assign a class (color) to it.

Here’s a dataset that has 3 classes now instead of 2: 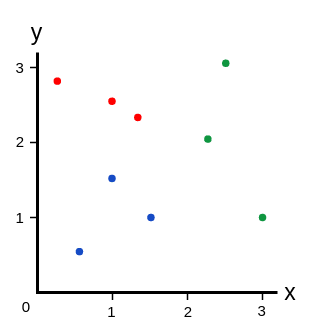 We need to add another decision node to our decision tree: 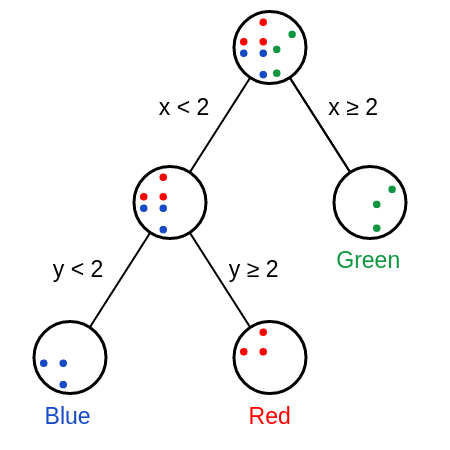 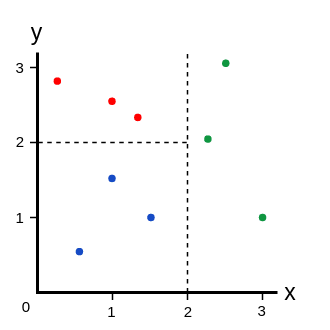 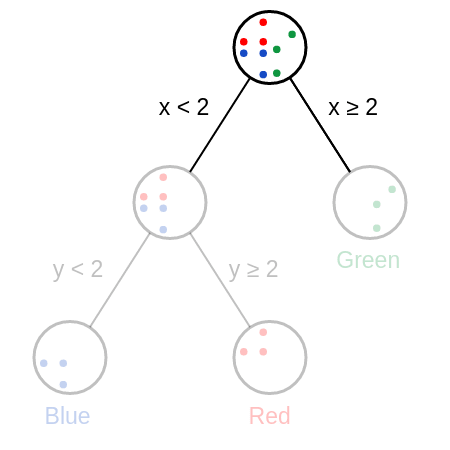 Thus, our goal is now to pick a root node that gives us the “best” split possible. But how do we quantify how good a split is? It’s complicated. I wrote an entire blog post about one way to do this using a metric called Gini Impurity. ← I recommend reading it right now before you continue - we’ll be using those concepts later in this post.

Hopefully, you just read my Gini Impurity post. If you didn’t, here’s a very short TL;DR: We can use Gini Impurity to calculate a value called Gini Gain for any split. A better split has higher Gini Gain.

Back to the problem of determining our root decision node. Now that we have a way to evaluate splits, all we have to do to is find the best split possible! For the sake of simplicity, we’re just going to try every possible split and use the best one (the one with the highest Gini Gain). This is not the fastest way to find the best split , but it is the easiest to understand.

For example, here are the thresholds we might select if we wanted to use the x coordinate: 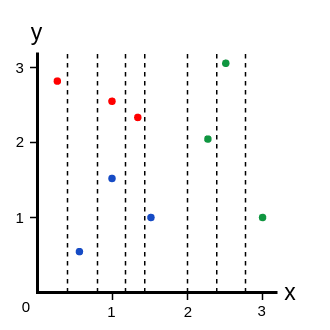 Let’s do an example Gini Gain calculation for the x=0.4 split.

First, we calculate the Gini Impurity of the whole dataset: 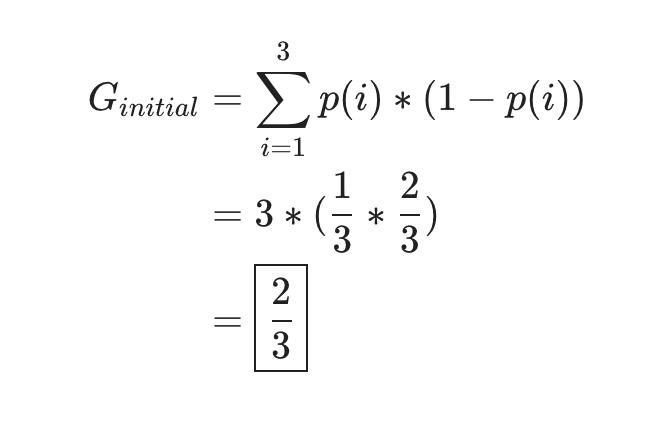 Then, we calculate the Gini Impurities of the two branches: 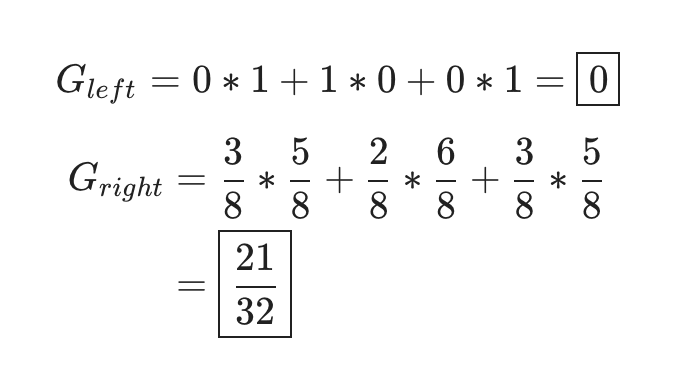 Finally, we calculate Gini Gain by subtracting the weighted branch impurities from the original impurity:

Confused about what just happened? I told you you should’ve read my Gini Impurity post. It’ll explain all of this Gini stuff.

We can calculate Gini Gain for every possible split in the same way: 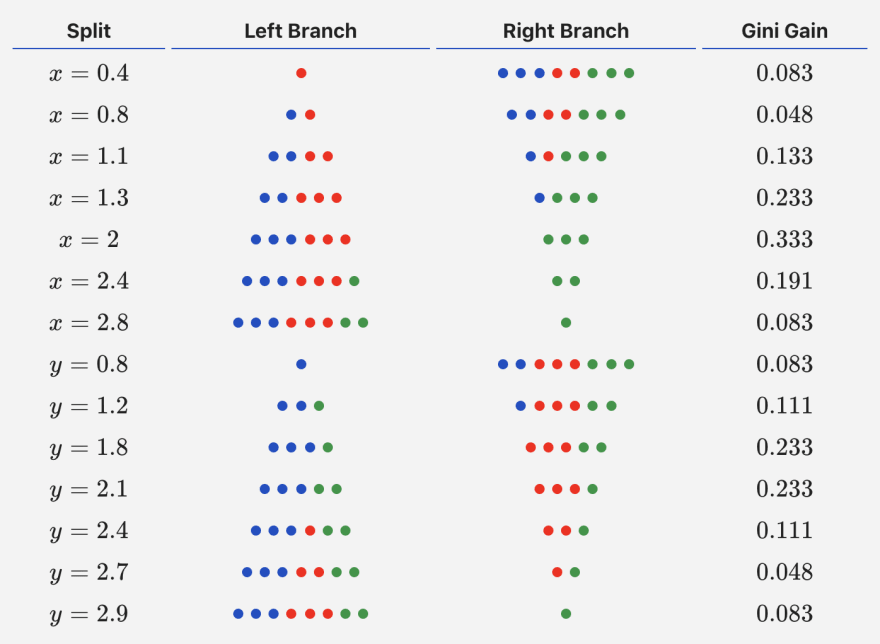 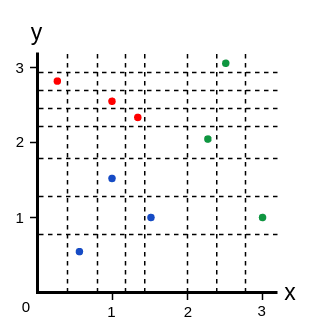 After trying all thresholds for both x and y, we’ve found that the x=2 split has the highest Gini Gain, so we’ll make our root decision node use the x feature with a threshold of 2. Here’s what we’ve got so far: 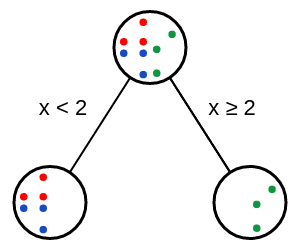 To build our second decision node, we just do the same thing! We try every possible split for the 6 datapoints we have and realize that y=2 is the best split. We make that into a decision node and now have this: 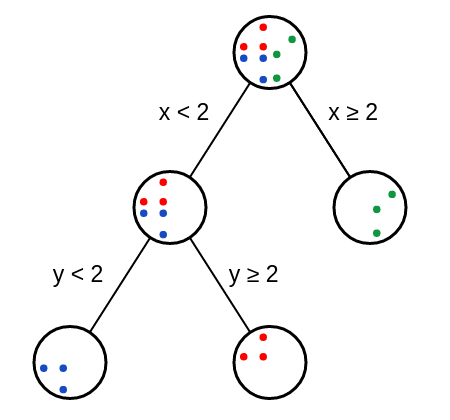 Our decision tree is almost done…

2.3 Training a Decision Tree: When to Stop?

Let’s keep it going and try to make a third decision node. We’ll use the right branch from the root node this time. The only datapoints in that branch are the 3 greens.

Again, we try all the possible splits, but they all

It doesn’t makes sense to add a decision node here because doing so wouldn’t improve our decision tree. Thus, we’ll make this node a leaf node and slap the Green label on it. This means that we’ll classify any datapoint that reaches this node as Green.

Once all possible branches in our decision tree end in leaf nodes, we’re done. We’ve trained a decision tree!

We’re finally ready to talk about Random Forests. Remember what I said earlier?

A Random Forest is actually just a bunch of Decision Trees bundled together.

That’s true, but is a bit of a simplification.

Consider the following algorithm to train a bundle of decision trees given a dataset of n points:

To make a prediction using this model with t trees, we aggregate the predictions from the individual decision trees and either

This technique is called bagging , or bootstrap aggregating. The sampling with replacement we did is known as a bootstrap sample. 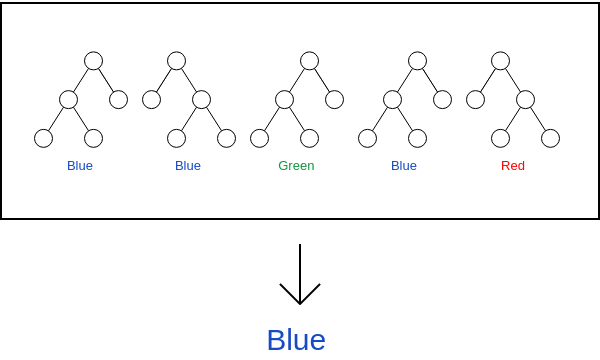 Bagged decision trees have only one parameter: t, the number of trees.

Random Forests have a second parameter that controls how many features to try when finding the best split. Our simple dataset for this tutorial only had 2 features (x and y), but most datasets will have far more (hundreds or thousands).

Suppose we had a dataset with p features. Instead of trying all features every time we make a new decision node, we only try a subset of the features. We do this primarily to inject randomness that makes individual trees more unique and reduces correlation between trees , which improves the forest’s performance overall. This technique is sometimes referred to as feature bagging.

That’s a beginner’s introduction to Random Forests! A quick recap of what we did:

A few things you could do from here:

That concludes this tutorial. I like writing about Machine Learning (but also other topics), so subscribe if you want to get notified about new posts.

Once suspended, vzhou842 will not be able to comment or publish posts until their suspension is removed.

Once unsuspended, vzhou842 will be able to comment and publish posts again.

Once unpublished, all posts by vzhou842 will become hidden and only accessible to themselves.

If vzhou842 is not suspended, they can still re-publish their posts from their dashboard.

Once unpublished, this post will become invisible to the public and only accessible to Victor Zhou.

Thanks for keeping DEV Community 👩‍💻👨‍💻 safe. Here is what you can do to flag vzhou842:

Unflagging vzhou842 will restore default visibility to their posts.