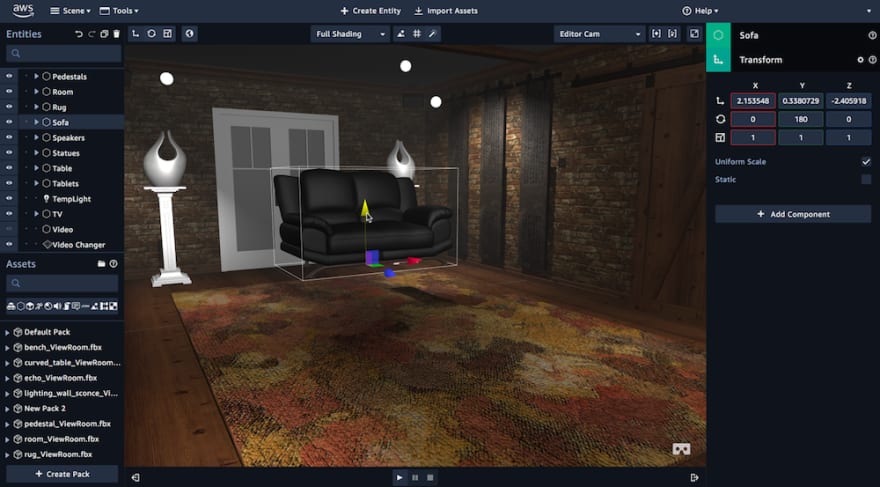 What is AWS Sumerian?

As we've seen the introduction of Apple's ARKit, and the somewhat recent release of Google's ARCore, we're getting to see a whole new generation of apps that incorporate Augmented Reality into its stack of features.

Amazon couldn't help but join the race by providing a different way in which to allow developers to create an AR environment. While in its present state developers have to create scenes into their respective applications (be it with ARKit, or ARCore), AWS has provided us with a separate option of publishing, and loading our scenes directly from the internet.

This means that as long as you're willing to compromise and have your AR experience be dependent on having an internet connection (which may be a fairly big barrier to some), you can develop a single AR scene that can be quickly incorporated into native ARKit and ARCore applications.

In this series of articles we'll be viewing how to get started with an AR Application, then we'll look at how to add your own custom Entities to your scenes, and add a layer of interactivity to them utilizing state managements and AWS Sumerian's scripts.

To begin, head over to your AWS Console, and under the VR & AR section, you'll want to click on Amazon Sumerian. This will prompt a new tab to launch and you should be sent over to your Dashboard, now we're ready to begin! 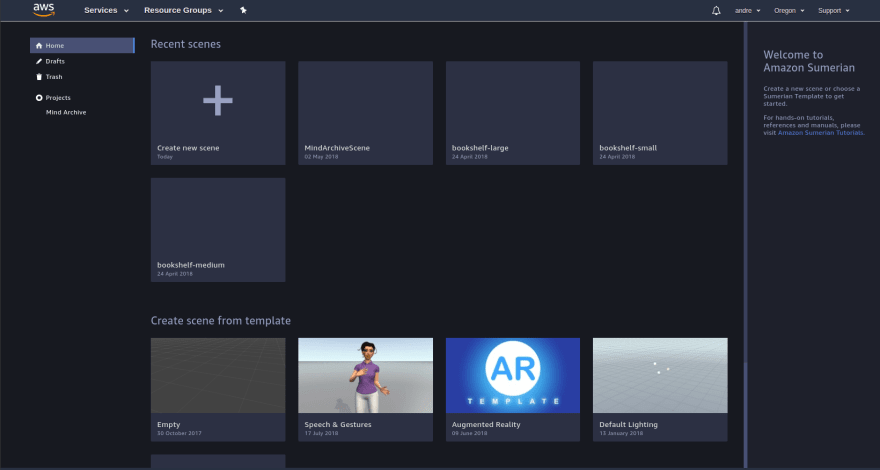 Now that we're ready, notice how your screen is divided into 3 main sections. To your left you have your navigation menu, where you're able to create new projects to manage them under, in the center you'll notice a big Create New Scene button, but let's not click on that one yet! And on the right section you have a sidebar that will throw you information about whatever you selected in the other sections

What we want to start with, is to create a new project where we'll be handling all scenes and entities in our tutorial series. We'll do that by:

IMPORTANT: In order to be able to import a 3D asset into your AR Scene, they will need to be a part of the same project

Now that we have a project set up, we'll be wanting to create the following scenes:

If everything goes as expected, we'll now be sent to the editor screen with an empty scene.

In Sumerian's current version, you can't add a scene to a project at the moment it's created. To do that you'll have to do the following:

phew!
Now for the last part of setting our project up for AR!

If you've completed all the things described above you should have:

You may now proceed to the second part of this tutorial, where we'll go over how to create 3D entities and programatically add them into AR scenes using AWS Sumerian's scripts.

Once suspended, wandererstudio will not be able to comment or publish posts until their suspension is removed.

Once unsuspended, wandererstudio will be able to comment and publish posts again.

Once unpublished, all posts by wandererstudio will become hidden and only accessible to themselves.

If wandererstudio is not suspended, they can still re-publish their posts from their dashboard.

Once unpublished, this post will become invisible to the public and only accessible to Andre Vasconcelos.

Thanks for keeping DEV Community safe. Here is what you can do to flag wandererstudio:

Unflagging wandererstudio will restore default visibility to their posts.