Internet Explorer 11 accounts for less than one percent of total Internet usage globally and less than half a percent in the United States. Even Microsoft's own web apps have stopped supporting it. But on the off chance someone does use Internet Explorer, what do you want them to see? This article explains how to employ the concept of progressive enhancement to provide a moderately acceptable experience to users of a decaying platform without taking on all of the legacy burden of formally targeting it.

The need for Internet Explorer 11 support

As unfortunate as it is, Internet Explorer still fulfills its own cursed little niche in the browser market in enterprise software because it still provides the best support for Active Directory authentication. That means there are still many office environments which are still writing new, greenfield web apps which support Internet Explorer exclusively. If you're applying for jobs in enterprise, your future hiring manager may well use Internet Explorer as their default browser because it's the only way for them to access their timesheet.

With that in mind, let's open my own website in Internet Explorer and see what it looks like from that perspective. 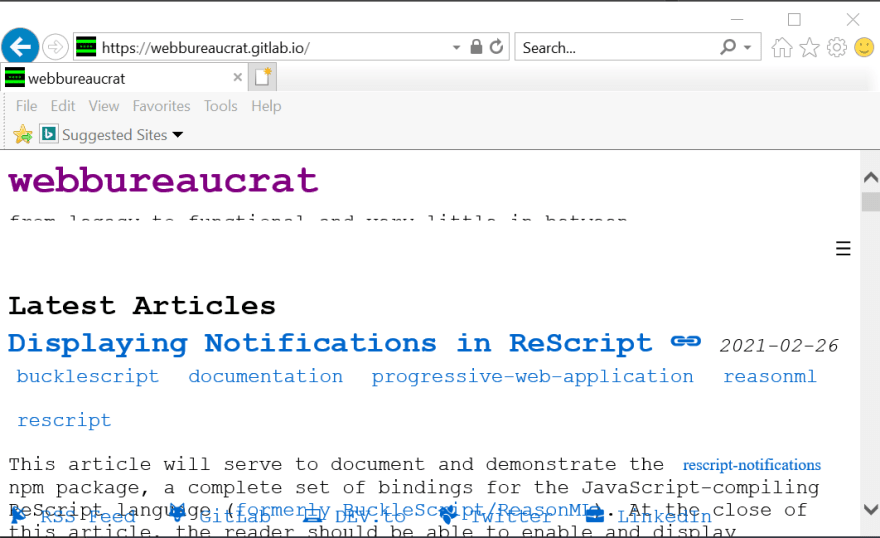 Welp. That's problematic. It looks like a website written by someone who hasn't yet learned what CSS even is. Of the handful of styles Internet Explorer is able to apply, many of them weren't even applied correctly, leaving cutoff text.

Clearly, if I were going to target Internet Explorer, I'd have to almost completely rewrite all my stylesheets, but I don't necessarily want that. Ideally, here's how I'd like things to work out:

Progressive enhancement is a Third Way for legacy support in which a developer neither targets a platform nor ignores it. Rather, a developer supports a platform with some minimal features while providing a progressively better experience on targeted, modern platforms.

I recommend bringing a project to a stable version before backfilling code to work on Internet Explorer for two reason:

Right now my website largely looks how I want it to look on modern browsers. I expect there to be some small changes here and there, but I believe the largest changes to the style of the site are behind me for the forseeable future, so I believe my website is a good candidate to begin backfilling Internet Explorer support.

Internet Explorer's weaknesses and how to use them to our advantage

Primarily, the problems of my website on Internet Explorer come down to two issues:

The second thing is just annoying, but the first is something we can definitely use to our advantage. It means we can use plain CSS to style things for IE but override them with CSS variables for modern platforms that do support them.

I'm going to tackle the CSS variables first because it's by far the most noticeable issue on my site in Internet Explorer. Since Internet Explorer does not support CSS variables, I'm going to have to manually go through my style sheet and fill in the hard values in the line before the line that uses the variable, so that the hard value will be overwritten by the variable in browsers that support variables.

You might be wondering why I'm bothering to keep my CSS variables at all if I have to chase each of them with hardcoded values. After all, if I change the value stored in the variable, I'm now going to have to change each hardcoded value.

But recall that targeting IE is not a main goal of my website--I'm just providing some minimal secondary support. Yes, ideally, if I ever decide to change the value of --color-theme-highlight, I should also go in and change the hardcoded values, but it's not a big deal if one or two of them get missed for some period of time.

As counterintuitive as it is, then, I am keeping both the hardcoded values and the variables because it gives me the maintainability and readability of variables while providing some minimal support to IE users.

Hiding the things that just don't work in Internet Explorer

Most of my other issues come down to my love of flexboxes--and I'm not just going to give them up. Instead, for my use case, I'm just going to strip out the parts of my site that Internet Explorer doesn't display properly.

We can use CSS variables as a crude feature detection, like so:

This hides the website footer with display: none; but then overrides it with a CSS variable for browsers that support CSS variables. This is a little hacky, but that's okay because if it breaks, we only inconvenience the very few users who use Internet Explorer.

But of course, at the end of the day, our favorite solution would be for our Internet Explorer users to switch. Let's work on encouraging them to do so.

Displaying a message encouraging users to upgrade their browser

There are no surprises here. I'm just reusing the CSS variable hack again so that my ugly orange warning message displays only for browsers that don't support CSS variables.

Now I can just add a warning at the top of the page container like:

At this point, with minimal effort and no structural changes, my site is acceptable to look at in Internet Explorer, and my Internet Explorer users now know how to reach a better user experience. I'll probably continue to make a few incremental improvements, but for now I am quite happy with this compromise, and I hope that this article has given you a few ideas for how to apply the theory of progressive enhancement to make peace with the legacy users on your platform of choice.

12 Ways To Reduce Carbon Footprints as a Full Stack Developer