Why Running yarn upgrade Does Not Update My package.json

Today I wanted to upgrade the dependency of React of one of my projects. So I ran

And it seems everyone was happy.

Then I checked my package.json, nothing changed.

My first Google enquiry was yarn upgrade does not update package.json. A few results seemed to be indicating bug in earlier versions of Yarn. But it didn't seem to be going anywhere.

I then checked my yarn.lock and realized that the latest versions of my upgrading packages are already installed.

I had a rough understanding of what might have happened here. The current react@^16.5.1 accepts the upgraded version 16.8.6, as indicated by yarn.lock.

I mean, other than manually changing package.json?

I played around a few things to do. Some apparently not the right direction, but they helped to gain some understanding of the situation.

The installed version in our node_modules might not be the literal number we see in our package.json. This is because the versions we indicate can be a range.

For example, the caret ranges are specified as follows:

This will install the package with its latest stable version, and Yarn writes our package.json of that version with the caret range.

If I understand this correctly, it seems that if I run yarn my package in the future, or if some other package depends on a later version, it will use the later version as long as it satisfies the range.

There are more ranges in semantic versioning:

So what I learned today is that running yarn upgrade does not necessarily update package.json as I imagined it would.

Running yarn upgrade without any modifiers does not update package.json.

If we run yarn upgrade without any flags, it will install the latest version that matches the version pattern indicated by package.json. And it will not update package.json.

But it still might not update package.json. And specifically, when the latest version matches the semantic version range indicated in package.json.

What should I do if I want to upgrade to a version and update package.json

If dealing with a library where even minor versions are sensitive, it is better to indicate a stricter version range, even an exact one. And upgrade with --latest.

Other than that, after playing around with a few commands, I find this command interesting and the most straightforward in this situation:

This will pull up an interactive list of versions for you to select. And after installation, it will update package.json to the selected version with a caret range again. 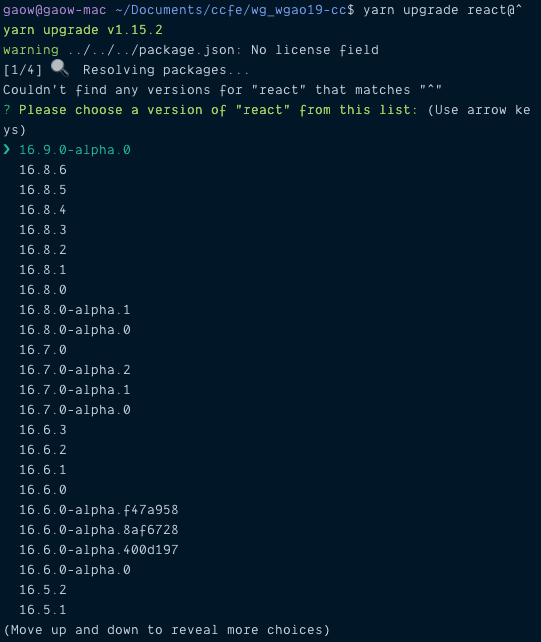 For version sensitive libraries (such as Flow??? 🙈), indicate the version dependency without any ranges.

Use yarn upgrade package@[version] is perhaps the most intuitive way of the actual action of upgrading packages.

Top 5 Linux Distributions to use as Your Virtual Machine

Once unpublished, this post will become invisible to the public and only accessible to Wei Gao.

Thanks for keeping DEV Community 👩‍💻👨‍💻 safe. Here is what you can do to flag wgao19:

Unflagging wgao19 will restore default visibility to their posts.