In this article, we will see how we can create browser-ready real-time video/audio processing apps with Streamlit.

Streamlit is a Python framework with which developers can quickly build web apps without frontend coding. On top of it, developers can make real-time video/audio processing apps that receive video/audio streams from users’ media devices, only with ~10 lines of code in the case of the simplest example.

Since such apps are web-based, they can be deployed to the cloud, shared with users easily, and have modern and user-friendly UIs.

You can see more examples at the examples section

NOTE: These sample apps are hosted on the public cloud (Streamlit Cloud), and the video and audio streams are transmitted to and processed at the cloud server. While those data are only processed on memory and not saved to any storage, however, if you are concerned, please do not use them. As for the following contents in this article, we can execute all of them on our local. In addition, you can try the examples above on your local by following the instructions at the examples section.

The advantages of web-based apps

We have been typically using OpenCV to build real-time demo apps of image or video processing. Some of you (especially developers or researchers in such fields) may have seen the following code or similar many times.

Compared to the GUI apps like above using cv2.VideoCapture and cv2.imshow that run on local environments, web-based apps have some advantages like below.

We will create a simple web-based real-time video processing app with ~10 or 20 LoC. Please try this tutorial in an environment where a webcam and a microphone are available.

You can check the final result of this tutorial in this repository. The deployed online demo is here🎈

In this tutorial, we will write code in app.py. Please create an empty app.py at first.

Next, we have to install the packages necessary for this tutorial.

NOTE: Please skip this section if you have experience in Streamlit.

First of all, launch the Streamlit with the command below. Please run the command in the same directory to the app.py.

After a while, the Streamlit server process will boot up. Then access http://localhost:8501 to see the page like below (or it will automatically open in the browser by default). The screenshot here is in dark-mode, and if you are using light-mode, it looks different.

At this moment, there is no content on the web page because app.py is empty. We will add lines of code in the app.py for the Streamlit app. 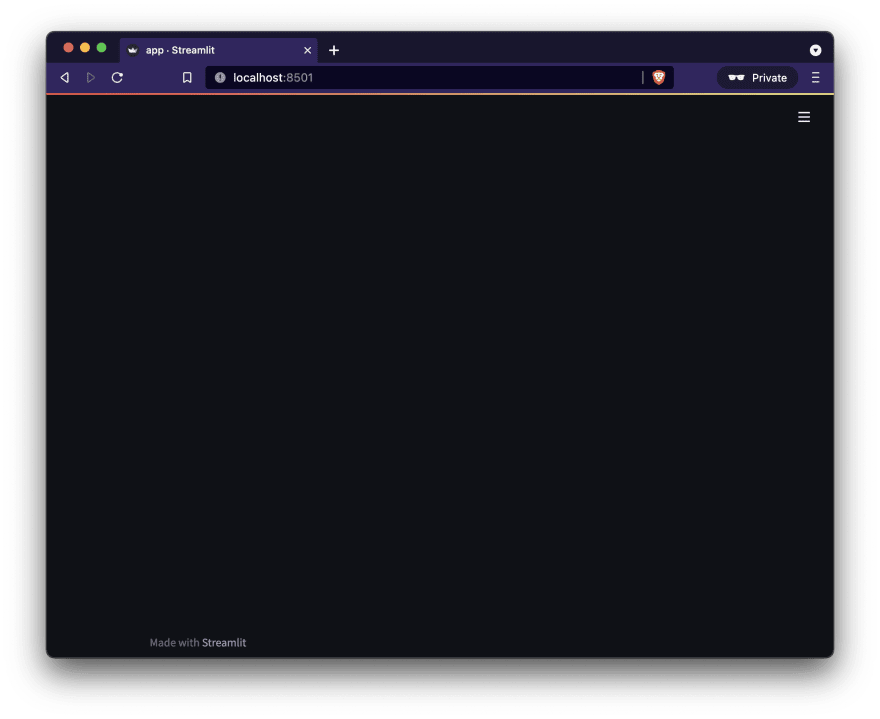 Open the app.py with your editor and write the code below.

When you save the file, Streamlit will detect the file change and shows the “Rerun” and “Always rerun” buttons on the top right of the screen. 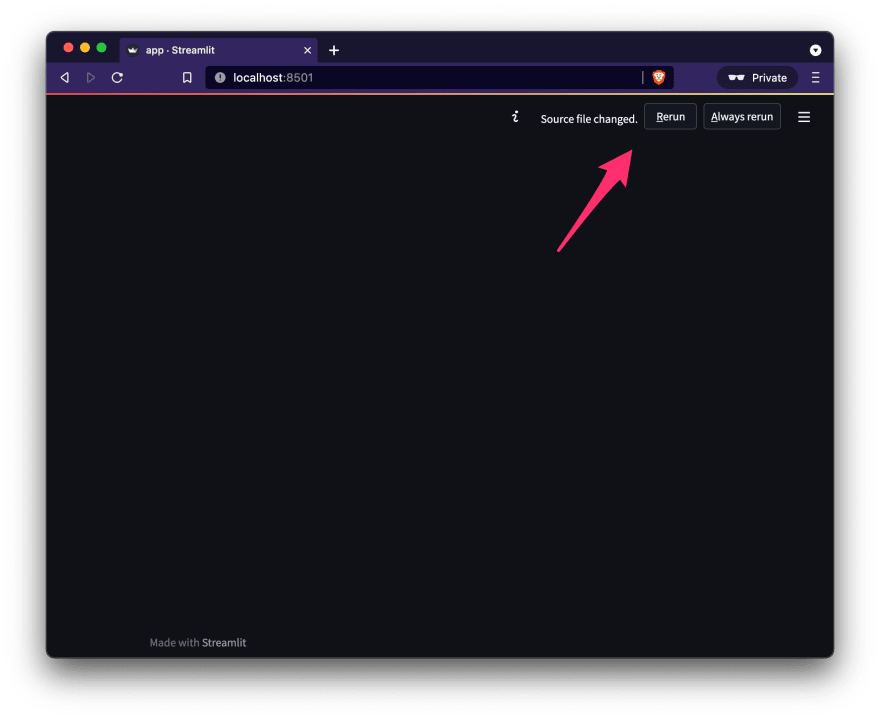 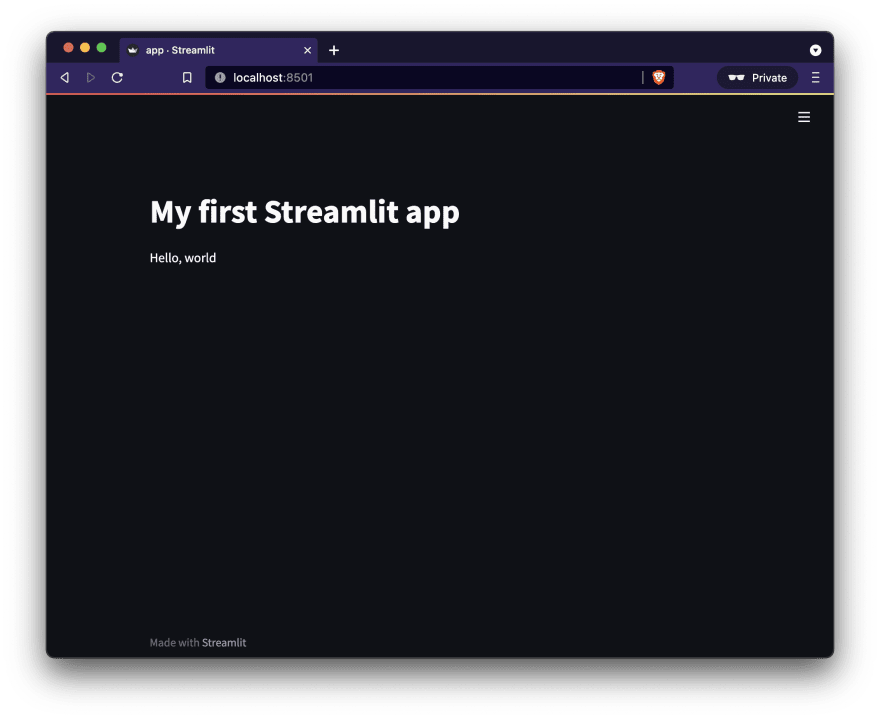 If you had clicked the “Always rerun” button, the page would automatically be reloaded every time the file changed.

Note that you have to reload the page like above in the following instructions where you update the app.py.

Now we have walked through the basic development flow of Streamlit apps. You write Python code with Streamlit components like st.title() and st.write() and pass it to the streamlit run command, then Streamlit generates the corresponding frontend contents on the web page.

In the next section, we will see how to develop a real-time video processing app on top of Streamlit. Apart from that, Streamlit itself covers more use cases such as machine learning, data science, or more general purposes. For such use cases, please see the official Streamlit tutorial for example.

Update the app.py as below.

We have added a single line with webrtc_streamer(). The web app would be like the screenshot below. 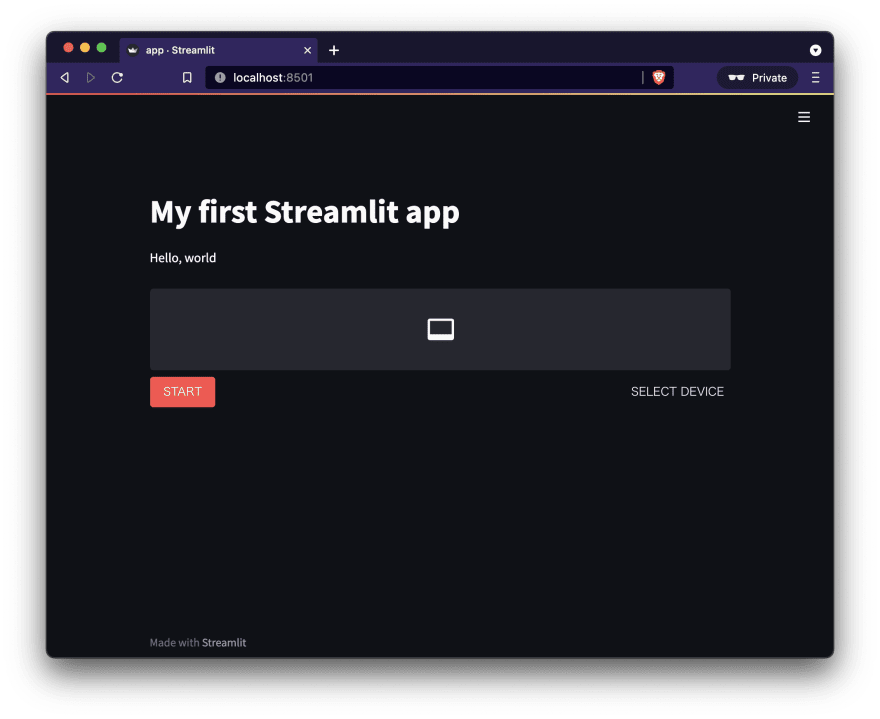 At the first trial, it may take some time to compile the package so that the page keeps showing the “running” message for a while after clicking the “Rerun” button. In such a case, wait for the process to finish.

Click the “START” button to start the video and audio streaming. You may be asked for permission to access the webcam and microphone at the first trial. Grant permission in that case.

The webrtc_streamer(key="example") above is a Streamlit component which deals with video and audio real-time I/O through web browsers. The key argument is a unique ID in the script to identify the component instance. We have set it as "example" here, but you can use any string for it. The component in this example only receives video and audio from the client-side webcam and microphone and outputs the raw streams. It’s the most basic version of the component. We are going to enhance its functionality by adding other options in the following sections.

Update the app.py as follows.

Try it out by clicking the “START” button like the previous section. With this new example, you can find that an image filter is applied to the video stream.

We have defined a class and its method VideoProcessor#recv(), a callback that receives an input frame and returns an output frame. We also put image processing (edge detection in this example) code inside the callback. As a result, we have injected the image processing code into the real-time video app through the callback.

Now, we have created a browser-ready real-time video processing app! We used a simple Canny edge detector in this example, and you can replace it with any image processing code in your original app.

If we use object detection or style transfer for that part, the app would be like the screenshots at the beginning of this article4.

Update the app.py as below.

Then click the “START” button. You will find that there are 2 sliders in this example. You can modify the parameters of cv2.Canny() through the sliders, even during execution in real time.

Execution model of recv() and an important notice about it

Unlike OpenCV, streamlit-webrtc requires callbacks to process image and audio frames. The callback .recv() is one major difference between OpenCV GUI and streamlit-webrtc, and there are a few things you have to be aware of about it.

Please note that .recv() is executed in a forked thread different from the main thread where the Streamlit app code runs. It makes some restrictions as below.

In the previous example, we passed values from the global scope to .recv() since we cannot use global and refer to these values from inside .recv().

Deploy the app to the cloud

We are going to make the web app available to everyone by deploying it to the cloud.

To deploy the app to the cloud, we have to add rtc_configuration parameter to the webrtc_streamer().

This configuration is necessary to establish the media streaming connection when the server is on a remote host.

streamlit_webrtc uses WebRTC for its video and audio streaming. It has to access a “STUN server” in the global network for the remote peers (precisely, peers over the NATs) to establish WebRTC connections. As we don’t see the details about STUN servers in this article, please google it if interested with keywords such as STUN, TURN, or NAT traversal.

We configured the code to use a free STUN server provided by Google in the example above. You can also use any other available STUN servers5.

The value of the rtc_configuration argument will be passed to the RTCPeerConnection constructor on the frontend.

We have to serve web apps on remote hosts via HTTPS to use webcams or microphones.

Not only the webrtc_streamer() component we used here but also any frontend apps that access the client-side webcams or microphones use MediaDevices.getUserMedia() API. This API does not work in an “insecure context.”

A secure context is, in short, a page loaded using HTTPS or the file:/// URL scheme, or a page loaded from localhost.MediaDevices.getUserMedia() - Privacy and security

As a result, we need HTTPS to serve web apps on remote hosts which access the client-side webcams or microphones.

Please refer to the official document for its usage.

I actually deployed the app we have seen in this article on Streamlit Cloud: https://share.streamlit.io/whitphx/streamlit-webrtc-article-tutorial-sample/main/app.py .

Its GitHub repository is https://github.com/whitphx/streamlit-webrtc-article-tutorial-sample .

As written above, the video and audio streams sourced from the client devices are transmitted to and processed at the server.

So, this library is not scalable and depends on network connectivity. You may think of it mainly for prototyping or demo purpose.

You also have to consider hosting the apps in local networks if there are concerns about transmitting media to the remote cloud server.

This section is a copy of the sample list at https://github.com/whitphx/streamlit-webrtc.

Showcase including following examples and more

You can try out this sample app using the following commands on your local env.

It converts your voice into text in real time. This app is self-contained; it does not depend on any external API.

It applies a wide variety of style transfer filters to real-time video streams.

You can create video chat apps with ~100 lines of Python code.

MediaPipe is used for pose estimation.

You can deal with audio streams in a similar way as video. If you define a class with .recv() method and pass it to the audio_processor_factory argument, the callback will be executed with audio frames. In the case of audio, the input argument and the returned value of the callback are instances of the AudioFrame class.

Please see the source code of a sample app changing the audio gain or the Speech-to-Text app in the examples above.