I may have mentioned that I have an executive function disorder. That is the category AD(H)D falls into. What that means for me is that it is often a lot of work for me to make decisions and organize tasks. All of the traits that make me an excellent systems thinker, like holistic views, consideration of concepts outside the standard solution, and interrelationships are present all the time.

Most people, when they go to book a hotel room, get on a site like Travelocity that triages by price and distance, and they just pick something. What I do is do that, and then think about how much it would take to get Lyft to and from where I need to be and if that’s a savings worth staying further away, and is there anything else I need to visit while I’m there, and is it in my 3 loyalty networks, and does it have late-night room service, and is it close to someplace that I can get groceries, and does it have a fridge, or a microwave? Is it in the loose budget my company asks for? Is there a reason that it’s more expensive, such as holidays or major events? How does that compare to the per diem for federal employees, which is what I use as my heuristic for judging which cities are just annoyingly expensive?

I think all those things pretty much every time. And I think in that scope for almost everything. I used to think that loyalty programs like airline mile memberships and hotel points were for a) optimizers b) rich people c) frequent travelers. I’m really only a member of c), but it turns out that they’re also great for d) people who need to reduce computational complexity.

I went to 44 events this year, I think (accurate year-end roundup later). Are you exhausted thinking about that level of planning? I was. And then I was facing down 3 weeks in Europe and I complained to my boss and he told me that a personal assistant was an allowable business expense.

I’m working with a lovely woman named Carly, from an organization called Aim2Assist, and it is making my life so much better. Suddenly, I understand why executives get executive assistants and why it matters to their productivity. Because I can delegate.

Yes, I have signed over a great deal of personal information to this person. There’s no way around it. The way I did it was to share LastPass entries for all my frequent flyer/hotel/credit card information. I can revoke those at any time, and keep them updated. This is much easier with a company credit card, because the company has the ability to get recourse if something goes wrong (which I don’t suspect will happen, but they have more money than I do).

Then I gave her a rough set of parameters to work with. I prefer to fly Delta. Window seats. No AirB&B if we can help it. Hotel rooms in the $150-$250 range if possible. I’ll take care of my own transportation on-site. We also did a chat where I talked about things I just liked in general, and what it means when I travel for work. (14 hours days a norm)

So, for the Europe trip, I booked my inbound and outbound flights, and then sent Carly that information and the dates of the conferences and meetings in London, Bordeaux, and Marseille. Those were my fixed points. I told her that I wanted to spend some time in Bath (which was magical), and that I preferred the train to flying in Europe. She sent back an itinerary for my approval. For all my London stays, I was in one hotel, which was nice and consistent and I just had to learn one route to and from the Tube. Because I wanted to do walking in Bath, she booked me a hotel in the historic parts that was lovely and gracious and still less expensive than staying in London. In Bordeaux, she found this ridiculously lovely off-season glamping/chateau experience. 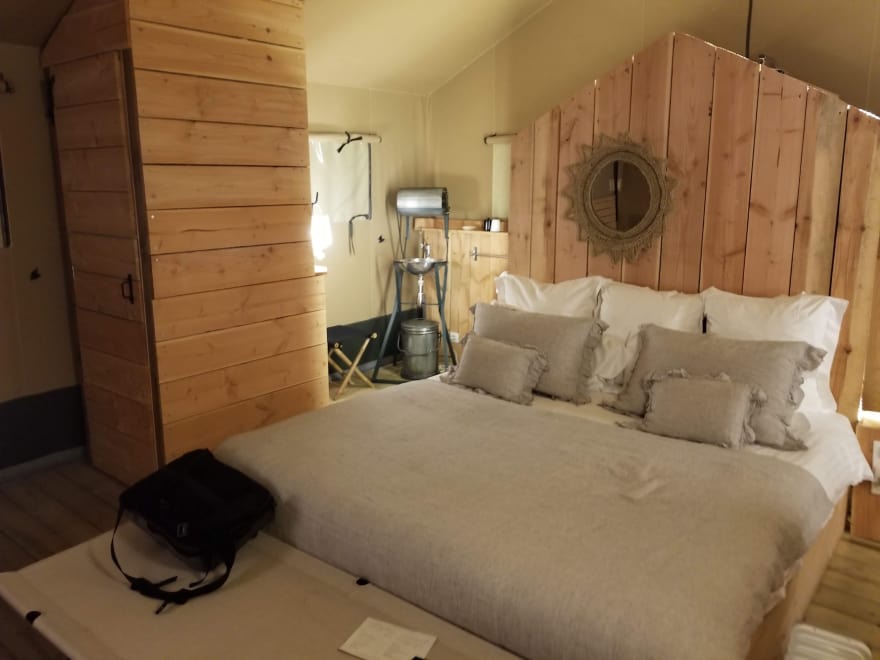 It was in Bordeaux that I was desperately grateful to have her. I had gotten pickpocketed in the half hour I spent in the Paris Metro, so I only had my backup card, which was an American Express. It’s not the card of preference in Europe, if you were wondering. Instead of me trying to argue with taxi drivers about what kind of payment they’d take, she booked me a car and driver. And when the train I was booked on told her that they weren’t going to stop in Marseille due to flooding, she rebooked me onto a flight so I would get there in time.

When I got home and there were all the usual annoyances of travel, like my hotel nights were not properly credited and I needed a refund for the cancelled train ticket, I could hand those off to her instead of trying to deal with it myself.

None of this was impossible for me to do. She’s not a travel agent with access to their mystical systems. She’s a human who gets paid to make things happen for me, another human. And it’s such a blessing to me. Her decision matrix is much smaller than mine. I’ve told her my preferences, she optimizes for them, but she doesn’t end up deep in the weeds of what’s professional and what’s self-indulgence. I don’t want to walk more than half a mile to get to a conference venue, she accounts for that and doesn’t wonder if it’s worth an extra $20/night to save 10 minutes, etc etc.

NOTE: if you are a frequent traveler and no one has given you a company credit card, raise hell. If you WANT to put it all on your personal miles card, that’s fine, but you are traveling for company business, and they are going to pay eventually, so make sure they pay now. This is especially true for people who are young, have low credit limits, or have shitty credit. I can drop 10k on a month of travel bookings, easily. I do not have a personal credit card with a 10k limit, nor do I want one. Companies should not make private wealth a prerequisite to career advancement.

What can you ask for?

LaunchDarkly is paying for this service, because it’s cheaper to pay her rate than to pay my “rate” for me to do this, only less well. Those hours I don’t spend on travel booking I spend on watching conference talks or reading articles or writing blog posts. It’s better value for money.

Because my employer is doing this, I try to keep my requests to work-related things, mostly travel. I would also feel ok asking Carly to file my expenses (if our system wasn’t so stupid-easy), or send confirmations or other things that related to traveling and speaking.

If I were paying her myself, I could also ask her to book medical appointments, send birthday presents, order flowers, get someone in to clean up my lawn. We have apps for a lot of this now, but it still takes time and effort to do, and time and effort is exactly what I don’t have to spare right now.

If you ever watched The West Wing and admired Mrs. Landingham as a highly-competent person who enables Jed Bartlett to be Bartlett, that’s like the highest expression of getting help to delegate executive function to. Few of us can have a secretary, but many of us could possibly spend a day’s wages to save that time and thought for something else.

I think the scariest thing for most of us is having our identity stolen. Going through a proper organization is going to buffer against that. I wouldn’t hire someone random off Craigslist to do that, even though they’d probably be fine. I like having someone who is accountable. Also, let’s be real, our identity is scattered across a dozen databases on the dark web already.

What if your assistant screws up? Well, so far my assistant’s track record of screwing up is far below my own record. I am the queen of being really bad at booking flights that cross midnight and realizing belatedly I’ll arrive on the wrong day. Inevitably it will happen, but when it does, I’ll have someone to help me figure that shit out.

Yes, it’s totally worth the money to get an assistant if you have a life like mine. I was feeling guilty about being “lazy” when I felt overwhelmed about booking my own travel, until a friend pointed out that for me, it’s an accommodation, and for everyone, it’s an efficiency.

It is a build vs. buy proposition.

I could work hard to make this work in my own system, or I could pay money and save opportunity cost to get a better end product.

Why Boot.dev is Not Completely Free