One of the skills that I’ve been learning in this new Developer Advocate position is the letter of introduction, which is a close relative of the sales version (the warm handoff) and the recruiting version (letter of reference), but isn’t exactly like either of them. 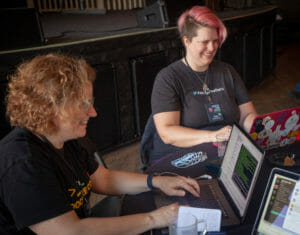 I think “Letter of Introduction” is actually a little unclear, because historically, it was a letter someone took to introduce themselves to a person where they were going. For example, Newton could have written Liebniz about a promising mathematics student, and then the student would have taken the letter from Newton to Liebniz when they traveled to Germany. Liebniz would have read the letter and had some context for who this person was and whether they might be useful.

But we don’t send people on months-long intercontinental trips as much anymore, and even if we did, we have email now. Now what would happen is Newton would think “what a promising mathemetician”, and say, “Hey, student, would you like an introduction to Liebniz? I’ll see if I can set that up”. If the student replied in the affirmative (omg!!!), then Newton would email Liebniz and say “Hey, I’ve got someone who may work out for you, do you mind if I do an introduction?”

This double opt-in is really, really, super important. It is so rude to force contact between two people, especially if there is any expectation of any kind of work or obligation or emotional labor involved. Also, just because you have someone’s contact information doesn’t mean you’re entitled to distribute it willy-nilly.

How does this come up in developer relations? A huge part of my job is fostering connections, not just from our internal developers and the people who use our developer tool, but things like “I know both of these people, and they would mutually enjoy/benefit from being able to talk about testing, or statistical significance, or edge cases of Python+Data.” I could tell you this is important because it builds social capital, or because network connections are vital, and those are true reasons, but also I am going to do it because these are humans I have talked to and gotten to know and because I can help them. That is enough of a reason.

I usually write these letters in one email, addressed to both parties, with everyone’s email showing, because I’ve already gotten permission to connect these people.

Connection reminder: Last week, you and I were talking about providing ethical training for your school for exceptional students. You told me that you were having trouble finding someone who could really connect with your students.

Purpose : I’d like to introduce you to Phineas & Ferb, a pair of people with a solid ethical foundation and an engaging teaching style. They might be good applicants for your empty instructor position.

Encomium: Phineas & Ferb have industry experience with supergeniuses, and a joyful and happy attitude toward learning. Their ethics guidance has helped change the behavior of several people, including a former “bully”, Buford, who has modified his behavior to be more thoughtful.

Purpose 2: I hope this introduction helps you in your search for an ethics instructor.

Identify connection: When we were talking about business opportunities yesterday, I thought of my old frenemy, Professor X. Although he and I are on the opposite side of many issues, we agree that ethical behavior is essential for exceptional students.

Leading ideas/purpose: I know your ethics curriculum is fully developed now, and you’ve been looking for a place to conduct testing. Professor X’s facilities, students, and goals all seem well-aligned with yours.

Encomium: Professor X is an industry leader in appearances claiming to do the correct thing, and has my personal admiration for his work with youth in need.

Next steps: I hope this connection is useful to both of you. Please don’t hesitate to ask me if you have any further questions.

Find and Count files on AWS S3 by size

Are you starting with microservices? Forget the DRY principle and embrace redundancy!