That’s a joke. I have made $65 off 4 years of live-tweeting, and it’s more than I ever expected. As far as fame, the point is not for me to get famous, but to promote some amazing speakers as they do their thing.

I don’t know about you, but I have about 20 tabs open in my browser with technical talks that I’m excited about seeing and will get around to anytime now. As soon as I have 45 minutes that I’m not doing something else. Don’t @ me.

It is hard to make space in our lives to consume technical talks. It is much easier to consume a tweetstream that summarizes the key points of the talk.

So what is it that makes live-tweeting successful, and what are some things to avoid?

I use an iPad as my main conference-going computer. It’s powerful enough to write on, remarkably unfussy about connecting to a conference wifi, and small and cheap enough that losing it will not be catastrophic. I also present from my iPad, but that’s a different story.

I’ve paired that with a bluetooth keyboard that I bought with some of my donations. I like the combination because I can set it in my lap or use in in a number of weird orientations. I’m a pretty fast touch-typist, so I can take notes quickly enough that I can capture most main points.

I have a wifi hotspot that I keep in my go bag. I’ve had very few problems at conferences in the last year or two, but before that, there was a pretty good chance that a technology conference would overwhelm whatever wifi infrastructure the venue had set up.

My final hardware investment is an iPad case that allows me to prop it in several different configurations, including horizontal and vertical. I always choose the ones in screaming pink/fuschia/etc, because I’m pretty sure that “girly” looking technology is less likely to be “accidentally” picked up by someone else. Also, it’s very on-brand! 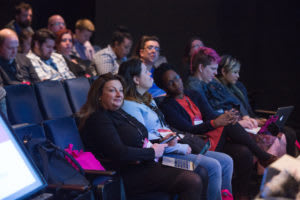 That’s me, in the pink hair, live-tweeting from The Lead Developer New York 2017. You can see the keyboard and iPad balanced in my lap. (It’s a great conference!)

I am an enormous fan of NoterLive by Kevin Marks. I met him at Nodevember in 2016, I think, and he has created an amazing tool for live-tweeting. 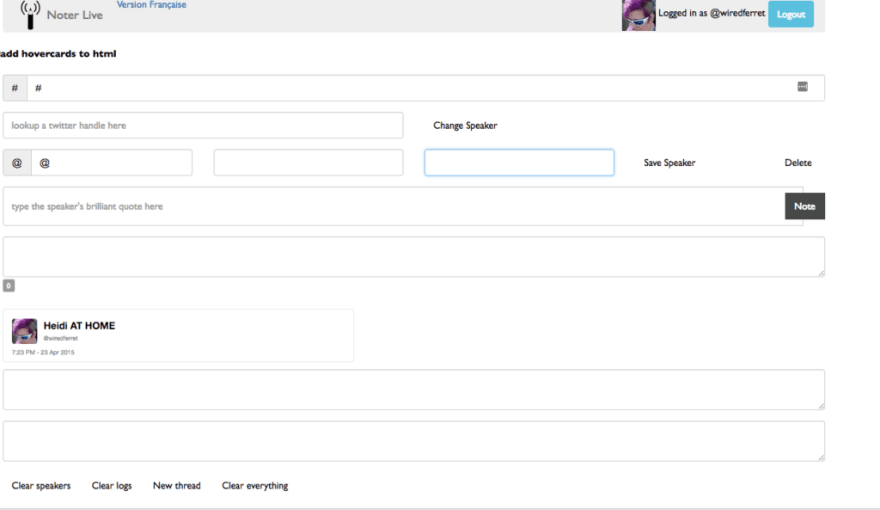 Pretty much all I have to do is set the conference hashtag by the day, start a new thread, set the speaker, and then I can type without worrying about it and the tweet is sent every time I hit enter.

It’s aware of character limits and will give you notice when you’re approaching it. The only thing that’s a tiny bit hinky, and I still don’t know if it’s happening, is that it will sometimes attempt to make a link if I have some combination of a period and spaces. It doesn’t send the link, but it throws the character count off.

I use TweetBot on my iPad to watch the conference hashtag and retweet things that are cool and relevant that I didn’t get noted or didn’t see. The new TweetBot for Mac just came out, and they finally have a dark theme and a much better way of handling and viewing lists.

I used Storify to compile all the tweets about my talks and weave a loose story about the experience, but it’s gone and I am very sad and I’ve not yet found a replacement.

This is actually just the set of rules I try to follow for myself. There isn’t really a journalistic code of ethics for tweeting.

There are some anti-patterns that I’d like you to try to avoid:

Add To Your Lists

@lizhenry – the OG livetweeter, the one I learned so much from. Good for Mozilla information, politics, and feminist poetry.

@cczona – the mind behind Consequences of an Insightful Algorithm AND @Callbackwomen. Excellent at pointing out connections between different threads of technical talks and the implications of them.

@lizthegrey – Google SRE, badass speaker in her own right, and excellent at documenting and commenting on lots of topics, especially resiliency.

@CateHstn – Thoughtful blogger and live-tweeter operating at the intersection of dev and management.

@bridgetkromhout – indefatigable DevOps organizer and excellent live-tweeter. She actually manages to take pictures and livetweets from her phone. I’m in awe, honestly.

@whereistanya – a systems thinker who managers to pull tweets and blog posts together and make you see a side of the talk that you might not have recognized.

@GeekManager – conference organizer and integrative thinking on the bleeding edge of the humane treatment of developers who end up managing.

@QuinnyPig – Not always a perfectly accurate rendition, but always funny (and clear) about the divergence

@mattstratton – brings an insider perspective to talks, which allows him to point out connections you may not have thought of.

@skimbrel – technical expertise from an unapologetically queer viewpoint. It’s not paranoia if they’re really out to get you.

Writing a Terminal Application in 2019

Tips to use VSCode more efficiently