Last week, I wrote about how the first six weeks at skwirl went. If you haven't read that blog yet you can read it here and if this is the first time you've heard of skwirl you can learn more here. This week, I'll give an overview of the backend.

Kevin pitched skwirl to me about 4 months ago. Before he even finished his pitch I already had some ideas in mind for the tech stack. I wanted to stick with what I already knew to reduce time to market. I also wanted to use bleeding edge tech that I was fairly confident is going to become mainstream in the future. Lastly, I wanted to pick technology that was popular and actively being developed/maintained. My thought process at that point:

So I searched around the internet with the terms ruby lambda, ruby serverless, rails lambda, rails serverless. Eventually I came across and settled on using Ruby on Jets. Jets is actively being developed by Tung from BoltsOps. From the Jets homepage:

Ruby on Jets allows you to create and deploy serverless services with ease, and to seamlessly glue AWS services together with the most beautiful dynamic language: Ruby. It includes everything you need to build an API and deploy it to AWS Lambda. Jets leverages the power of Ruby to make serverless joyful for everyone. 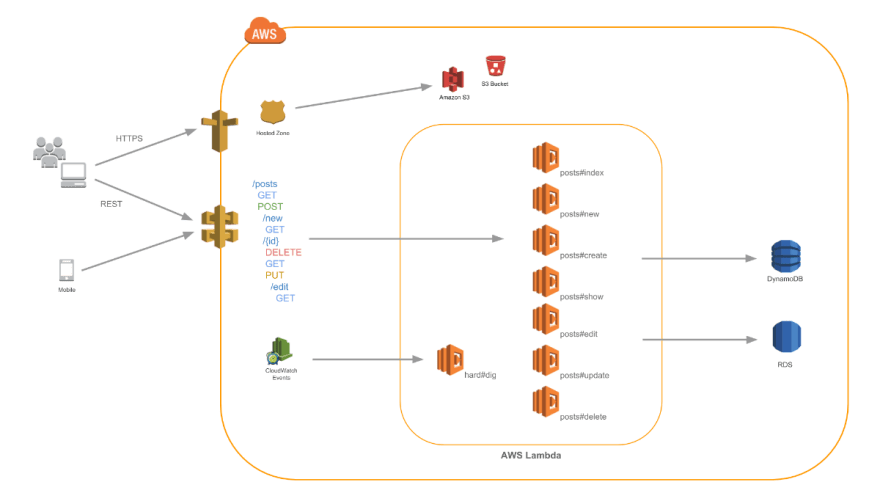 Our staging environment is configured with 512MB of memory. It's deployed in us-east-1 (North Virginia) and I'm in Vancouver, BC. Currently, the request with the longest response time is /login. After being warmed up (we have prewarming turned off in staging), it takes ~950ms. Keep in mind that an expensive hashing function was chosen intentionally. A more reasonable gauge of performance would be /listings. This returns the first 20 active listings created by the current authenticated user. The average response time is ~130ms. Shave off 70ms or so for the Vancouver to North Virginia round trip and we're looking at ~40ms compute/DB time. Not the best but certainly good enough for our use cases especially considering we've done no optimization. We'll likely increase the function memory which increases CPU. Our database is also underpowered. Speaking of which...

I tried very hard to work with DynamoDB but I just couldn't justify using under current conditions. After a month of part time learning (I was still employed at this time), I decided to go with Postgresql. My rationale:

Any minor mistake implementing authentication can lead to catastrophic results. It's a solved problem and I'm not as smart as the people who already solved it. At this point, I already determined that we would eventually have multiple front ends (web and mobile). Session cookies were a no go. So I started looking for a solution that would manage auth/refresh tokens for me.

Cognito was the first one I tried. At first glace, it met all my requirements. Cognito would manage all usernames/passwords as well as JWTs. However, I soon realized that Cognito is a forever solution. There is no way to export password hashes out of Cognito. If we ever needed to migrate away from Cognito, we would have to force all users to reset their password.

In the end, I went with rodauth. Popular solutions like Devise wouldn't work since it's built for Rails. Rodauth on the other hand works with any rack based application. I was pleasantly surprised to discover such as feature rich authentication gem. Janko wrote a great article about it using it with Rails. If there's enough demand I might write an article about using it with Jets.

My serverless dream involves setting up the infrastructure once and forgetting about it. Hopefully, when we get some crazy Black Friday like traffic, Lambda and Aurora can work it's magic and scale without me lifting a finger. Will it work and be seamless for users? Ask me again in 6-12 months. We may not be completely serverless at that point though.

There's a high chance we'll need some sort of dedicated search service like Elasticsearch in the future. I'm not aware of any serverless solution AWS provides. AWS Elasticsearch Service and Cloudsearch are fully managed services. What's the difference? Fully managed services still require you to configure instance type/size, multi-AZ, and in some cases storage/backup. I'm fairly comfortable working with AWS services and would have no problem configuring them to be highly available and durable but if I can off load this work I will.

Next week I'll write about why I chose NextJS and TailwindCSS for the frontend.

🔒 Next Auth vs SST Auth

Once suspended, wivarn will not be able to comment or publish posts until their suspension is removed.

Once unsuspended, wivarn will be able to comment and publish posts again.

Once unpublished, all posts by wivarn will become hidden and only accessible to themselves.

If wivarn is not suspended, they can still re-publish their posts from their dashboard.

Once unpublished, this post will become invisible to the public and only accessible to Ivan Wong.

Thanks for keeping DEV Community 👩‍💻👨‍💻 safe. Here is what you can do to flag wivarn:

Unflagging wivarn will restore default visibility to their posts.