Developing (learning to develop) a mobile app was on my list for several years. I was too lazy to learn a new language (Objective C) and Android Java development seemed a little convoluted. Then came the hybrid model (basically Cordova), and new language or iOS (Swift), and different other languages and frameworks: Xamarin, NativeScript, Flutter, ReactNative, Ionic.

Now that Ionic supports React and has a novel way of deploying on mobile - Capacitor. I finally decided to give it a try.

My first order concern was Social Login. If I am to build an app, I want to lower the barrier of entry by allowing them to login with popular social platforms.

I have built web applications that used social login using OpenID Connect (OIDC) specification, using the OAuth 2.0 Authorization Code grant type. But I was not sure how that would work in a mobile environment using the hybrid model, which is basically a web app running locally on the device.

So this is my write up on the Ionic React Google Login Proof of Concept (PoC) based on a demo repo I found in GitHub.

I did some research and found few libraries that can help me integrate Auth in Ionic app built with Capacitor:

The other alternative is to use Ionic’s Auth Connect which requires you to purchase the license.

I ultimately decided to go for #1 - to use the ionic-appauth library. It is open source (no license required), and is based on standard using Oauth2 Authorization Code Grant with Proof Key for Code Exchange (PKCE), which means you have a wider option of choosing the auth server providers.

The rest of the article gives a quick instruction on how to configure and run the ionic-appauth Demo App with Okta and Google Login.

This article by Matt Raible was key input to my PoC.

Setting Up the Auth Server & Configuring the App

As I previously mentioned, React is my framework of choice. Thankfully I found a Ionic React AppAuh demo app in GitHub which facilitated my PoC.

Sadly the demo doesn’t come with any documentation, not even README, so I had to analyze the code. Fortunately the codebase is simple. I found that the auth related configurations are set in the src/services/AuthService.ts file.

I just needed to modify the values in the authConfig:

I used Okta as the Auth Server. The free developer account was sufficient to run the Demo. You can create one at https://developer.okta.com.

A quick summary of setting up Okta is as follows:

Since the title of this article is about Social Login, we will add federated Google login.
In Okta,

Finally, for the demo app to connect with Google IdP through Okta, you must send extra parameters in the authService.signIn() method:

Initially I used Auth0 as my Auth server but learned that the OIDC well-known endpoint returns metadata with missing end_session_endpoint attribute. This caused the app to fail when I clicked the “Sign Out” Button.

Now that it is properly configured you can run the application locally as web app:

The command will open the browser tab and load the app. I suggest opening the page in an incognito tab to avoid the cache interfering with full login experience. 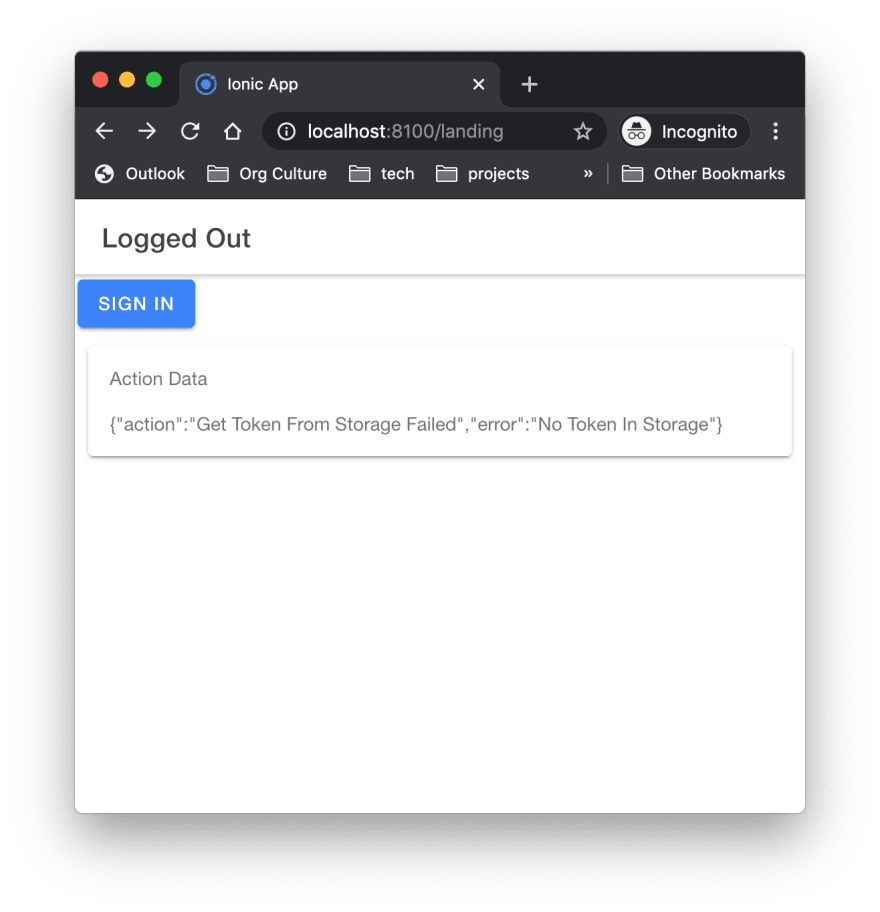 And when you click on "Sign In" button, it will take you to the Google Login form: 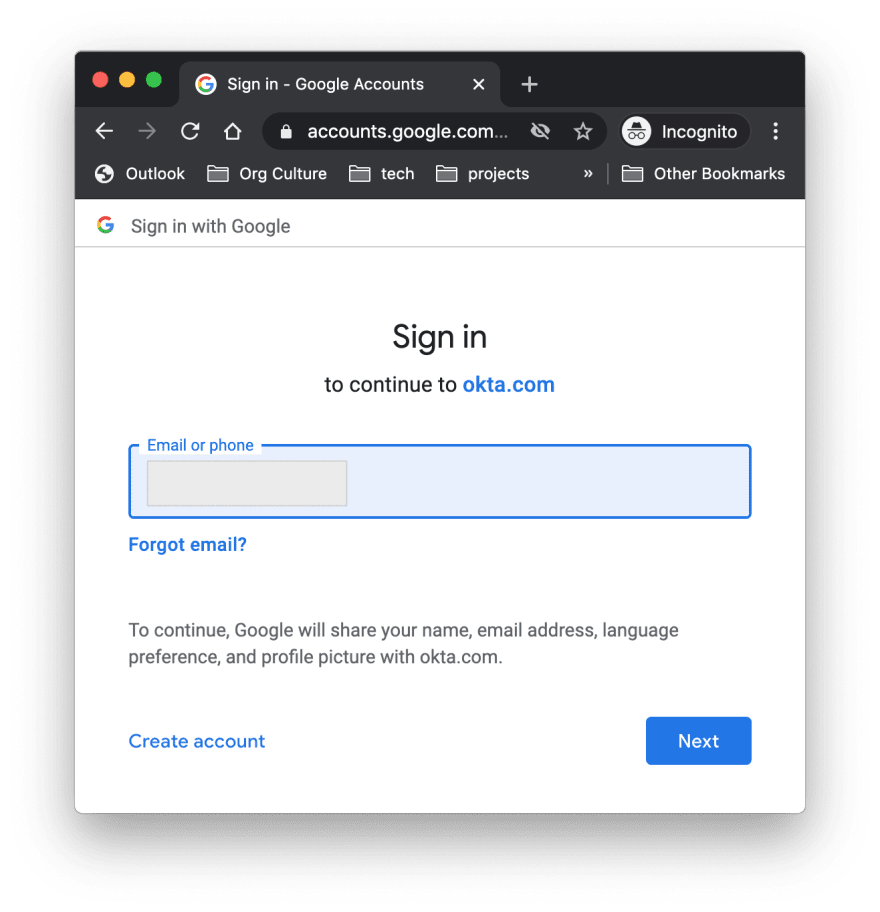 Once successfully logged in, you should be able to get the user details: 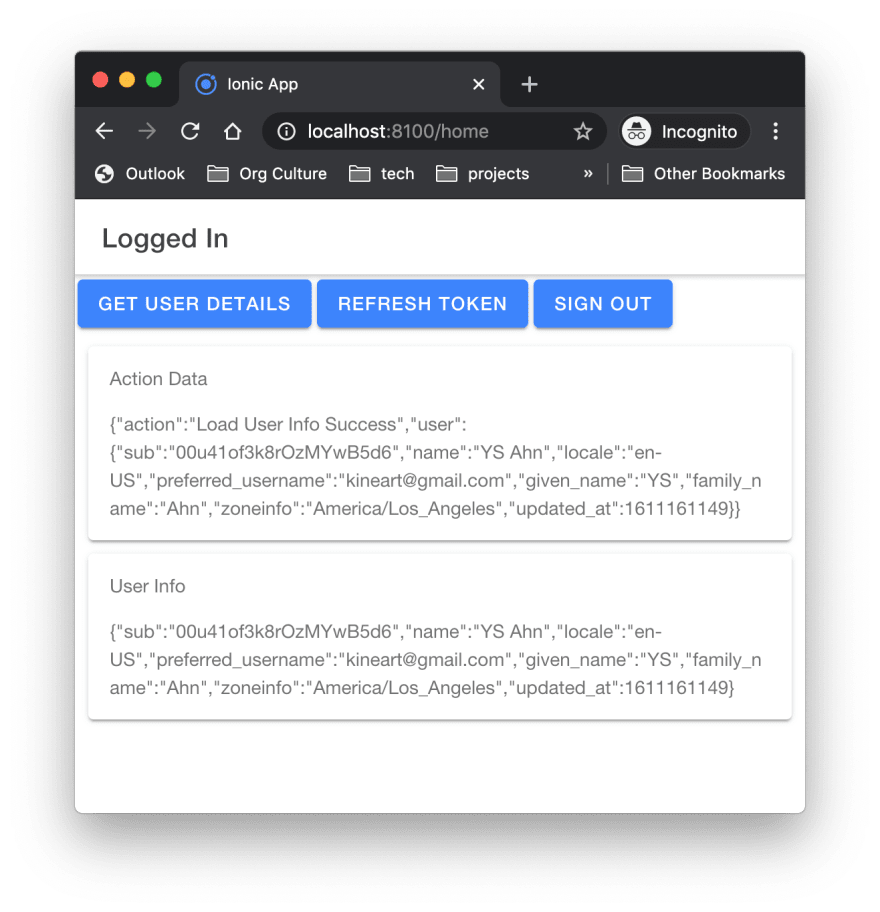 We are not done yet. Now we are going to proceed to deploy to mobile using Capacitor.

Assuming you have Android Studio, the last command will open the Android Studio(AS), an IDE based on IntelliJ.
From AS, select the preferred device (simulator) - any Pixel should be fine - and press the play button.
Once the device simulator shows up, press the "on" button to turn it on. Wait about a minute until the app is loaded on the screen.

Here I have demonstrated that it is possible to integrate Ionic React mobile app with social login - in this case Google.

The demo repo https://github.com/wi3land/ionic-appauth-react-demo uses an older version of ionic-appauth, new never version has few braking changes in the API.

I have forked the project and made some minor changes including upgrading the ionic-appauth version to the latest and externalizing the configuration to .env file.

You can check my forked project with the improvements: https://github.com/creasoft-dev/ionic-appauth-react-demo.

Now that I have completed the PoC on authentication, my next step is to start building my real app.

I will post my learnings on building a mobile app using Ionic React + Redux + Redux Toolkit.