This post is about postgres JDBC (PGJDBC) prepared statements, the setting prepareThreshold, and the performance implication of it.

what is a prepared statement?

A prepared statement is statement that is defined so that it's variables can be set, and executed. An example:

what are the advantages of a prepared statement?

Once a prepared statement exists in postgres, postgres can choose a generic plan, which -if chosen- means the planning step in postgres will be skipped, which is a further reduction of work, and thus a potential improvement in performance.

But there are some details that need to be aligned to make this working predictably. Also mind this is not a solution for every case.

On the client/java side there are a few settings with default values that dictate how the client uses prepared statements. The client also dictates how the server side of this is handled.

The following settings can found on the postgres jdbc documentation website:

On the database side there are two mechanisms in play that need to be understood. These mechanisms have no settings that can change the behavior in postgres version 11. Starting from postgres version 12 there's the setting plan_cache_mode for changing the planner's generic/custom plan choice.

Once the client reaches the fifth (prepareThreshold) execution, JDBC will create a server side prepared statement and execute that.

If a connection pool cannot guarantee it can keep the client session linked with the same server session, such as statement and transaction pool mode with pgbouncer, then prepared statements cannot work successfully.

During the bind phase of the server side execution, the bind values are taken and used by the planner to generate a custom plan. A prepared statement by default takes 5 custom plans before it is considering a generic plan. A custom plan means the planner computes the plan. A generic plan needs to be computed too, but if it is chosen, it sticks with the generic plan and skips plan computing, which is a further optimization. The plan choice can be influenced starting from postgres version 12 with the plan_cache_mode setting.

A thing that I think is important to highlight is the persistent myth of prepared statement creation generating an extra (network?) roundtrip. When using a current JDBC version (which is what I have tested with), the server side prepared statement generation is simply a slightly different version of parsing for the postgres server. If the request size allows it, in a regular request and the request of creating a prepared statement, the parse, bind and execute steps are inside a single packet.

what's in it for me?

Now that I've listed all the details, the obvious next question is: how much do I actually benefit from it? The short answer is that this depends on a lot of factors. However, to still be able to answer it, I created a java program that allows you to run it in your own environment so you can see and measure the effects.

Below is a bar chart of the results from running the tests on my machine in a virtualbox virtual machine. 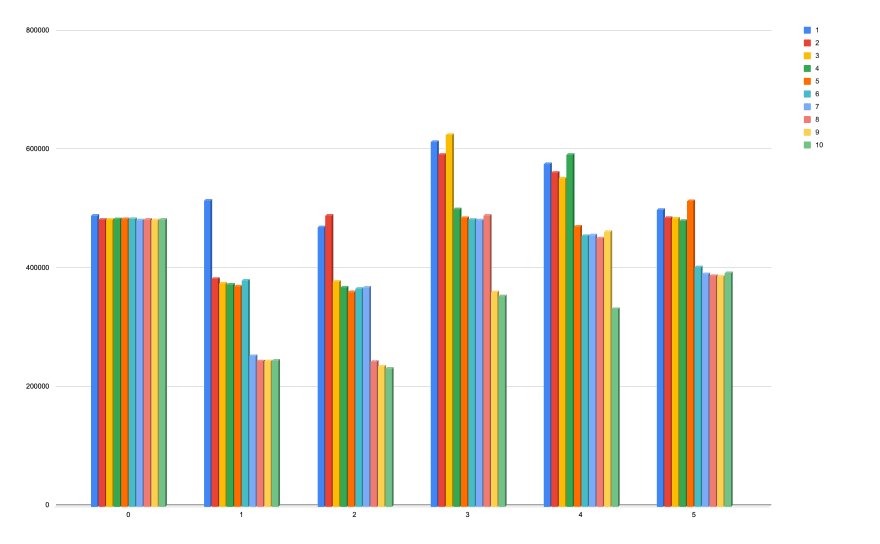 Once a server side prepared statement is created, successive executions have reduced latency because the parse phase is skipped. The rate depending on the architecture of your application, this gives lower latency and reduced CPU usage.

After again five executions a prepared statement gathered enough custom plan costs to consider a generic plan. If a generic plan is chosen, the plan generation step is omitted, which gives lower latency and reduces CPU usage, ratio depending on application architecture.

So far, in a (simple!) laboratory environment, I have shown how prepareThreshold and the generic planner threshold, and have proven there are no negative performance side-effects of setting the value of prepareThreshold to 1 (default: 5) to get a server side prepared statements as soon as possible, which leads to crossing the generic planner threshold as soon as possible, leading to potentially the most efficient way in the least amount of executions (6).

How to build an Application with PHP and PostgreSQL

How to Setup Keycloak With MySQL Database using CLI in Docker

Once suspended, yugabyte will not be able to comment or publish posts until their suspension is removed.

Once unsuspended, yugabyte will be able to comment and publish posts again.

Once unpublished, all posts by yugabyte will become hidden and only accessible to themselves.

If yugabyte is not suspended, they can still re-publish their posts from their dashboard.

Once unpublished, this post will become invisible to the public and only accessible to Frits Hoogland.

Thanks for keeping DEV Community 👩‍💻👨‍💻 safe. Here is what you can do to flag yugabyte:

Unflagging yugabyte will restore default visibility to their posts.