Ok, first things first. I am not a 10xer or pro at patterns so if there is any discrepancy, please correct me. This will only improve my and your understanding of the concept.
With that little disclaimer out of the way, let's dig in.

You might have heard the term PubSub being thrown around alot (especially since Angular made Reactive pattern/event-driven pattern famous in front-end world) or maybe you just stumbled here by accident. Either way, if you are wondering what this PubSub mumbo-jumbo is, this post will help you understand the concept a little better, along with a basic implementation with VanillaJS (Sorry I really love things simple!).

PubSub or Publisher-Subscriber model is a concept which basically involves two ends. Publisher and Subscriber. Or in very simple terms: Giver and Taker. This should tell you something about flow of data in the pattern. Yup, that is right. Publisher will have some data it needs to give (let's not worry about where it got that from right now) which Subscribers take and may:

Well what if the data is not needed by just one person/receiver. Maybe it's a common thing that many people want. Let's say, you are driving down Route 666 and there is a crash 500 metres down. It's unlikely that it's just you alone on 666 (if you are, good luck!), there maybe few others driving along. Imagine how useful this information would be to all of them. Right? Now, let's suppose before getting on Route 666, all of you signed up for this service that gives you updates about events happening along Route 666 until you get off the highway(unsubscribe). So now, all of the people who signed up are Subscribers and your service-provider who you signed up with is your Publisher. Notice how the word event got in there? Well the information is usually sent by Publisher after some "event"(occurs). PubSub is not one-off model. Usually it's an ongoing process. Anyway you get the gist, right? So what did we find out? 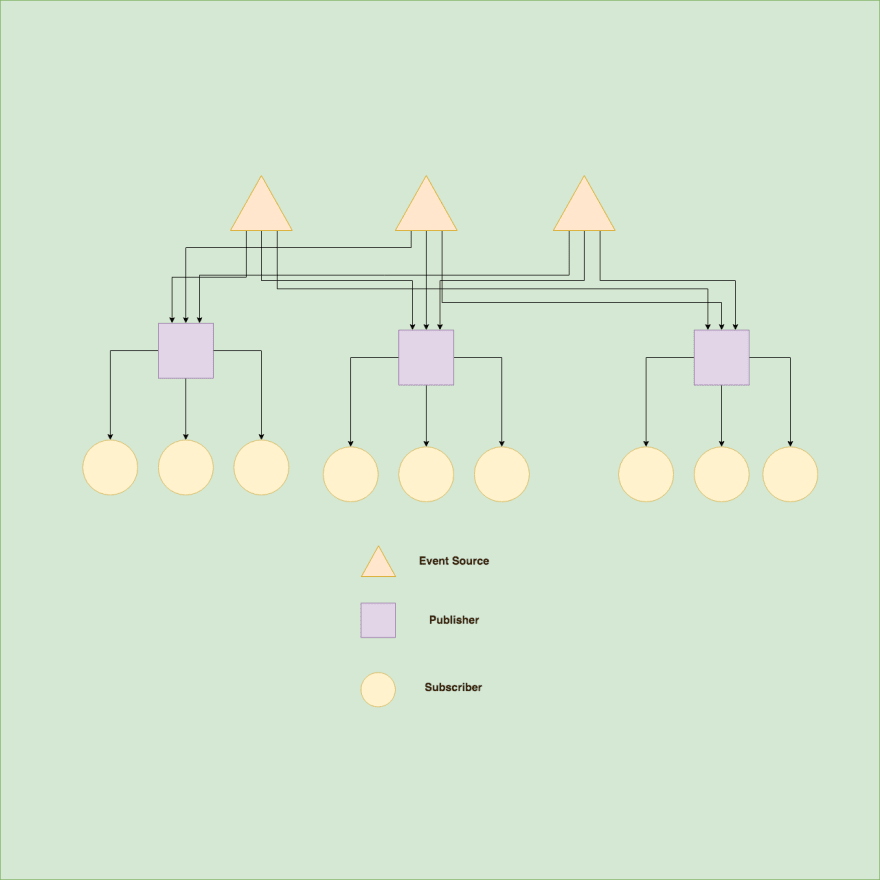 First let us build the barebones structure of our Publisher-Subscriber module. We will take a class based approach which will contain all the pubsub logic as well as any data structure needed. The list below illustrates what we need to accomplish and then we'll build out a barebones structure from that.

To store metadata in our PubSub model, we'll use following variables:

Since we will faking event source, we need additional data and methods to enable that. These are not part of actual Publisher-Subscriber model.

Ok, looks like we have all the ingredients ready, now let's go ahead and build our PubSub model.

What the hell was that?

Sorry, as I said, Javascript natively doesn't support private accessors, we have to use this little workaround to have "private" variables in our class. What we are doing is using IIFE and Closures.
The outer function executes immediately as the script is processed and the function inside it gets called and it returns _PubSubInternal.
Since we are returning _PubSubInternal from inside the function, all the variables and methods declared inside the function will be accessible to this returned class (but not to instantiated object of this class). This is called closure. Pretty cool, right?!

And that is it. This completes our implementation of our Publisher-Subscriber model.

We instantiated our PubSub to pubSub variable which holds reference to PubSub object. subscriber1 and subscriber2 hold the Resource ID of their subscription (subscription id) which can be used later on to unsubscribe. Callbacks get executed whenever new data is pushed to these subscriber. The sample output is below.

To stop subscription and feed, just do:

And that is it folks! Hope you enjoyed the article and learned something new :)

You can tinker around with the implementation on codesandbox