I was curious about testing JavaScript performance and did some research on it.

When I talk about JavaScript performance here, I'm not talking about things like time-to-first-byte, time-to-interaction, etc.. I'm talking about raw computing speed – how long does function X run compared to function Y.

I discovered we can use two methods to test performance – performance.now and Date.now. I was curious about the difference between them, so I made some experiments to document my findings.

The procedure for testing performance is simple. There are three steps:

The difference between the two timestamps will be the amount of time needed to run the operations.

performance.now is said to generate a Dom high-res timestamp, which means it's going to be more accurate than Date.now.

Unfortunately, browsers have to round off this timestamp because of security issues, so it doesn't make much of a difference in the end (according to my findings).

To help with the tests, I created a perf function.

I also created a Date.now equivalent and I named it perfDate

I tested both performance.now and Date.now with a simple operation:

While testing, I realised there's no point in testing one operation because of two reasons.

First, performance.now can measure operations in microseconds but Date.now can't. So we won't be able to see the differences between them.

Second, performance.now gets rounded off to the nearest millisecond in Safari and Firefox. So there's no point comparing anything that takes less than 1ms.

I had to increase the tests to 10 million operations before the numbers begin to make sense.

I ran this code:

Here, I found no major difference between performance.now and Date.now.

I tried stacking perf and perfDate functions to see if there were any differences. The results startled me.

Second and Third tests on Chrome for both perf and perfDate jumped from 8ms to 80ms. That's a 10x increase. I thought I was doing something wrong!

I discovered this increase was caused by defining functions on the fly. If I used a predefined function, the numbers reduced back to 8ms.

Finding #3: It's impossible to get an average result

I realised each performance.now and Date.now resulted in different values. I wanted to get an average of the results, so I added another loop to perf.

(I did the same to perfDate too).

But the results were strange: the elapsed timing for the second loop onwards dropped to zero. This happened for both perf and perfDate. 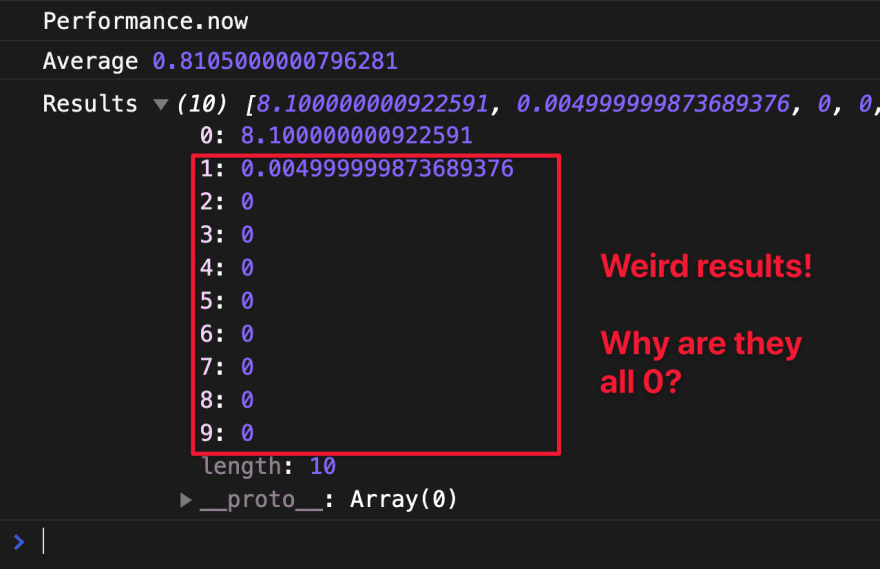 It also happened for all three browsers!

I'm not sure what's wrong here. If you know why, please tell me!

Both performance.now and Date.now can be used to test for JavaScript performance. There isn't a major difference between these two methods though.

When testing on Chrome, make sure you use predefined functions. Don't define functions on the fly or you'll get inaccurate tests.

Zell Liew 🤗
Frontend consultant; teaching frontend to self-taught devs at http://zellwk.com. Currently attempting to demystify Javascript at http://learnjavascript.today.
A library to make localStorage easier to use
#localstorage #javascript #browserapi
Understanding CSRF Attacks
#security #node #express #javascript
How and when to use Async and Defer attributes
#javascript

Once unpublished, this post will become invisible to the public and only accessible to Zell Liew 🤗.

Thanks for keeping DEV Community 👩‍💻👨‍💻 safe. Here is what you can do to flag zellwk:

Unflagging zellwk will restore default visibility to their posts.