disclaimer: Opinions are my own and not the views of my employer

We all know that code should be checked into version control. Terraform code is no different.

What is Terraform State?

When collaborating on Terraform code, HashiCorp recommends using Remote State to store State files remotely, outside of Version Control (Git). All team members need to have access to this remote state storage if they want to test or apply their code contributions.

When feature branches are worked on for a short period of time before merging into the main branch, there are usually no huge integration issues.

However, in the age of Continuous Integration/Continuous Delivery (CI/CD), multiple new features could be worked on in parallel and delivered whenever they are ready. This creates a problem for Terraform and Terraform State management.

Imagine this situation: Alice and Bob are collaborating on a Terraform code repository with the same development remote backend using Amazon S3. Alice has a new requirement to introduce load balancing capabilities, so she checks out a new feature branch to work on it. 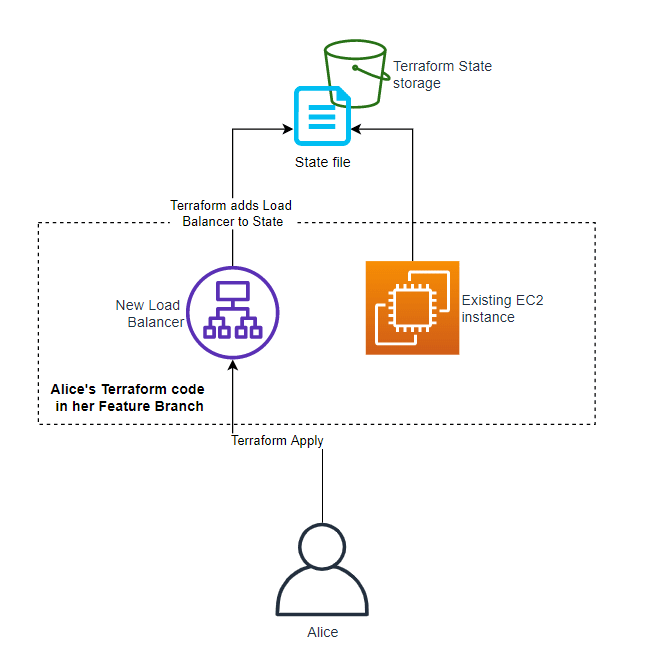 At the same time, Bob also checks out another new feature branch to modify the existing EC2 instance to test a new AMI as part of immutable infrastructure operations. 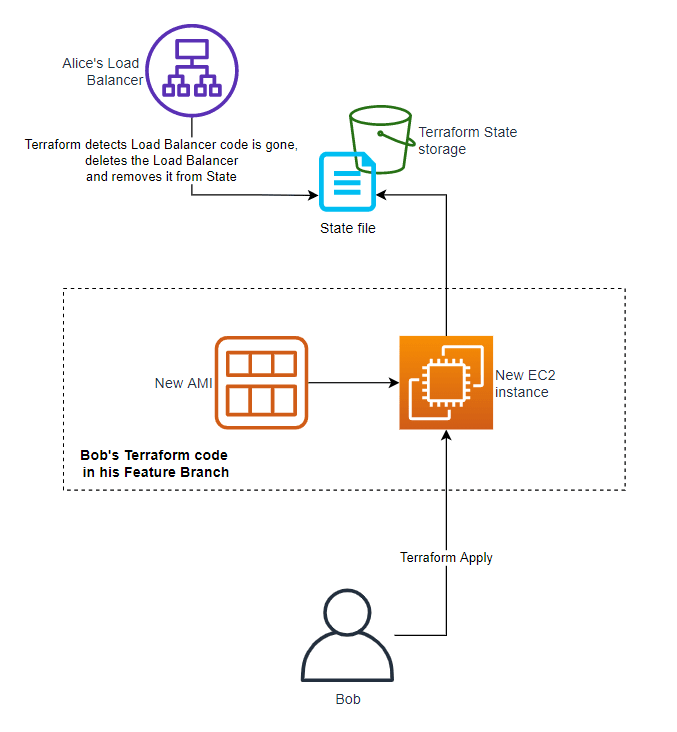 This is highly undesirable and an absolute nightmare for integration testing and Terraform plan/apply.

I first got to realize the problems of feature branches when stumbling across Rod Hilton’s blog post.

Feature branches provides little value when it comes to integration testing and even more so when Terraform doesn’t work when there are multiple branches to modifying a single state file.

In the age of Continuous Integration, pushing and pulling changes to and from the main development branch frequently avoids the inevitable integration hell of merging multiple weeks-old feature branches.

Instead of feature branches, make use of feature toggles to “hide” your features in plain sight until they are ready for testing. Terraform has good support of feature toggle implementation through the usage of count, for_each and conditional expressions.

Using the previous example, Alice and Bob could’ve pushed their code directly into the development branch with feature toggles and it would like something like this:

Merge Directly into Dev Branch only

Merging directly from local into the main branch should only be for the development environment. Production and staging environments should have a different merge and release processes like some of the Git branching examples I’ve shared in the previous section. I am a strong advocate of having 1 branch per environment and I’ll share more on this in a future blog post.

Merging feature code directly into the development/main branch meant that the typical code review processes with pull requests wouldn’t be possible. If code reviews are a necessity, use short-lived feature branches solely for the purpose merging code. You can consider shifting your team’s code review processes to before releasing to your staging environment.

Usage of count and for_each for feature toggles presents some challenges if your team is still on an older Terraform version. Modules do not have native count and for_each support in v0.12 and should be something to keep in mind. You would have to bake the feature toggle into the module itself by passing in true or false values to decide whether to create the resources within the modules. It’s not ideal, but still doable.

Native Module count and for_each is supported in Terraform v0.13 and higher.

Collaborators must be Trusted

To commit directly into the main branch, all collaborators must be on the same team and trusted. This Git branching strategy is not suitable for public repositories.

Thank you for taking the time to read this. Reach out to me if you would like to discuss further.

Once suspended, zhenkai will not be able to comment or publish posts until their suspension is removed.

Once unsuspended, zhenkai will be able to comment and publish posts again.

Once unpublished, all posts by zhenkai will become hidden and only accessible to themselves.

If zhenkai is not suspended, they can still re-publish their posts from their dashboard.

Once unpublished, this post will become invisible to the public and only accessible to Zhen Kai.

Thanks for keeping DEV Community 👩‍💻👨‍💻 safe. Here is what you can do to flag zhenkai:

Unflagging zhenkai will restore default visibility to their posts.