Data Analysis and Visualization plays a major role in computer science fields such as Data Analysis, Big Data and Data science etc. In which they are required to analyze raw data input and try understanding patterns, co-relations and trends to create an output.

This article should help readers learn different ways to represent data in different basic visual forms and what to understand from them.

This article will be explained using Python as it is a high level language and it offers a lot of libraries for visualization such as:

These libraries can be used to import data from file formats such as Excel and convert Random Raw data into Graphs, pie charts, Scatterplots etc.

The dataset used in this article is the 2008 Swing state US elections.

The dataset file was taken from https://www.kaggle.com/aman1py/swing-states

Note: Make sure the CSV file(Excel) is locally downloaded in the system.

The following code is mentioned in the downloadable code block and as well as executed using Jupyter Notebook.

The screenshot of the output is also attached for your understanding.

The data can be imported in Python using panda read_csv method

The first 5 columns of Data can be represented by head() method.

To practice and implement the following dataset must be copied onto a notepad and must be saved as 2008_Election.csv

To display description of mean, standard deviation, maximum and minimum values can be done by describe() method.

Histograms are univariate Analysis and can be used to represent data to understand relations.

Labeling of the Histogram:

Import matplotlib.pyplot library for the code to execute. 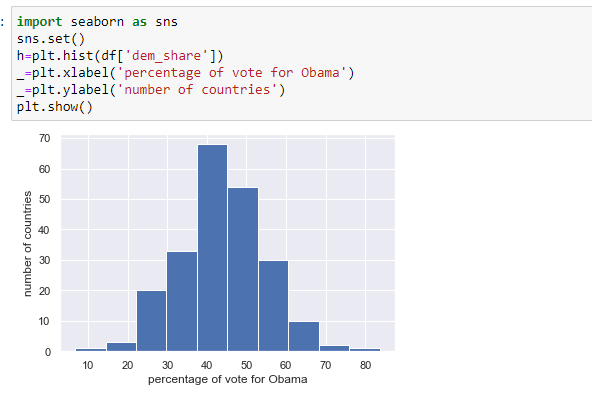 Box plot shows us the median of the data, which represents where the middle data point is. The upper and lower quartiles represent 75 and 25 percentile respectively

Boxplots are represented with sns.boxplot() 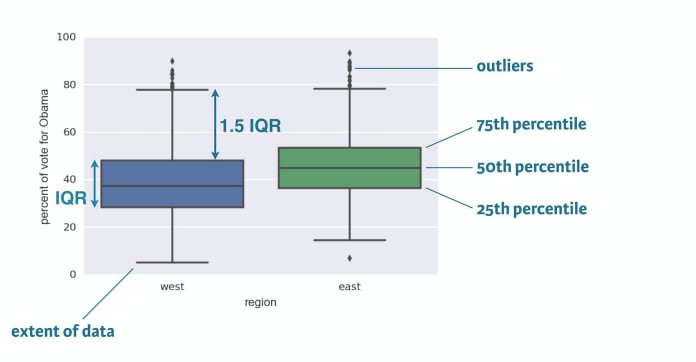 Bee swarm plot is generally used on relatively small data. The primary use of this is to group data with similar function 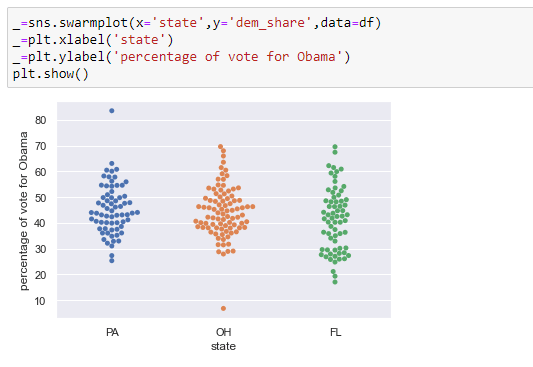 ECDF is an estimator tool which allows a user to plot a particular feature from lowest to highest, it is considered as an alternative to Histograms.

These facts could not be directly understood just from looking at CSV dataset, just by using a few lines of code we have a good understanding of the data and it can be explained to others with Visual proof such as Histograms, ECDF etc.

Top psql commands and flags you need to know | PostgreSQL

Once suspended, 221910301027 will not be able to comment or publish posts until their suspension is removed.

Once unpublished, all posts by 221910301027 will become hidden and only accessible to themselves.

Once unpublished, this post will become invisible to the public and only accessible to Tanay Js.

Unflagging 221910301027 will restore default visibility to their posts.