Let's start with an example file so we can test it out, create a file called "test.js" and insert the following code.

Now we can run it with the "inspect" keyword

The debugger will stop in the first line of code, as you can see in the picture. The little arrow > represents where you're right now, and you can also see some code around it, if you ever find yourself lost, type list(10) and hit enter to show 10 lines around where you are, you can increase the number of lines to have a better view of the code.

From here you can type:

You can inspect variables values by typing "exec " in our case we want to know the value of the variable x, so we type exec x and hit enter

You can use exec to run and print any code that you want. For example, you might wanna know the result of x + 5, you can type it in exec x + 5 and hit enter to see the result

Nothing that you type in the debugger will change your code in any way so you can play around and do whatever you want. In this case, the result will 10 of course. You use the exec call to do any type of complex code execution with the value of your variables, functions anything..., to identify bugs and test possible solutions to your code, let's see a more concrete example.

Create a file named "test2.js" and place the following code

So now let's say you wanna write this "findUser" function but you don't know exactly how to do it, or what it will be the best way of doing it.
We can use the node inspect to test things out quickly and finish writing our findUser function.

Now press "n" until you get where the findUser function is being called. 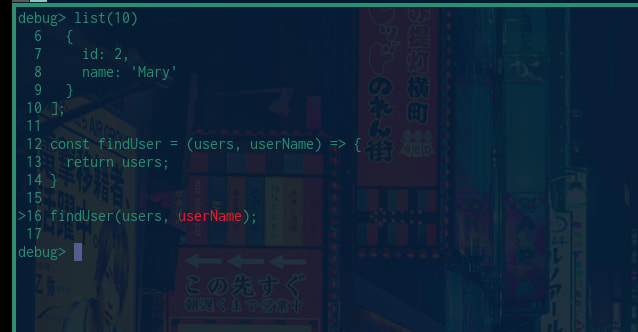 Here you can test different expressions quickly to find the best way to implement what you want. Let's say you had the idea to use "filter" but you're not sure how to do it, using exec you can quickly play around with the users variable and arrive to the solution, which would be something like this.

and you can also of course check the results in real-time. 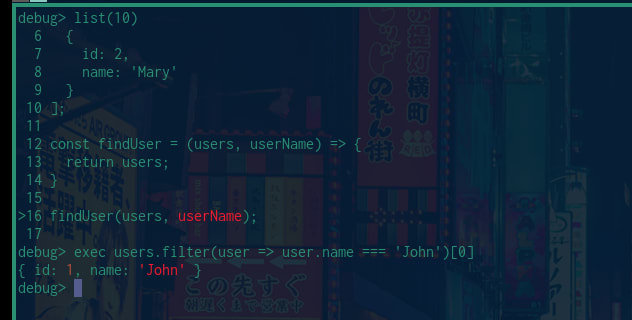 The advantage of doing this over just writing the code in the file, is that you considerably reduce the feedback loop of writing something and see the result which will in turn decrease the time that you take to write code. Not only that and much more important is that you have the correct "state" of the app, so you don't need to keep in your mind the state of the app at that moment, you can just write the code that you think will solve the problem, and see the result for yourself.

The REPL is a just an easier way to do what we did above without having to write exec all the time, you can enter the REPL by typing repl and hitting enter, and you can exit by pressing CTRL+c, the picture below is the same thing that we did before but using the repl instead of running exec.

The last useful piece to debug your code is using watchers, watchers are just a more convenient way to check the values of an expression, the following code is just a simple function that changes the balance of the user. Create a file called test3.js and place the following code.

As we did before run this file with

and hit enter, you should see something like this

In the above image, you can see that the line "0:" represents the watcher that you've created, "users[0].balance = 100" so John starts with 100 dollars in his balance, you can keep pressing n to go through the code and every time the debugger moves the expression will be re-evaluated with the current value if you also want to watch how "Mary" balance changes over time you can create a watcher for her just like you did for John

You can also debug with Chrome DevTools but I wouldn't recommend it because it's harder to set up slower and adds no real advantage, If you're interested in learning more you can read more about it here.

Have a great day 😄

Once suspended, ____marcell will not be able to comment or publish posts until their suspension is removed.

Once unsuspended, ____marcell will be able to comment and publish posts again.

Once unpublished, all posts by ____marcell will become hidden and only accessible to themselves.

If ____marcell is not suspended, they can still re-publish their posts from their dashboard.

Once unpublished, this post will become invisible to the public and only accessible to Marcell Cruz.

Thanks for keeping DEV Community 👩‍💻👨‍💻 safe. Here is what you can do to flag ____marcell:

Unflagging ____marcell will restore default visibility to their posts.