Let us consider an example problem where we want to predict whether a student will pass or fail a class given the number of lectures attended(x1) and the number of hours spent(x2) on the final project by the student.

We can represent this problem with the following model: 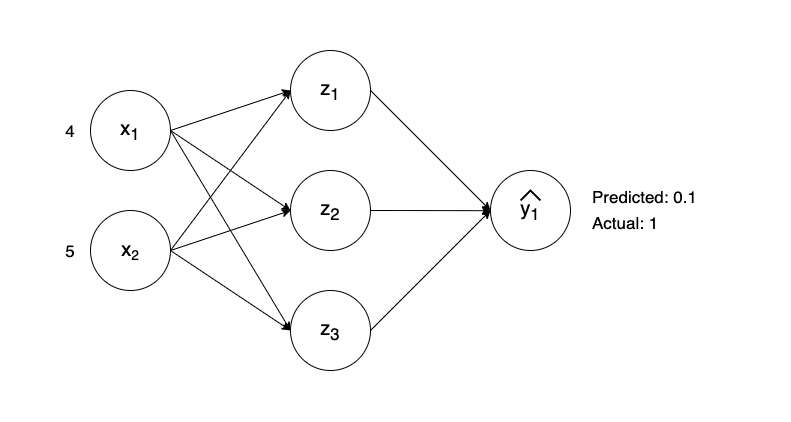 To make a prediction, we need to initialize the weights(W). We can start by initializing weights randomly. Now let us say, for a student who attended 4 lectures and spent 5 hours on the final project, the model predicted output of 0.1 or 10%. But in reality, the student passed the class. We need a way to tell our model that the predicted output was wrong so that the model can adjust its weights to predict an output closer to the actual value. This can be done by defining a loss function:

We can average up the loss for each training set sample to calculate the final average loss. This is also called the cost function or empirical loss.

We can use different loss functions for different models depending on the output produced by the model. Some of the common functions include mean squared error loss & binary cross-entropy loss

Mean Squared Error Loss can be used with models that produce continuous numbers as output. An example of this would be predicting the score of a student or the price of a house.

Binary Cross-Entropy Loss can be used with models that produce a probability between 0 & 1. An example of this would be predicting whether a student will pass or fail.

The final piece left in training the model is to optimize the loss. By optimizing we mean that we want to minimize the loss of the model over all the inputs in the training data. This can be achieved by using an optimization algorithm called Gradient Descent.

In this post, we learned how loss is calculated for a neural network. In the next post and final post, we will learn about the Gradient Descent Algorithm and how it can be used to minimize the loss so that our model can predict outputs with better accuracy.

I would love to hear your views and feedback. Feel free to hit me up on Twitter.

Going to Production with Github Actions, Metaflow and AWS SageMaker

Once suspended, _akshaym will not be able to comment or publish posts until their suspension is removed.

Once unsuspended, _akshaym will be able to comment and publish posts again.

Once unpublished, all posts by _akshaym will become hidden and only accessible to themselves.

If _akshaym is not suspended, they can still re-publish their posts from their dashboard.

Once unpublished, this post will become invisible to the public and only accessible to Akshay Mahajan.

Thanks for keeping DEV Community 👩‍💻👨‍💻 safe. Here is what you can do to flag _akshaym:

Unflagging _akshaym will restore default visibility to their posts.