I won't bore you by describing the rest of your day in this very strange house in detail, but you can imagine getting a knife to spread some peanut butter on your bread from the "cutters" room, where you also keep your razors and garden shears. It'd obviously be incredibly inconvenient of your house were laid out that way. And yet, we often structure our code bases this way.

Why Is This So Inconvenient?

So let's have a look at an example code base for a hypothetical blogging application. Since it's a hypothetical code base, I'm not using any specific web/database/... framework here.
The code will be written in Python, but you don't need to know Python to get the point of this post.

This looks like an MVC application. Let's take a look at the controllers/posts.py file:

This code might look reasonable, but there's a problem when things change. For example, the file above imports functions from manny other modules. If any of these modules changes their public interface, this file needs to be updated. But since the file is not located near the change, you need to search through the entire code base to see where the changed function is called in order to update the calls. For a more concrete example, imagine you are asked to add a "banner_image" field to posts to make them more visually interesting. This required changes in:

While this isn't too bad in a code base of this size, as your code base grows, it becomes harder to track down where things need to be changed. Having to jump around this much also makes the code base harder to understan. The reason we're editing files all over the place to add a feature is because we've grouped files by what type of code they hold in terms of te MVC pattern, rather than grouping them by what functionality they provide. 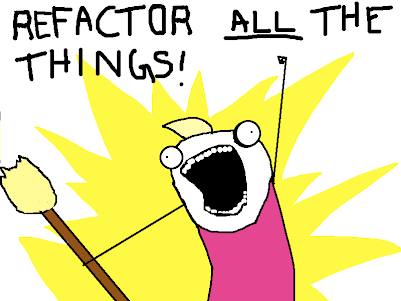 So now, when we need to change something related to posts, you'll likely just have to edit files in /posts, and the same goes for other pieces of functionality. Of course, you may still need to edit code in multiple directories, but at least now you're thinking in terms of which features of the app a change affects.

When talking about what belongs together in a software project, the word Cohesion is often used. As we all know, Wikipedia is the source of all truth on the internet, so let's see what Wikipedia has to say about cohesion.

Ok, so cohesion just means "how much parts of a program belong together". The definition of the term doesn't say anything about how it should be measured, but it is often used without further defining it. People just say you should have "high cohesion".

Later in the same article, there's a list of different types of cohesion, defined by how they are measured.

Studies by various people including Larry Constantine, Edward Yourdon, and Steve McConnell [3] indicate that [...] and functional cohesion is superior.

Functional cohesion sounds a lot like what we just did, right? Grouping things by what functionality they contribute to. So when talking about cohesion, please be specific about what type of cohesion you mean.

I removed a lot of content from this citation because I didn't feel like citing a whole section from Wikipedia and then re-explaining it. I might spend some more time looking into this, and writing another article about cohesion, because I think this Wikipedia article puts too much emphasis on object-oriented programming, and I'd love to take a look at what cohesion means at diferent levels of granularity and in different programming paradigms.

Please let me know what you think on Twitter

Clean up your code with destructors and Array.includes

Should you switch to Multi-region Database Architecture? Know Here!

Frederik 👨‍💻➡️🌐 Creemers
I'm never sure what to put in a bio. If there's anything you want to know, don't be afraid to ask!
Software Engineering VS Civil Engineering
#discuss #architecture #testing
Is The Web Forcing Us to Split Applications the Wrong Way?
#architecture #webdev #discuss

Once suspended, _bigblind will not be able to comment or publish posts until their suspension is removed.

Once unsuspended, _bigblind will be able to comment and publish posts again.

Once unpublished, all posts by _bigblind will become hidden and only accessible to themselves.

If _bigblind is not suspended, they can still re-publish their posts from their dashboard.

Once unpublished, this post will become invisible to the public and only accessible to Frederik 👨‍💻➡️🌐 Creemers.

Thanks for keeping DEV Community 👩‍💻👨‍💻 safe. Here is what you can do to flag _bigblind:

Unflagging _bigblind will restore default visibility to their posts.