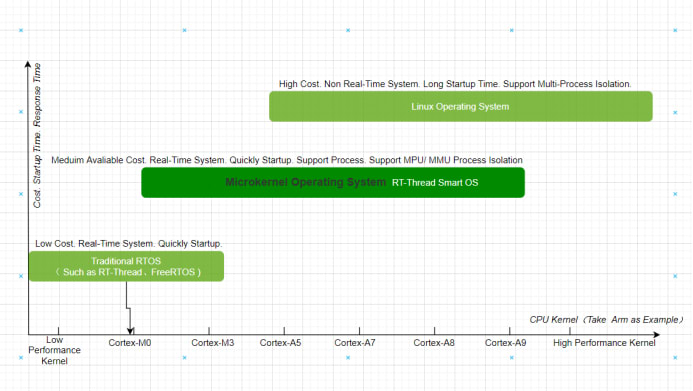 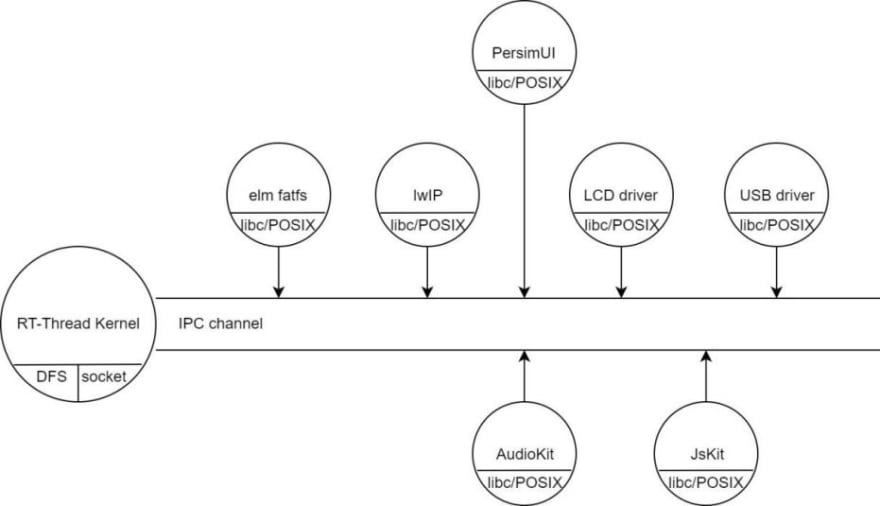 Micro-kernel supports putting system service components or drivers into kernel states to run on demand, for achieving a better performance.

This reduces the coupling between the components and the kernel, making the kernel design more concise. Meanwhile, the inter-process resources are isolated so that the failure of individual services will not affect the normal function of the kernel and other services, making the system more secure and reliable.
RT-Thread Smart shows extraordinary performance on resource consumption, start-up time and real-time features.

Start-up time: With the full supports of filesystems, network protocol stacks and multimedia, it takes 3 to 5 seconds for RT-Thread Smart to finish the startup process. If without running any functional components RT-Thread Smart only requires less than 500 ms to start up. If the persimmon UI component is integrated, the time that the whole system needs from power on to the UI running is about 1.7 seconds.

Real-time: The interrupt latency is less than 1 us, which meets most application cases with strict real-time requirements.
RT-Thread Smart is a lite kernel with its system services running in the user mode. It supports the traditional RT-Thread API to inherit the existing software environments. RT-Thread Smart is also built through scons, which makes it easy to integrate RT-Thread online software packages. What’s more, POSIX interfaces are supported to port Linux applications on it.

As always, RT-Thread Smart will be open-source and applies Apache License v2.0. The code will be released in October.

What to do in case of Ransomware Attack.

Why the Accounting Industry is Adopting Cloud Hosted Virtual Desktops

Once suspended, abby06 will not be able to comment or publish posts until their suspension is removed.

Once unsuspended, abby06 will be able to comment and publish posts again.

Once unpublished, all posts by abby06 will become hidden and only accessible to themselves.

If abby06 is not suspended, they can still re-publish their posts from their dashboard.