Note:
This blog post is based on assignment 1 from the Stanford CS 224N NLP And Deep Learning Course which is available here. I highly recommend this course for people beginning NLP as it is freely available, has great content and is great fun to follow!

Below I hope to outline the concept of word vectors and to show how useful they can be. With the aim of keeping this concise, I will not be discussing implementation details. However these can be found in the course linked at the beginning of this post.

Word vectors (or word embeddings) are vector representations of the meaning of a given word.

Word vectors commonly rely on the fact that words which are commonly found next or close to other words are usually linguistically related (either syntactically or semantically).

In real NLP practices, many of the words surrounding a word are used to create a mathematical definition of the word. This number of words is commonly referred to as the window.

Here is an example of an active window when our centre word is "snowflakes" and with a window size of 1:

Given the sentences above with a window size 1, we would get the following co-occurrence matrix: 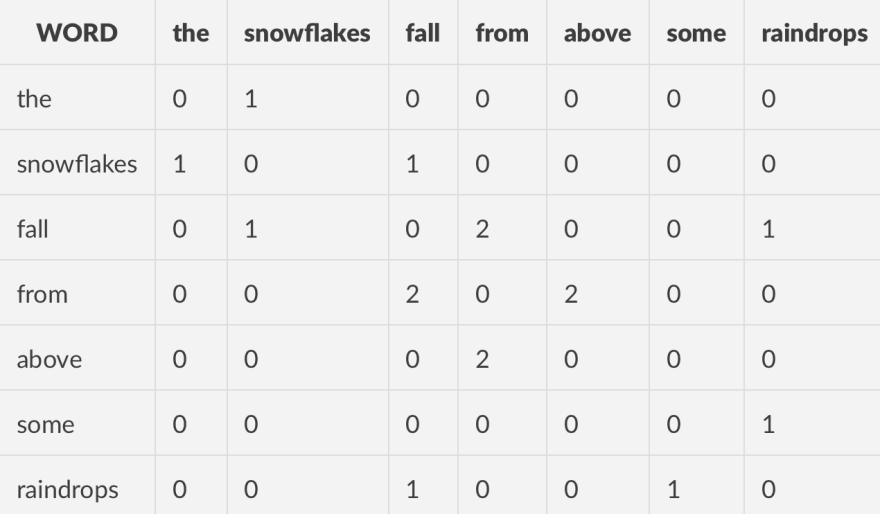 Once you have the vector representations of each word calculated, you effectively have vector definitions for each word. It turns out that you can use vector calculations to interact with these representations. For example, many people learn how to find angles between vectors using cosine similarity.

The more similar the two vectors, the more closely related the two words are likely to be in meaning.

An interesting find which is discussed in the course practical this is based on, revolves around the difference in vectors and using vector representations to explore relations between words as well as meanings.

Once we have a co-occurrence matrix we can see that the dimensions are too large to display on a standard 2D or 3D graph (and would but much much larger in a practical situation with a corpus consisting of more than 7 words)!

In order to represent our matrix on a graph we will have to shrink the matrix so that we have appropriate x and y coordinates.

A popular way to do this is to use SVD (singular value decomposition) .

Since this post is about keeping it simple I won't go into how SVD works but here is a useful resource from MIT on understanding SVD if you want to delve deeper. The key thing for us is that SVD will help us through dimensionality reduction (going from an n x n matrix to a 2 x n matrix).

Once suspended, adamjhawley will not be able to comment or publish posts until their suspension is removed.

Once unsuspended, adamjhawley will be able to comment and publish posts again.

Once unpublished, all posts by adamjhawley will become hidden and only accessible to themselves.

If adamjhawley is not suspended, they can still re-publish their posts from their dashboard.

Once unpublished, this post will become invisible to the public and only accessible to Adam Hawley.

Thanks for keeping DEV Community 👩‍💻👨‍💻 safe. Here is what you can do to flag adamjhawley:

Unflagging adamjhawley will restore default visibility to their posts.