Gradle is a Build Automation tool and is also Open source. This Article will cover the following topics in Gradle.

You can Install Gradle from https://docs.gradle.org/current/userguide/installation.html

Also ensure Gradle is set in the PATH so that gradle commands work.

Creating a Java Application by Using Gradle as Build Tool

Create a folder called as 'simple-gradle-java-app' and enter into the folder in command prompt. This will be our project folder.

Use the following Command to Initialize Gradle for this project

This will ask you to select the type of project to generate. Choose 'application'. This is because we are creating an application

Next you will be asked to select Implementation Language. Choose 'Java'. This is because we are creating a Java Application.

Next you will be asked to Choose Build Script DSL. Choose 'Groovy'. In this Demo we will be using Groovy as the build script language.

Next you will be asked to Select a Test Framework. Choose 'Junit Jupiter'.

For now you can leave the project name and source package as default. 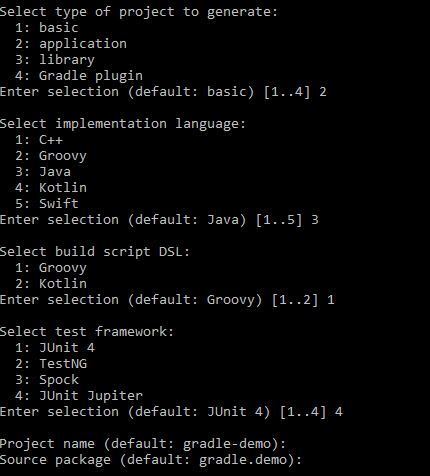 Once the project is created. It would have the following Folder Structure 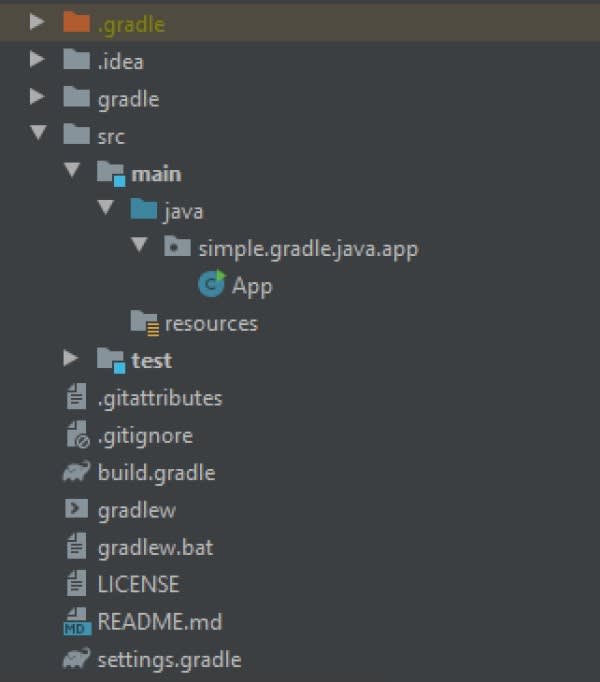 Some of the notable items created in this folder structure are

Modifying the Java Class and Its Test Class

In src/main/java The Init Script has automatically Created a Java Class called as App.java.

This is the Java class which is Automatically generated for us.

Replace the Above Java class with the following Class

We have a function here called as getSum which returns sum of 2 numbers. The main function calls this function.

In src/test/java the Init Script has automatically created a Java Test class for us Called as AppTest.java

The class this is generated is given below

Replace the Above java class with the following

Here we have written a unit test to check if getSum function is working as expected.

First let us build the project using Gradle. This can be done using the following command

Once the build is done, a folder called as build is created which will have the built project and also it would contain information like the test reports.

Then we can run the Application using the following Command

If needed we can clean the build using the below Command

This will delete the build folder.

When we Built the project using the build command, it would automatically run the Test classes as well and Generate the Test reports

The Test reports can be found in build/reports/tests/test/index.html. Open the index.html file using a browser to see the test results.

Now if you want to run only the tests, then you can use the following command.

This will also generate the index.html file. The Test report will look as shown below

Now Let us make an Error on Purpose In the code

Replace App.java with the following

As you can see here, we are always returning num1 instead of num1 + num2 in getSum function which is wrong.

You would notice that now it says that the Task: Test failed. Let's check the report in index.html now to see what it is showing

The Error Clearly shows that it Expected the sum to be 22, But then our App logic is returning 10. Hence the Test has Failed.

Now modify getSum Function in App.java to return ( num1 + num2 ) and re-run the test and it will pass

The build.gradle which was generated has the following snippets. All of these are already Automatically generated for us. So here I will be explaining all the snippets generated

Plugins help to add additional functionality to Groovy. Here we have a java plugin to Support Java Classes. We also have an Application Plugin so that We can build Applications using Groovy

Dependencies is where we add additional libraries need in the project. For Example here we are mentioning that we need junit jupiter dependency for Unit Testing. If you wanted to make a Database connection, then you will need to use a Library like JDBC for it. In that case JDBC will be added as a dependency.

Since we have created a Java application, we need to mention the Java class containing the main class in the build script. In this case it is App.Java.

A Task is a piece of work that the build needs to do. In build.gradle currently we do not see any tasks defined. But a lot of default tasks already exist. You can see them by typing the following command

This will give the following output

We have already used some of these tasks like build, clean, run and test.

The Flexibility of groovy is that we can add Custom Tasks as well. Let's add a Custom Task and then Run the Task. Add the following code snippet in build.gradle

We have written a simple task here which takes the project name , Coverts the name to upper case and then prints the Name in Upper case.

projectupper is name of the Task

group and description are very important since it will list this task in the tasks report whenever we run gradlew.bat tasks

doLast is where we define the task action. We first get the project Name using project.name, then we convert it to upper case and print it.

In order to run the task use the following command

This will generate the following output

This task is a very simple task. We can create much more complex tasks in groovy as well and I will cover those in future articles.

The entire code discussed here is available in this repo https://github.com/aditya-sridhar/simple-gradle-java-app

You know how to use Gradle now. This Article covered some of the basic Concepts of Gradle. Please go over the documentation of Gradle to know more about Gradle.

Once unpublished, this post will become invisible to the public and only accessible to Aditya Sridhar.

Thanks for keeping DEV Community 👩‍💻👨‍💻 safe. Here is what you can do to flag adityasridhar:

Unflagging adityasridhar will restore default visibility to their posts.