I was trying to rebase my branch against the latest main branch one day, which had some new changes from my colleague. Unfortunately, those changes actually had conflicts with the changes on my branch. Obviously, git then asked me to resolve the conflicts when I tried to do a rebase, and so I did. But after I was done, I realized that the changes on my branch no longer worked, and upon further digging, I seemed to have not resolved the conflicts correctly, hence introducing a bug in my branch.

So I tried git diff-ing against the latest main branch again to see what I did wrong. But because the conflicts were quite complex and with all the lines of additions and deletions jumbled in-between each other, detecting the problem couldn't just be done in a glance. I had to resort to a more extreme approach, starting over on my rebase.

That means I had to reset my current branch to the state before I did the rebase, so I had to get that commit hash from before. I cannot get that from my branch now, since if I run git log on my branch, it will show the commit hashes after the rebase. But not to worry, right? Because I could obtain the old commit hash by referring to my branch on remote (in this case BitBucket). And here was when I realized that I did another crucial mistake: I did not push my branch to remote, at all. All my commits were just in my local repository.

git reflog to the rescue

And that was when I stumbled upon git reflog, a handy, little-less-popular feature of git that I love. According to the documentation, git-reflog: 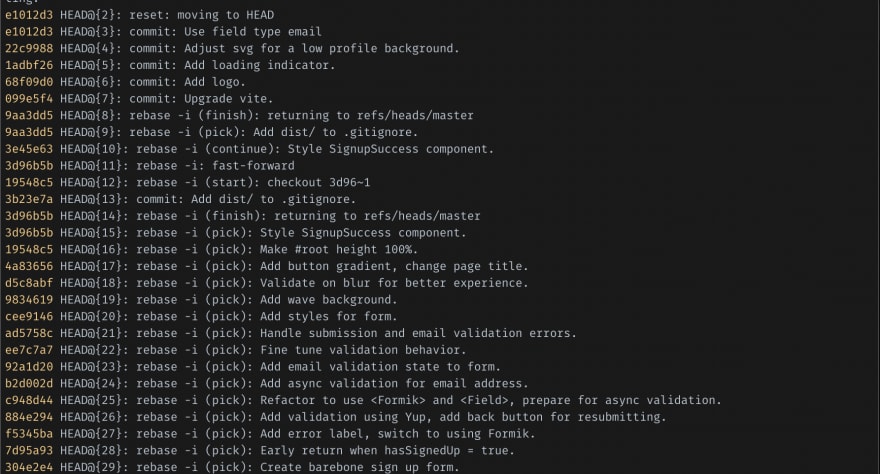 Bringing back the lost commit from the grave

So, with this new knowledge equipped, I could solve the problem I described earlier. I ran git reflog, traced the last commit I made before the rebase and copied its commit hash, and simply ran git reset --hard <the old commit hash>. And voilà, I was back at square 1 (sort of, see Footnote 1). I then re-ran git rebase master to repeat the merge conflict resolution process, and resolved it properly this time.

And that's how you bring back commits from the grave. Yes, you might not need this everyday. But when you do need it, you'd be glad it exists. I know I did.

or if there's a ton of files, just run rm -rf .git/rr-cache.

I actually wish I could disable git rerere. I don't find it useful tbh.

You can run git reflog expire to delete these dangling commits. By default, it'll keep the commits created within the last 90 days. I believe they'll never get deleted ever if you don't run this command or git gc command, but I could be wrong. In any case, I don't think you'll want to dig up dangling commits from beyond 90 days ago. There's gonna be so much noise.

How to contribute to an open source project

Automate your releases on GitHub

How to git resolve conflicts quickly from two commands lines.

Once suspended, afifsohaili will not be able to comment or publish posts until their suspension is removed.

Once unsuspended, afifsohaili will be able to comment and publish posts again.

Once unpublished, all posts by afifsohaili will become hidden and only accessible to themselves.

If afifsohaili is not suspended, they can still re-publish their posts from their dashboard.

Once unpublished, this post will become invisible to the public and only accessible to Afif Sohaili.

Thanks for keeping DEV Community 👩‍💻👨‍💻 safe. Here is what you can do to flag afifsohaili:

Unflagging afifsohaili will restore default visibility to their posts.