A whole new decade has begun. With the non-stop hustle and desire to transform the future, we have already started moving in the direction of the new-age technological developments. Some of these technological changes are global and others affect us on a personal level, but eventually, all of these are going to have a huge impact on our businesses and the way we work.

At the beginning of every year, we discuss which technologies, trends, and developments are going to be at the top of the digital agenda. So here are the top 5 technology trends which will shape the economy in 2020. Let’s have a look: 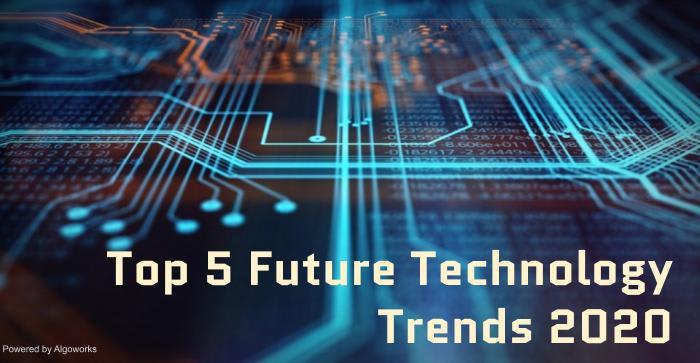 Artificial Intelligence is one of the technologies which has always received a lot of buzz and still continues to be a trend which everyone keenly follows and takes a lot of interest in as it has its effects in almost everything starting from how we live, work, play to fitness, food, animals.

Artificial Intelligence, sometimes called Machine Intelligence, is a wide-ranging branch of computer science concerned with building smart machines that are programmed to think like a human, capable of performing tasks that require human intelligence.

One of the mysterious new upcoming technology that businesses need to adapt is the 5G network. 5G will upraise the mobile network to interconnect and control machines, objects, and devices. It will set new levels of efficiency and performance and connect new industries.

2019 was a pretty good year for 5G but 2020 is the year 5G goes mainstream. According to Qualcomm President Cristiano Amon, “more than 200 million 5G smartphones will ship in 2020.” 5G is a kind of platform that will not only enhance today’s mobile broadband services but will also expand mobile networks to support a huge variety of devices. Through a 5G Economy study, we have found that 5G’s economic effect will be perceived across the globe by 2035, supporting a wide range of industries and potentially producing up to $12 trillion worth of goods and services.

5G is not only about how fast it is, but it will also provide much more network capacity by expanding into a new spectrum, such as millimeter wave (mmWave). But to take this speed and efficiency to everyday mobile users, mobile network carriers will need to increase bandwidth and reduce network costs.

Autonomous Driving is the latest buzz among the millennials. But what will it mean for us? When will we see the first driverless car and what are the next steps?

There have been five levels in the evolution of autonomous driving as defined by the experts. Each level narrates the extent to which a car takes over tasks and responsibilities from its driver and the interaction between the car and the driver.

To produce control systems capable of examining sensory data in order to put up the precise detection of other automobiles and the road ahead is one of the biggest challenges for driverless car designers. Tesla chief Elon Musk already has the future design of autonomous vehicles and aims to go huge in this industry.

Blockchain is one of the trendiest technologies. Though a lot of people think about Blockchain in relation to cryptocurrencies, it offers a high level of security which can be used in many ways. Blockchain is an especially promising technology as it helps in reducing risk and bringing transparency in a scaleable way.

Blockchain has been used and implemented by a lot of industries, hence, there is a tremendous increase in the use of this technology which eventually increases the demand for skilled professionals as well. According to TechCrunch, blockchain-related jobs are the second-fastest growing category of jobs with 14 job openings for every one blockchain developer. With easier plug-and-play blockchain tools available in the market, it enables smaller companies to integrate blockchain without worrying about the costs of development. As a result, there will be a rise in the number of blockchain jobs.

By all measures, 2019 was an extraordinary year for the blockchain. George Spasov, blockchain architect and co-founder at LimeChain says, “2019 has continued what 2018 started – enterprises experimenting. The finger-dipping exercises of the last year have encouraged further experimentation this year while dragging along new experimenters.”

Human augmentation is going to change what it means to be human. It is is a field of research that aims to enhance human abilities through medicine or technology. In the past, humans had to adapt to computers. In the future, computers will adapt to humans. It can also be defined as a process by which a person’s physical and cognitive ability is strengthened. Once implanted in a human being, it will enable the person to execute tasks that were earlier impossible for him/her.

Human augmentation has the capability to make this world a lot more convenient. Gartner Analyst, Daryl Plummer says that the latest technologies like Artificial Intelligence and Virtual Reality will triple the number of people with disabilities employed by 2023. He also predicts that there will be more good news for companies that employ people with disabilities. They will be experiencing higher retention rates, productivity, goodwill, and increased profitability.

These were the top 5 mindblowing technology trends that are expected to take the world by storm in the coming years. Let us know what do you think about these tech trends and also mention the ones you think will rock 2020!

Open Source Has Not Failed. Don't Cover Up Corporate Abuse of Open Source

Open Source: Many of the benefits of socialism without the baggage

Algoworks
Algoworks has expertise in the key areas of Mobile App Development, Salesforce, Enterprise Content Management, DevOps, and SPE. Call us now at +1-877-284-1028.
+20.000 Developers Rename the Wireless Mouse to Hamster - Help Us!🐹
#beginners #tutorial #programming #productivity
When can you declare yourself a Full-stack Dev?
#discuss
I passed the CPACC exam
#a11y #career #certificate

Once suspended, algoworks will not be able to comment or publish posts until their suspension is removed.

Once unsuspended, algoworks will be able to comment and publish posts again.

Once unpublished, all posts by algoworks will become hidden and only accessible to themselves.

If algoworks is not suspended, they can still re-publish their posts from their dashboard.

Once unpublished, this post will become invisible to the public and only accessible to Algoworks.

Thanks for keeping DEV Community 👩‍💻👨‍💻 safe. Here is what you can do to flag algoworks:

Unflagging algoworks will restore default visibility to their posts.