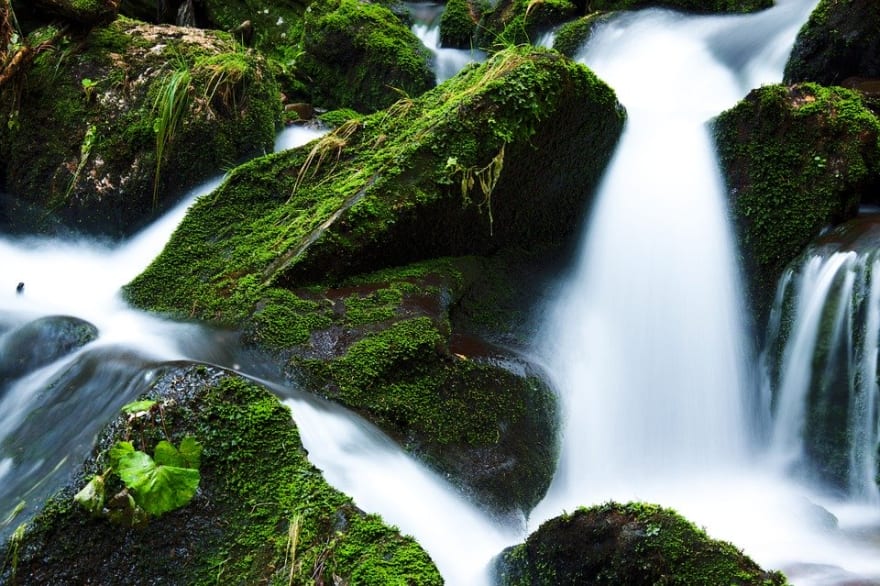 If you’re just starting or a seasoned JavaScript developer, chances are you’ve heard of RxJS.

RxJS is one of the most popular JavaScript Libraries that exists today. This post is going to cover a basic walkthrough of what it is, and how you can use it in your applications.

So before I begin, it helps to get a understanding of the history behind RxJS.

It all started with Reactive Extensions (or ReactiveX). ReactiveX was a concept that was originally invented byErik Meijer. It was an implementation of the Observer Pattern. After it was developed, subsequent programming Libraries were developed around the major languages like .NET and JavaScript.

RxJS is the implementation of Reactive Extensions for JavaScript. The RxJS project was originally started by Matthew Podwysocki and others as independent open source project. Starting around the time of RxJS version 5, Ben Lesh and others improved the project to be more of what it is today.

The RxJS Library implements both the Observer Pattern and the Iterator Pattern.

When you hear people discuss RxJS, you commonly will hear them referring to imperative and declarative coding.

Imperative refers to code that you write in a specific way. This is code that you have manually piped the control flow similar to the way Promises work.

Declarative refers to using declared functions to perform actions. Here you rely upon “pure” functions that can define an event flow. With RxJS you see this in the form of observables and operators.

These definitions will be more apparent to you later on in this post, but its good to introduce them here.

When explaining RxJS it typically is easiest to do by showing code first.

Most people are typically familiar with a Promise implemented as follows: 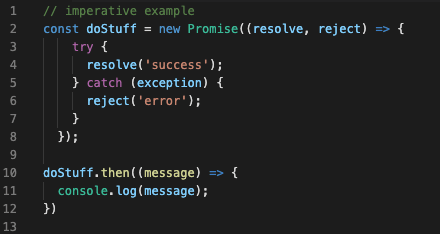 Nothing super exciting here, just using the standard “resolve/reject” syntax. After the promise completes the output message is written to the console.

Now compare that to this: 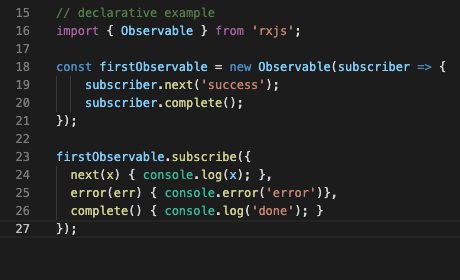 Woah! What’s that? Well that’s RxJS! If you notice, the declarative practice is being used as the observable is first defined, and then the different hooks in the observer are used with next , error, and complete.

I’m going to come back to this example later in this article, but just wanted to introduce it first.

How does RxJS work?

So to start with RxJS, it helps to first have a few definitions:

For more info and examples please refer to the official RxJS Getting Started Guide here.

So with that vocabulary introduced, now we can formally discuss the example I introduced earlier.

So lets go back to the code that I showed before:

This is a great example because it shows you an implemented Observable.

This is one way to define an observable directly. Each observer has the three hooks of next, error, and complete that you can use to define execution behavior.

With operators there are two types:

Here’s a creation operator in action: 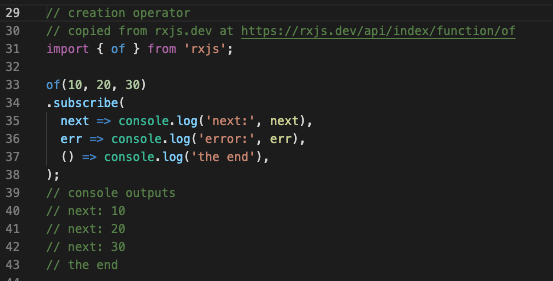 Here we are using the of operator to emit values of 10, 20, and 30 in a sequence. This is super basic, but gives you an idea of how you could use this to emit a set of values in a stream without needing to manually define the observer hooks.

Here’s a pipeable operator in action: 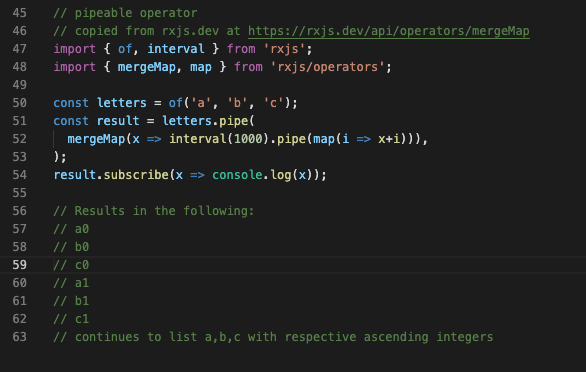 So here, its a little more complicated, but I think you can figure it out.

So basically this creates a flow with the pipeable operators. The original source observable is used to recreate a new observable with added logic.

An easier way to think of this is as a stream is being defined here. Each pipe that is used with the stream adds value.

A more literal way to think of pipeable operators is as water flows through a set of pipes. Each pipe adds value to the water until it exits the flow.

Visually you can see this flow in the following diagram: 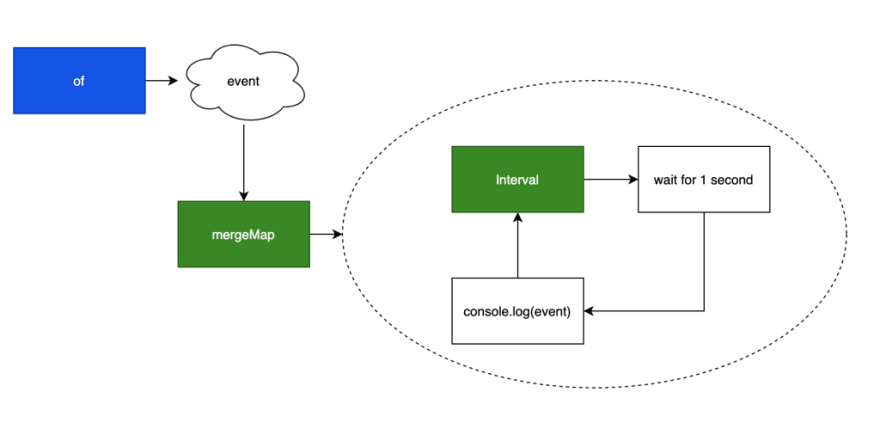 For a better visual of flows with RxJS, many people rely on Marble Diagrams. They’re a little daunting at first, but if you learn how to read them with the RxJS Guide they really help. I recommend checking out the RxJS guide at the bottom of the operators page here.

So one big challenge that developers run into with RxJS is memory leaks with subscriptions.

Memory leaks are when you’ve forgotten to “unsubscribe” from a stream, and the process continues to run eating up your memory. Memory leaks can quickly eat up your browsers memory and slow down your application.

The best solution is to always make sure you have a .unsubscribe for your observables. You also can rely on prebuilt mechansims in frameworks like Angular’s async pipe.

Here’s some code that creates a memory leak:

This code can easily be fixed by adding a setTimeout that unsubscribes from the stream after a set interval of time like so: 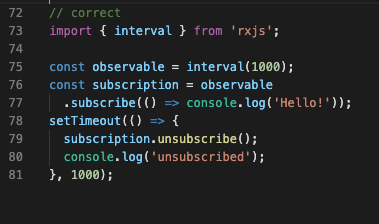 I actually contributed an article on the RxJS DEVTO blog on this topic titled “Common Approaches to Handling Subscriptions” here. I highly recommend checking out my post when you have some time.

So far we’ve just covered some basic execution flows. If you combine RxJS operators, you can define some pretty complicated work in just a small amount of code.

The challenge happens when you create a group of Observables from a single Observable. This is called a Higher Order Observable. RxJS has operators that help you with flattening these situations to include:

I’m not going to dive into a deep example of Higher Order Observables here because I think it goes beyond the scope of an introductory article. I do, however, highly recommend checking out the RxJS Guide on operators that discusses this in more detail.

I also cover a more advanced topic in my RxJS DEVTO blog site post “From Promises to Observables” here. In that case I walkthrough setting up a scan operator to combine several HTTP calls.

I recommend reading posts on the RxJS DEVTO blog site for more advanced Observable cases and discussion as well.

My discussion in this post has just covered the surface of what you can do with RxJS. There are also lots of great materials and videos available on line that provide in depth walkthroughs and examples.

I recommend checking out these videos as a good place to start:

I hope this post has helped you with learning RxJS. In this post I walked through what RxJS is, and ways you can use it in your programs.