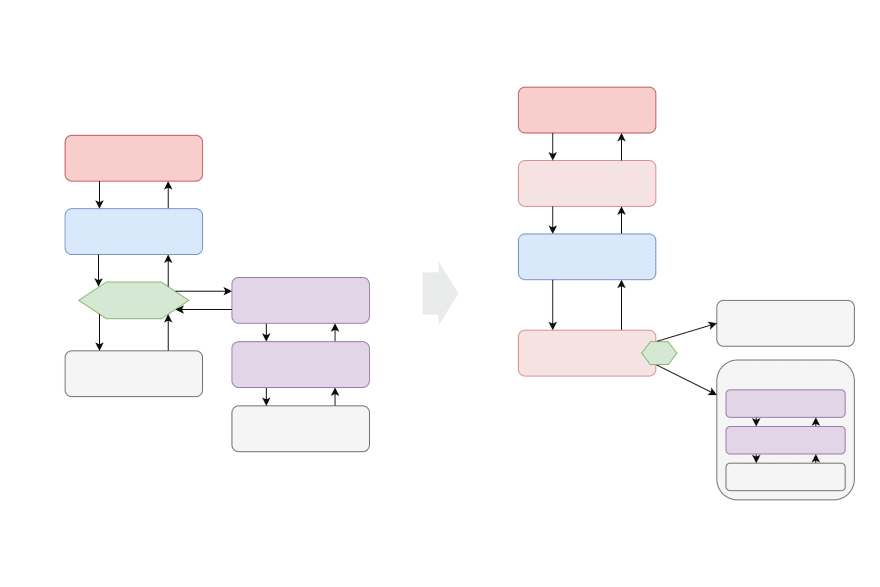 In a recent post I discussed the changes to routing that come in ASP.NET Core 3.0, and how you can convert a "terminal" middleware to the new "endpoint" design. One question I've received is whether that removes the need for "branching" the pipeline, and if not, how can you achieve the same thing with endpoints?

This short post assumes that you've already read my post on converting a terminal middleware to endpoint routing, so if you haven't already, take a look at that one first! I give a quick recap below, but I won't go into details.

In my previous post on terminal middleware I used a VersionMiddleware class as an example. This middleware always returns a response, which is the FileVersion of the app's assembly:

In ASP.NET Core 2.x, you could include the middleware as a conditional branch in your middleware pipeline, so that it only executes if the app receives a request starting with "/version":

This approach creates a middleware pipeline that looks something like the following, with the Map() call branching the pipeline based on the incoming request. 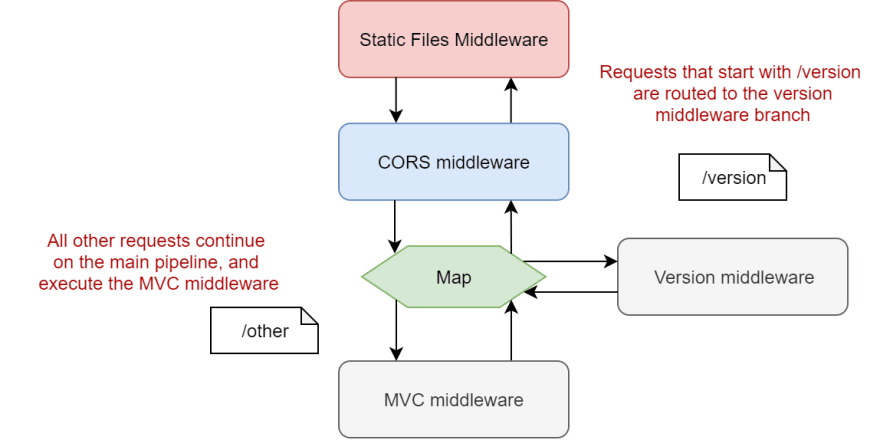 In ASP.NET Core 3.x using the Map() function is generally not idiomatic. Instead, it's more natural to use Endpoint Routing. In my previous post on terminal middleware, I showed how you could take middleware like the VersionMiddleware above, and turn it into an "endpoint" that can be used like this:

This approach is very similar to the original 2.x version, but with a few benefits:

The end result is a bit like the middleware pipeline still branching, but only branching right at the end when it splits into the various endpoints: 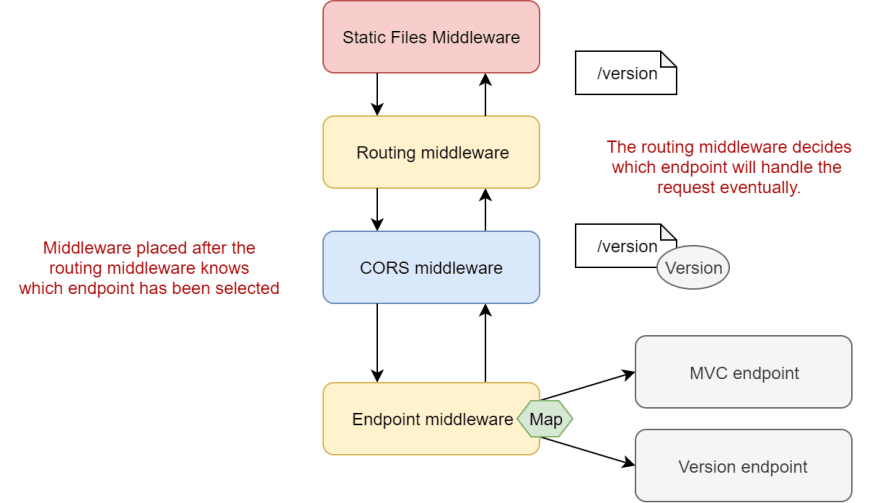 One of the nice things about using Map in 2.x (which is the origin of the question that spawned this post) wass that you are given a whole new IApplicationBuilder that you can add middleware to.

For example, lets say you had a middleware that resizes an image provided in the body of the request, the ResizeImageMiddleware. You don't have the source code for this middleware - maybe you got it from a NuGet package - but you want to add some logging/caching/metrics around the requests. That's easy to do in 2.x, as you can add those extra features as middleware in the Map branch:

Because these middleware are added to the branch, they'll only execute for requests that ultimately hit the ResizeImageMiddleware, not requests that hit the MVC branch 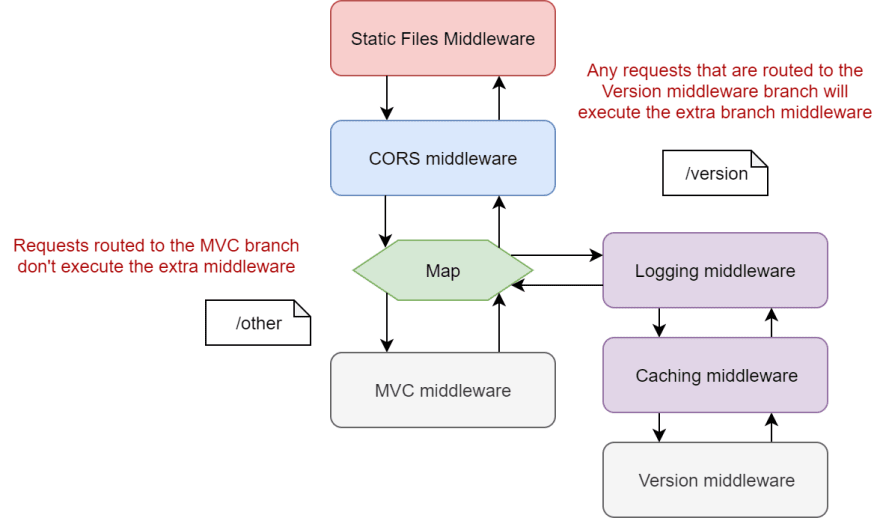 On the face of it, you might feel a bit stuck when you try to do the same thing in ASP.NET Core 3.0. The middleware pipeline is effectively linear if you don't use Map(). You can't do the following, as that would execute the LoggingMiddleware and CachingMiddleware for every request:

Technically you could do this if you customize the LoggingMiddleware and CachingMiddleware to execute based on the endpoint selected inside UseRouting, but there's an easier way.

I showed how you can retrieve the selected endpoint name by calling HttpContext.GetEndpoint() in a recent post on Serilog.

This is the same format of extension method as I showed in my previous post for converting the VersionMiddleware to an endpoint. This code shows that an "endpoint" has its own IApplicationBuilder, which means you're not limited to adding a single piece of middleware, you can add a whole pipeline!

With the updated extension method, our middleware pipeline is again apparently simple:

We get all the benefits of endpoint routing here - we could add Authorization or CORS policies to the image endpoint for example - but we've also kept all the middleware unchanged from ASP.NET Core 2.x. In effect we've cut the resize image "branch" off at the original Map(), and moved it to the end instead: 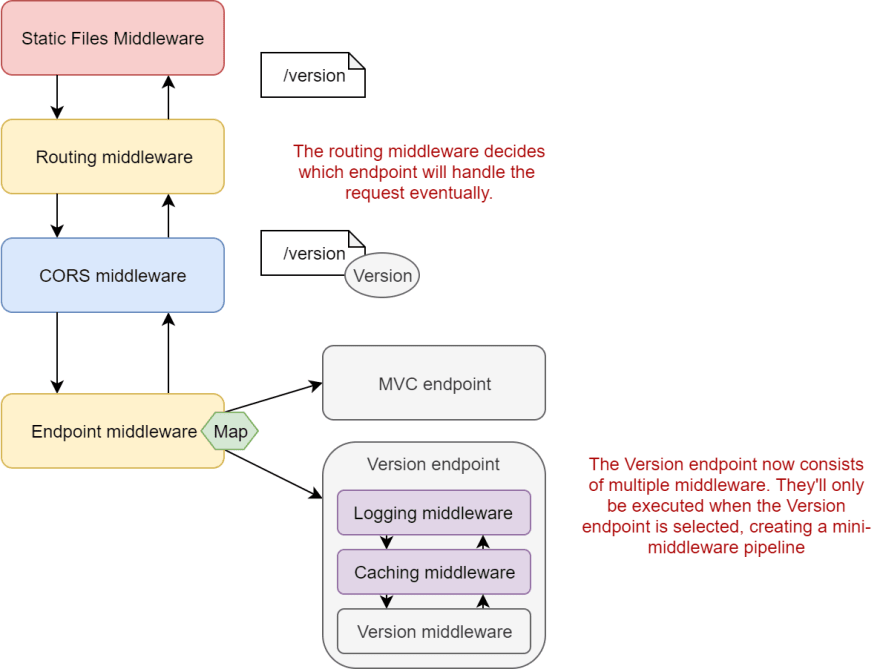 The solution shown above doesn't work in all situations - as far as I know there's no easy way to add extra middleware to the MVC endpoints added by MapDefaultControllerRoute() (or the other MVC endpoint methods). If that's something you need, you could look at using MVC filters as a way to hook into the pipeline instead.

Once suspended, andrewlocknet will not be able to comment or publish posts until their suspension is removed.

Once unsuspended, andrewlocknet will be able to comment and publish posts again.

Once unpublished, all posts by andrewlocknet will become hidden and only accessible to themselves.

If andrewlocknet is not suspended, they can still re-publish their posts from their dashboard.

Once unpublished, this post will become invisible to the public and only accessible to Andrew Lock "Sock".

Thanks for keeping DEV Community 👩‍💻👨‍💻 safe. Here is what you can do to flag andrewlocknet:

Unflagging andrewlocknet will restore default visibility to their posts.