Exactly three years ago, I made my own private copy of Coraline’s lftm and pushed my first commit. Unbelievably, I have kept it up, almost every workday, since then.

LFTM stands for low-friction task management system, and I’ve mentioned it before here.

The README in Coraline’s repo really spells out the simplicity of this system:

The system consists of a number of folders, each containing a specific kind of text file.

It’s a repo with folders and files. There’s some structure provided by the folders, but that’s it.

And, hot damn, if it doesn’t just work. Coraline outlines the benefits she’s experienced like so:

Also, because it’s text, it’s so very searchable. Because it’s local text, searching is also fast and customizable – I can search using the tools in my text editor or the command line.

I’ve made some changes to the LFTM system over my years of use. Right away, I converted the text files to Markdown because I appreciated the just enough formatting it provides, including some syntax highlighting in my editor for things like headings and checkboxes. 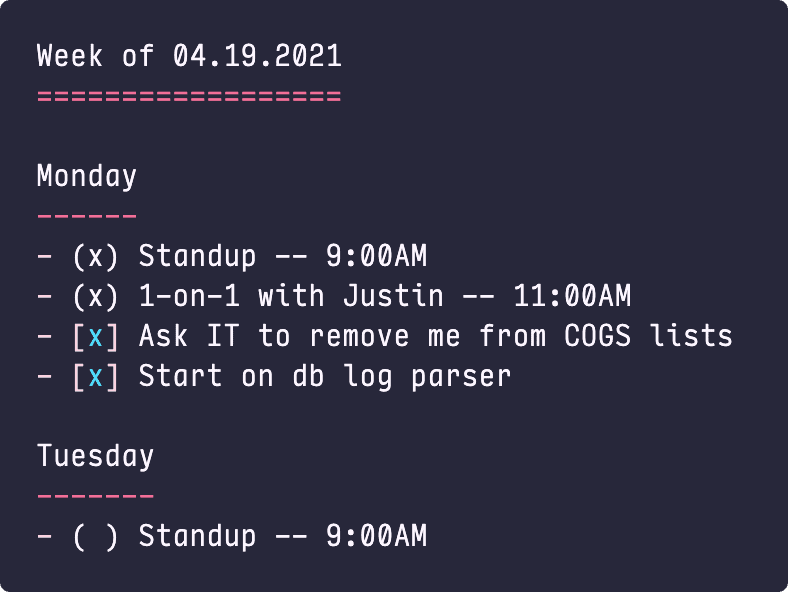 I also updated things like the 1:1 and meeting notes to be in reverse chronological order; this way, whenever I open a file, the most recent information is at the top.

I created my own reusable templates for the weekly journal and projects. The project template is specifically inspired by the questions and prompts in Sarah Doody’s post on documenting UX work.

Coraline’s system includes prompts for a weekly retrospective which I found helpful, but was inconsistent in using. This summer, I attended a handful of Meaghan Warner’s Mondaze Motivation calls and discovered I was far more successful and doing some Monday morning reflection and planning than I was at accomplishing the same things on a Friday afternoon. As a result, I’ve incorporated Meaghan’s prompts into my own weekly kickoff template

Finally, I added a wee bit of automation to the process, including a Ruby script to create a weekly template with the current date and another that uses the Google Calendar API to list yesterday’s and today’s calendar events.

Every Monday, I start my week by running the new-week script and spend 20-30 minutes reflecting on the previous week and planning for the current one. (I haven’t really been saving individual copies of the kickoff file, though its iterations exist in git history. I may change how I’m doing this in the future. 🤷🏻‍♀️)

Each work day morning, I run the today script. I copy the calendar events from the generated today.md file over to the current day, which gives me an opportunity to review what’s ahead of me.

I keep the weekly file open in my text editor throughout the day, marking off meetings and tasks as I move through them. I use a system inspired by bullet journaling, where meetings are identified by parentheses and tasks use square brackets:

Meeting notes get added to their respective files, with action items regularly copied over to the weekly journal. While I have shared 1:1 documents with each of my direct reports, the notes in my LFTM folder allow me to keep private notes, too, including things like favorite treats or pets’ names.

Since I have a pretty clicky keyboard, I often take meeting notes by hand and then, in the space between meetings, figure out what’s helpful to move into an LFTM doc. While this seems like an unnecessary duplication of effort, I find it’s helpful to separate my note-taking activity from organizing those notes or establishing what I’ll want to remember later.

While I’ve adequately explained how I add to and track things in LFTM, where the system really shines is when I almost very nearly remember something…and then search and voilà! have the information I’m looking for immediately at hand. Similarly, I also use my LFTM notes to review things – before 1:1s, before reviews, before meetings. In general, the system makes me feel like I always have the proper context for something and rarely am the person in a meeting who can’t remember our goals or action items.

Combined with the Monday kickoff, the system allows me to organize tasks, take notes and to reflect on things. Together, it lets me be a person who has her shit together and gets shit done.

I’ve always been an avid note taker, so I shouldn’t be surprised that this system works for me. Mostly it harnesses something I do automatically and make it more meaningful and long lasting.

Also, it allows me to take notes and create tasks where I already am – in a text editor. There’s no app version of this system, so if I’m not immediately in front of my laptop, I absolutely have to rely on a secondary system (like a notebook) until such time as I’m back at my computer. I know for many folks this would be a dealbreaker, but as someone who works from home and uses this system mainly for work tasks, it’s actually perfect.

While there isn’t an app, by saving my notes to a private repo, I do have a cloud backup of my notes and am able to use them on multiple machines. Again, for me, this is enough.

Finally, as I’ve said before, I mostly use this system for work tasks–both my day job and teaching. I haven’t been as successful using it for personal tasks, which end up mostly living on my calendar, or personal reflection, which I still do mostly by hand. Sometimes I even give into the lure of fancier bullet journaling. 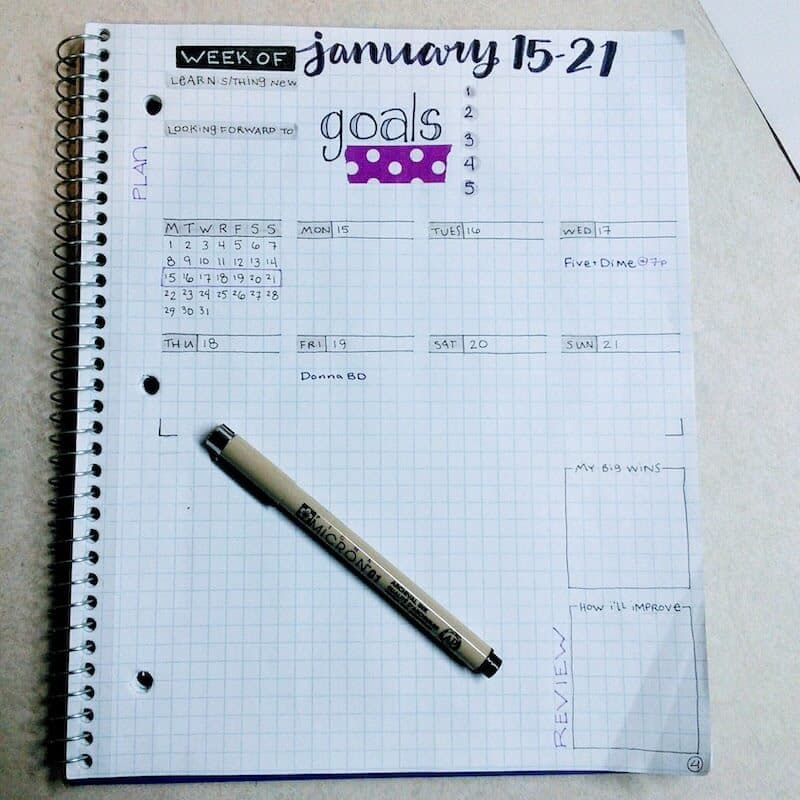 While I’ve started up a pen-and-paper (and markers! and washi tape! and stamps!) bullet journal on several occasions, I’ve never kept it going longer than three months and certainly not three years. I hope the longevity of me maintaining and getting benefit out of LFTM inspires you to check it out to, if organization is something you struggle with.

I’ve made a fork of Coraline’s template, which you can use to further explore my changes or can click “Use This Template” to create a version for your own use.

HTML Tricks Nobody Tells You

Tools I use everyday as a senior web developer 🔧

Top 5 Most Popular Backend Framework for 2022

Everything about Programming, in One Place

Angelique
solving problems while writing smarter code + teaching others to do the same // pronouns: she/hers
Helpful accessibility resources for all
#gaad #a11y #resources