Log transformations turn out to be very useful when working with linear regression models. They are very helpful in correcting skewness in the data, and allow to make the distribution more normal.

Alexander Bailey and I worked on a dataset of housing prices in King County in order to develop a linear regression model that explains price variations.

Let’s look at one of the variables: distance in miles from downtown Seattle. This is how the distribution looked before and after the log transformation: 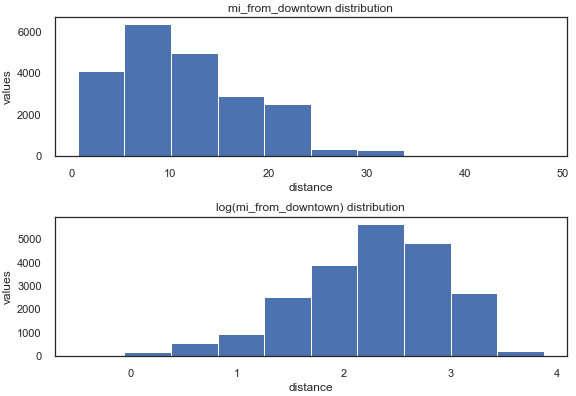 We can see that the log transformation corrected the skewness and made the distribution more normal, which was beneficial for linear regression model performance. By taking the natural logarithm of parameter values, we were able to improve our model’s metrics: R squared from 0.627 to 0.686 and MAE from 134016.02 to 131342.48 in one of model fitting iterations.

In case of the distance from downtown Bellevue, the distribution was also significantly improved by taking the natural logarithm of the variable values: 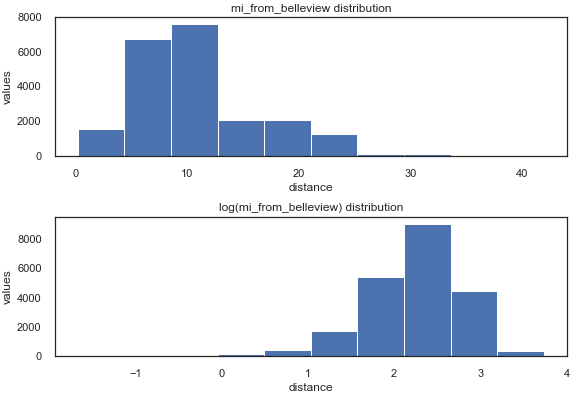 Change in distribution after log-transformation of the distance from South Lake Union parameter: 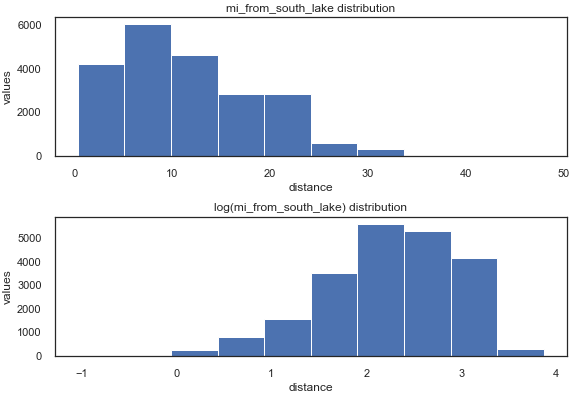 Our final model for the housing prices focuses on making predictions for the prices up to approximately $1.1 million. Distance from downtown Seattle, downtown Bellevue, and South Lake Union are among the strongest predictors of the price.

Here are the coefficients for the distance values in our model:

The general explanation of the coefficient values is that, an increase in one unit of the 'mi_from_downtown_log' variable, assuming other variables in the model remain constants, would result in an increase on the housing price by $210,431.84 on average. However, the difficulty is that the explaining variable was log-transformed.

Let’s simulate how the increase of the distance in miles from downtown Seattle would affect housing prices, assuming that other variables are constant.

First, let’s generate an array of numbers from 1 to 100, representing an increase of distance from downtown Seattle. Next step is to take the log value of these numbers that resulted in an array in range from 0 to 1.6. We then calculate y values (that is, our predicted price) for each of the values of log(x) using the coefficient of 210,431.84 from our linear regression model. 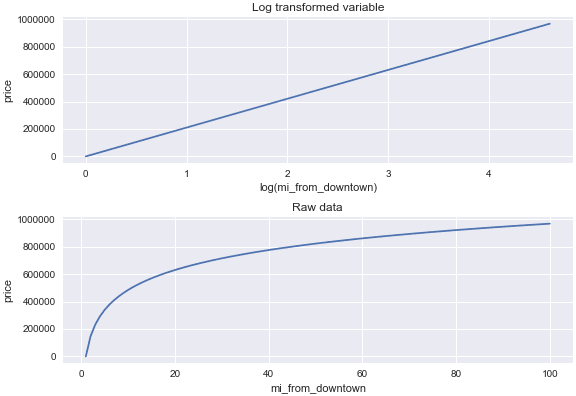 We can see that log-transforming this variable converted the relationship from exponential to linear, which serves the purpose of improving metrics of the linear regression.

Plotting the log(x) and x vs y: 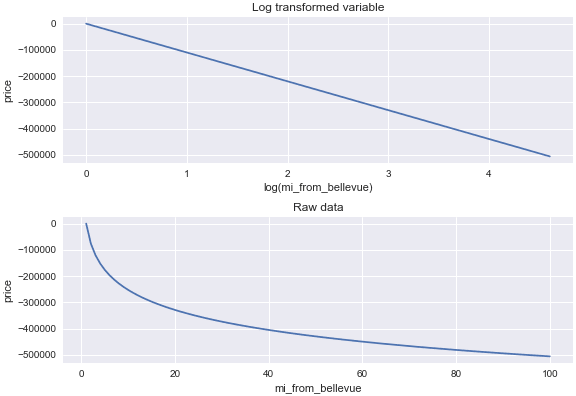 Here the relationship is more logical: the further away a house is from Bellevue, the lower will be its price.

The coefficient for this parameter is -294919.77, which is the most significant between all three distance parameters.

Calculating an array with y values:

Visualization of the x and log(x) vs y: 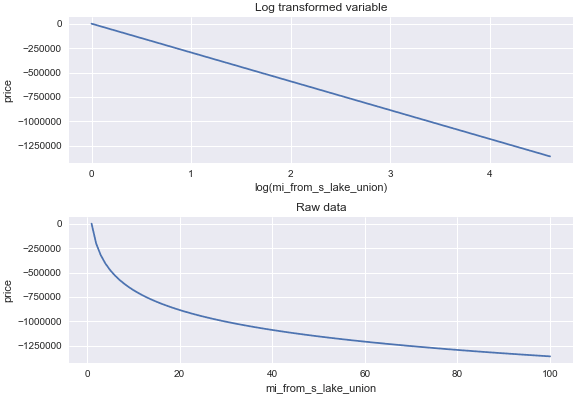 When log transformations are done on a dataset, it can be difficult to explain to the non-technical audience how the model works. Here is how it can be done using our model example.

However, the values of the price are log-transformed, so we can’t use this 1-unit-increase technique. In the case of logarithmic data transformations, we can talk about percentage changes.

To find out what the increase in target price would be, let’s look at the equation:

So in our case to find out what would be the change of price resulting from an increase of the distance by 10%, we will have to calculate the following:

Based on the above calculation, with an approximately every 530 ft (10% of a mile) increase in distance from South Lake Union, the price will decrease by $28,108.85.

If we want to know the effect of increasing the distance by 1 mile, we would need to do the following calculation: