I have always had a strong interest in making small libraries that could facilitate the life of a developer. The most useful libraries are those that allow you to solve recurring problems ( possibly without creating others :) )

For this purpose, some time ago, I created a library that would allow me to generate SQL code from the definition of classes that represented my entity data model. It is not an ORM (complete or micro) but a simple generator of SQL code.

I know that there are already many excellent solutions around, but for me, it was an opportunity to analyze an interesting problem and at the same time have full control of the SQL code that I wanted to generate.

The final result is the following:

In order to generate the SQL code, I added metadata (by custom attribute) to the classes of the domain model, below an example:

The main classes of the library are SQLStatementBuilder and EntityInfo.
The first generates the SQL code by reading the metadata via reflection, which is a very expensive operation in terms of speed, for this reason, it maintains an EntityInfo dictionary for each entity whose metadata it has read.

EntityInfo retains metadata information and It is created on first access to the entity, from the second access on it will no longer be necessary to use reflection. 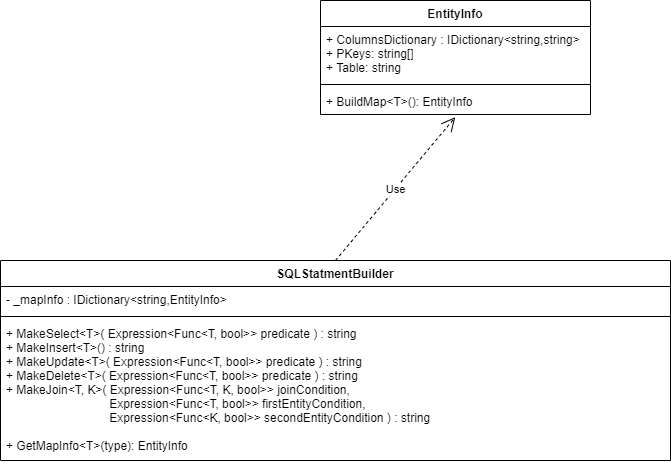 The code of the entire project is available on

Any advice is welcome.

The best alternative to the console.log statement

DEV is participating in the MLH Fellowship, Powered by GitHub

Why YOU Should Contribute To Open-Source

Antonio Di Motta
Web addicted, passionate about cloud, mobile, running and MOBA games.
Getting employed as a self-taught developer with no degree, no experience, and no investment!
#firstyearincode #career #javascript #beginners
What is an analogy or visualization of a coding concept that really helped you understand it better?
#discuss #podcast
How I became a senior javascript developer with personal projects
#javascript #career #opensource