The Picture-in-Picture API is a new Web platform API that allows websites to play videos in a little floating window that stays on top of other windows even when the browser is not visible, allowing us to continue watching these videos while we interact with other websites or applications.

The API is currently limited to video elements only. Fortunately, we can also create video streams from canvas elements. This means that we can draw anything on a canvas and have it appear on a Picture-in-Picture window. Experimenting with this eventually led me into trying to make Chrome's offline T-Rex runner game playable inside a Picture-in-Picture window (click here to play it now). 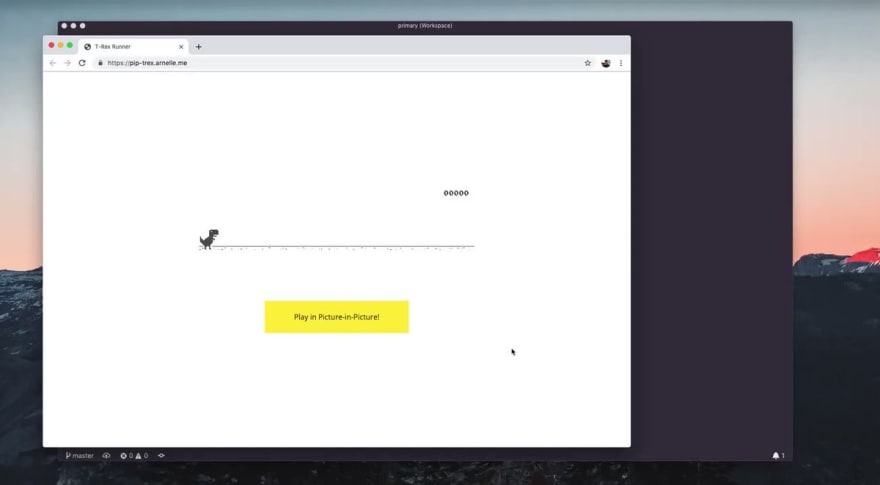 (Use play/pause media buttons on keyboard, headphones, etc. to jump! 🔥)

Get the game's source code

We can get the game's source code from the Chromium repository. We copy the contents in that location, rename some of the files, and clean up the HTML to only contain this necessary markup inside the <body>:

This gives us an exact replica of the offline T-Rex runner game which we can already play with: 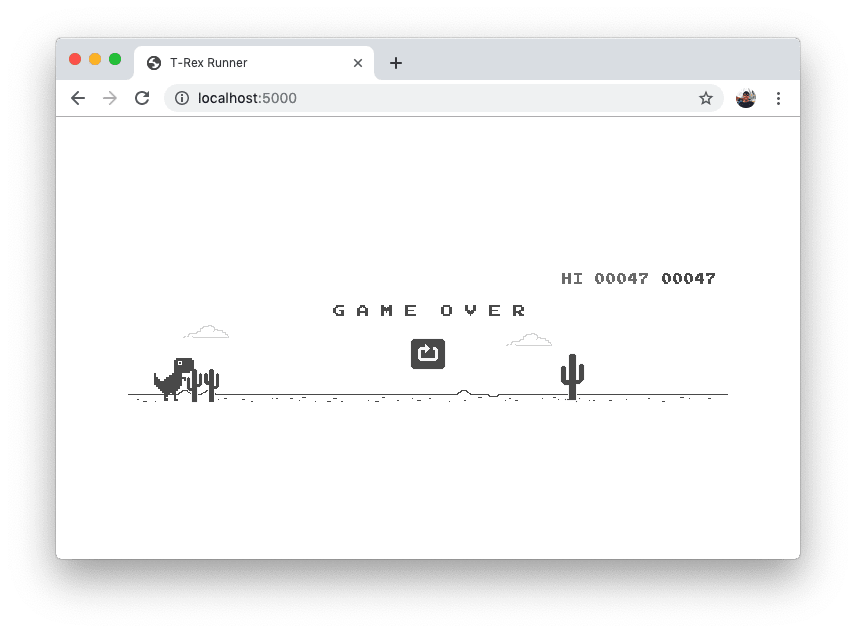 The T-Rex jumps every time we press on the spacebar. Let's add a way to programatically make our T-Rex jump without us having to actually press the spacebar.

Digging through the game's code, we will find two methods on the runner object that handles the spacebar key:

Let's write a method that calls either of these based on the state of the game, passing in a dummy keyboard event.

Calling new Runner('...') creates a canvas element and inserts it into the page. We need to get a reference to that canvas element, and then capture its contents as a video stream:

We then create a video element with the video stream as the source:

Here we're also muting the video so we can autoplay it (see Chrome's autoplay policy).

When using new Web APIs like Picture-in-Picture, always feature-detect if they are available before trying to use them. This makes sure that our apps don't break when the API is not available, and only progressively enhance the experience when it is available. For Picture-in-Picture, it can be done by checking the document.pictureInPictureEnabled property:

Now to the fun part, let's show our video stream in the Picture-in-Picture window when the button is clicked!

The Picture-in-Picture window can stay on top of other application windows, and in that case we won't be able to press the spacebar key on the page to make the T-Rex jump, so we need another way to make it do that.

Media Session API to the rescue!

The Media Session API allows websites to customize media notifications, as well as define event handlers for playback controls (e.g. play, pause, etc.). We can make our T-Rex jump whenever we press the play/pause buttons on our keyboards (or other devices that can control media playback) by defining play and pause event handlers.

With all of those changes in place, we've now made the T-Rex Runner game
playable inside a Picture-in-Picture window, using our play/pause media buttons to make the T-Rex jump!

You can find the live demo of this project, as well as the complete source code, in the following links:

If you've built / are currently working on something that uses these APIs, or see some really amazing uses of them in the wild, please share them with us in the comments, I'd love to hear about them!

Once suspended, arnellebalane will not be able to comment or publish posts until their suspension is removed.

Once unsuspended, arnellebalane will be able to comment and publish posts again.

Once unpublished, all posts by arnellebalane will become hidden and only accessible to themselves.

If arnellebalane is not suspended, they can still re-publish their posts from their dashboard.