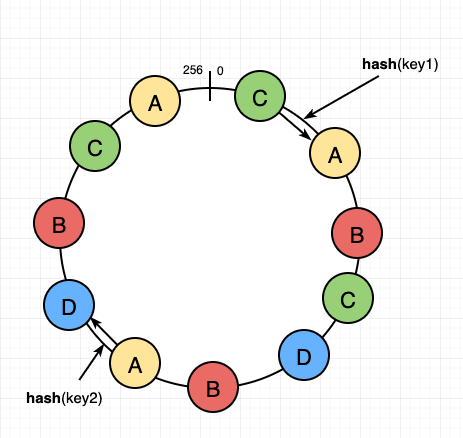 While designing a scalable system, one of the most important aspects is defining how the data will be partitioned and replicated across servers.

Let's first define partitioning and replication so that we are on the same page.

Data partition and replication strategies lie at the core of any distributed system. A carefully designed scheme for partitioning and replicating the data enhances the performance, availability, and reliability of the system and also defines how efficiently the system will be scaled and managed.

What is data partitioning?

As stated above, the act of distributing data across a set of nodes is called data partitioning. There are two challenges when we try to distribute data:

A naive approach will use a suitable hash function to map the data key to a number. Then, find the server by applying modulo on this number and the total number of servers. For example: 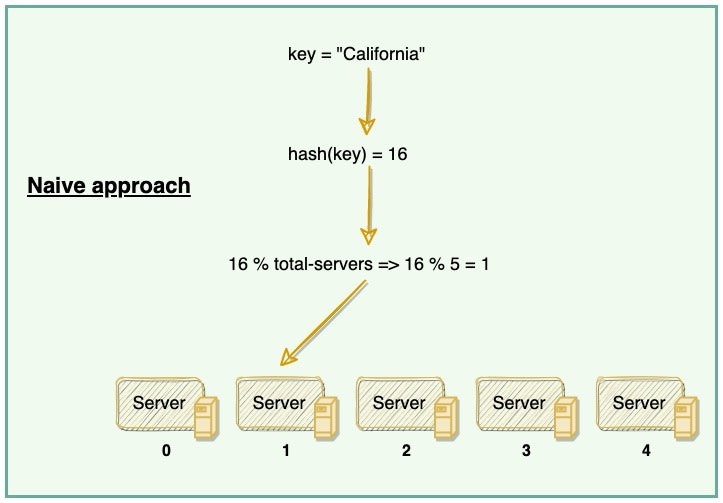 The scheme described in the above diagram solves the problem of finding a server for storing/retrieving the data. But when we add or remove a server, all our existing mappings will be broken. This is because the total number of servers will be changed, which was used to find the actual server storing the data. So to get things working again, we have to remap all the keys and move our data based on the new server count, which will be a complete mess!

Consistent Hashing to the rescue

Consistent Hashing stores the data managed by a distributed system in a ring. Each node in the ring is assigned a range of data. Here is an example of the consistent hash ring: 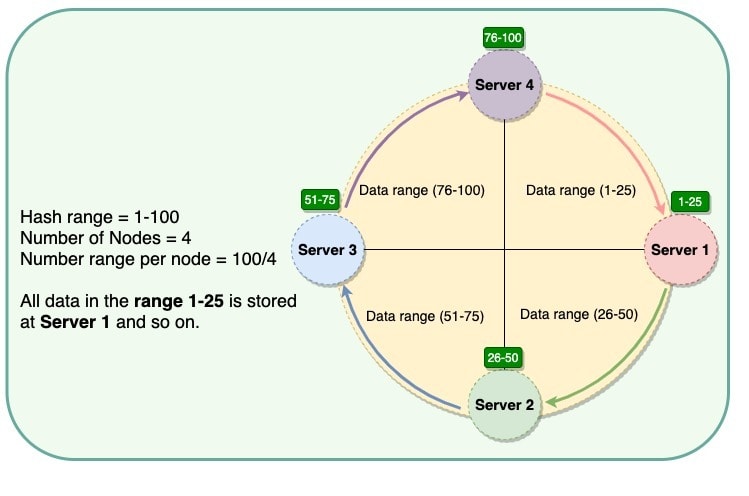 With consistent hashing, the ring is divided into smaller, predefined ranges. Each node is assigned one of these ranges. The start of the range is called a token. This means that each node will be assigned one token. The range assigned to each node is computed as follows:

Here are the tokens and data ranges of the four nodes described in the above diagram: 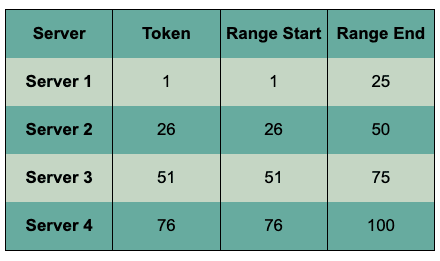 Whenever the system needs to read or write data, the first step it performs is to apply the MD5 hashing algorithm to the key. The output of this hashing algorithm determines within which range the data lies and hence, on which node the data will be stored.

The MD5 (aka MD5 Message-Digest Algorithm) is a hashing function that accepts a message of any length as input and returns as output a fixed-length digest value.

As we saw above, each node is supposed to store data for a fixed range. Thus, the hash generated from the key tells us the node where the data will be stored.

The Consistent Hashing scheme described above works great when a node is added or removed from the ring, as in these cases, since only the next node is affected. For example, when a node is removed, the next node becomes responsible for all of the keys stored on the outgoing node. However, this scheme can result in non-uniform data and load distribution. This problem can be solved with the help of Virtual nodes.

Adding and removing nodes in any distributed system is quite common. Existing nodes can die and may need to be decommissioned. Similarly, new nodes may be added to an existing cluster to meet growing demands. To efficiently handle these scenarios, Consistent Hashing makes use of virtual nodes (or Vnodes).

As we saw above, the basic Consistent Hashing algorithm assigns a single token (or a consecutive hash range) to each physical node. This was a static division of ranges that requires calculating tokens based on a given number of nodes. This scheme made adding or replacing a node an expensive operation, as, in this case, we would like to rebalance and distribute the data to all other nodes, resulting in moving a lot of data. Here are a few potential issues associated with a manual and fixed division of the ranges:

To handle these issues, Consistent Hashing introduces a new scheme of distributing the tokens to physical nodes. Instead of assigning a single token to a node, the hash range is divided into multiple smaller ranges, and each physical node is assigned several of these smaller ranges. Each of these subranges is considered a Vnode. With Vnodes, instead of a node being responsible for just one token, it is responsible for many tokens (or subranges). 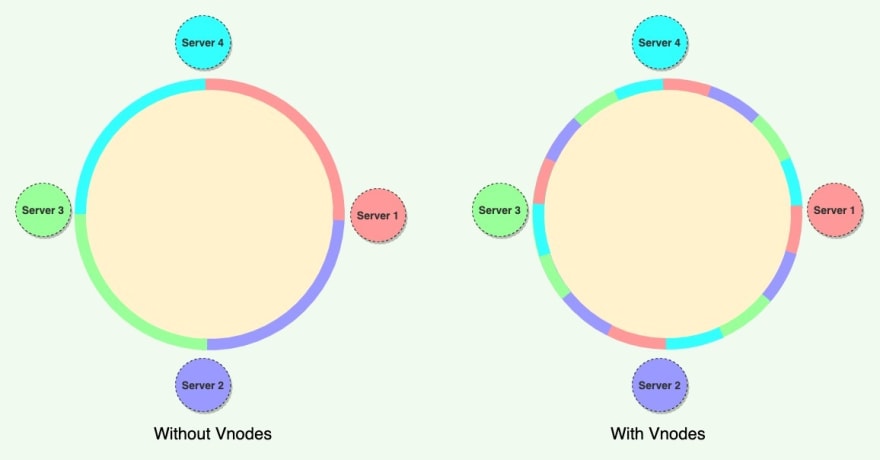 Practically, Vnodes are randomly distributed across the cluster and are generally non-contiguous so that no two neighboring Vnodes are assigned to the same physical node or rack. Additionally, nodes do carry replicas of other nodes for fault tolerance. Also, since there can be heterogeneous machines in the clusters, some servers might hold more Vnodes than others. The figure below shows how physical nodes A, B, C, D, & E use Vnodes of the Consistent Hash ring. Each physical node is assigned a set of Vnodes and each Vnode is replicated once. 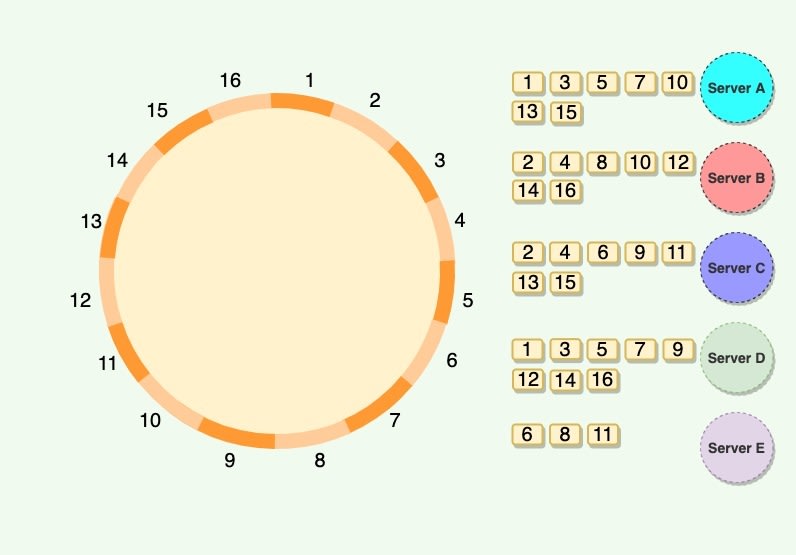 To ensure highly available and durability, Consistent Hashing replicates each data item on multiple N nodes in the system where the value N is equivalent to the replication factor.

Each key is assigned to a coordinator node (generally the first node that falls in the hash range), which first stores the data locally and then replicates it to 'N-1' clockwise successor nodes on the ring. This results in each node owning the region on the ring between it and its 'Nth' predecessor. In an eventually consistent system, this replication is done asynchronously (in the background).

In eventually consistent systems, copies of data don't always have to be identical as long as they are designed to eventually become consistent. In distributed systems, eventual consistency is used to achieve high availability. 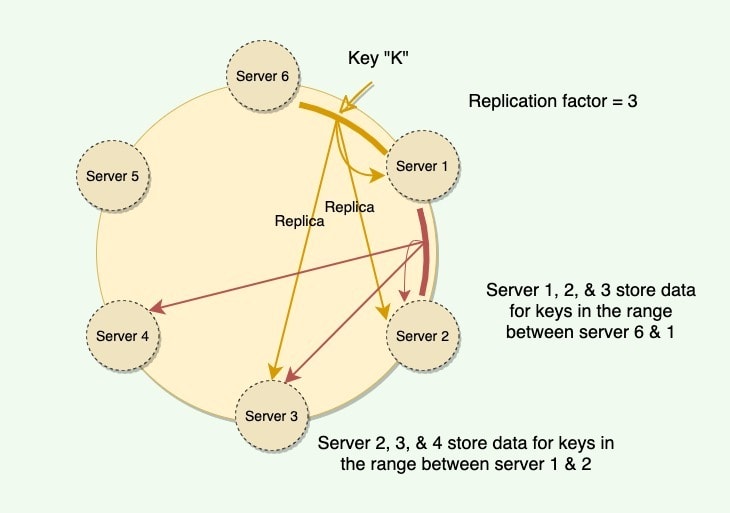 As we saw above, Consistent Hashing helps with efficiently partitioning and replicating data; therefore, any distributed system that needs to scale up or down or wants to achieve high availability through data replication can utilize Consistent Hashing. A few such examples could be:

Amazon’s Dynamo and Apache Cassandra use Consistent Hashing to distribute and replicate data across nodes.

Have a look at Grokking the Advanced System Design Interview for some good examples of how distributed systems use Consistent Hashing.

Check Design Gurus for some good courses on Programming and System Design interviews.

So, You Want to Get a Job as a React Developer (Here Are 4 Not-So-Obvious Ways to Land It)