My Experience as a first time speaker in a test automation conference and the awesome talks and tools that I learned about.

Appium Conf had its 2nd edition in the garden city of india between 13–15 June 2019 and had an impressive lineup of speakers from all across the world with so many cool things to share with the community. This post is a summary of what sessions I personally attended and what i learned from them, as well as an inside track into how it felt to deliver my first ever conference talk.

With that set, Let’s jump right in.

With three parallel tracks set, It was impossible to attend all of them so I selected my schedule based on the topics or speakers who had a higher calling to me personally. The ConfEngine app has this sweet web/mobile app to allow you to see what sessions are playing right now as well as the ones you want to attend and add them as a calendar invite so sniffing through them was pain at all.

Also all of these sessions were being recorded so I am glad that we can go back in time and listen to the wealth of information in them. 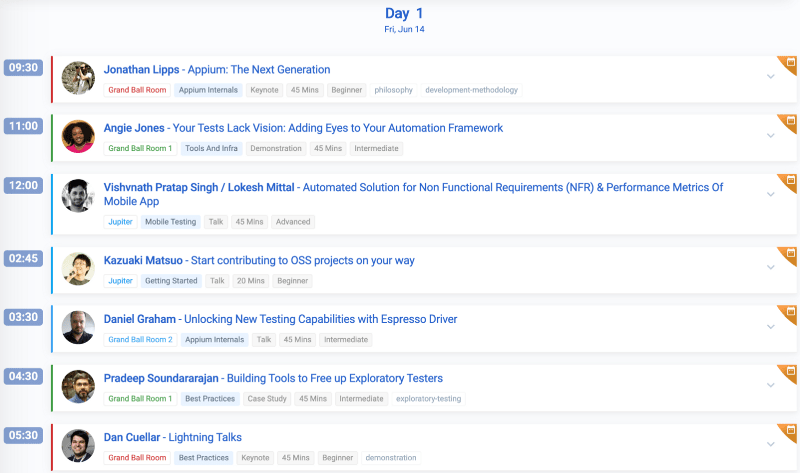 Jonathan Lipps — Appium: The Next Generation

Video is already out. But apart from the plans to make appium more pluggable and vision to ensure it keeps up with changes in mobile tech. The best highlight of this keynote was when Jonathan showed off an Appium driver for raspberry Pi and how he could use it to play a live drum sequence. Checkout the code here.

Angie Jones live demoed how to use Applitools to add additional intelligence to the UI tests and how easy it is to control what level of granularity you want in your verifications. To beat it all off, while the appium test was running she had super cool beats to listen to.

Also she is an awesome person to hang out and talk to in person. She contributes to the community a lot as part of her role as Test Advocate and Director of Test Automation University which is a community driven site to host test automation courses at Applitools

Pleasure to meet @techgirl1908 in person! Getting to meet such amazing leaders in the test automation space is just great! #AppiumConf @appium_conf pic.twitter.com/8isuwSdM63

Woah! This was quite a technical talk and the speakers provided a glimpse into how they are using Espresso/whole suite of other tech to gather perf metrics. Here are the slides and this is definitely a video to watch out for.

Gaurav Singh — How to kill test flake in Appium? 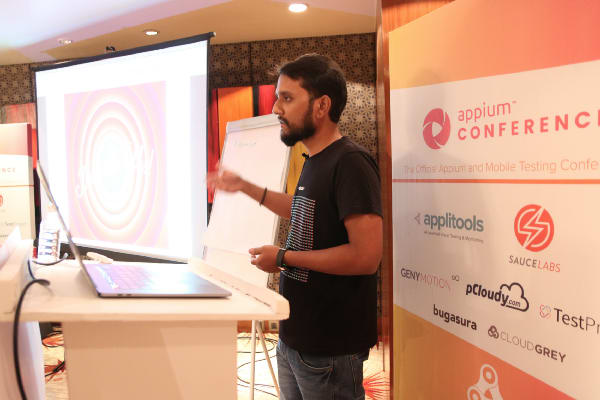 Well, Had to attend this one since I was the one giving it.

I aimed to give a set of strategies that engineers can follow to ensure they are able to reduce test flakiness to a minimum and this was heavily if not all inspired by a series of articles written on appium pro by Appium Team and other webinars given by Jonathan. Giving this talk was a really good exercise in public speaking and not only did I learn a lot, I realized that I could actually talk in front of people and convey an idea. Looking forward to helping the community out in future talks as well. Here are the slides in case you want to check it out.

Oh Oh! Did i mention catching up to Jonathan was a highlight of this conference for me.

His keynote ending with a live drum session by a device with appium server running on rasberry pi was uber cool. pic.twitter.com/4AF7ueuxHt

Great talk by Dan in which he explained how much of espresso’s capabilities can be easily leveraged in appium and this support is only gonna grow better. His explanation of how espresso works and examples on Idling resource were really helpful.

Boy is pradeep a gem of a person to talk to. He spoke a lot about the theory behind testing and shared stories around his years of experience solving pains felt by him as a tester in different companies. The key takeaway for me was really to not be limited by the problem space but think of how we can create tools/utilities to make our life as a tester so much easier.

The day ended for me with a set of amazing lightning talks which were organized and managed by none other than Dan Cuellar the creator of appium itself and they were too good. Would be waiting for this video to come out. 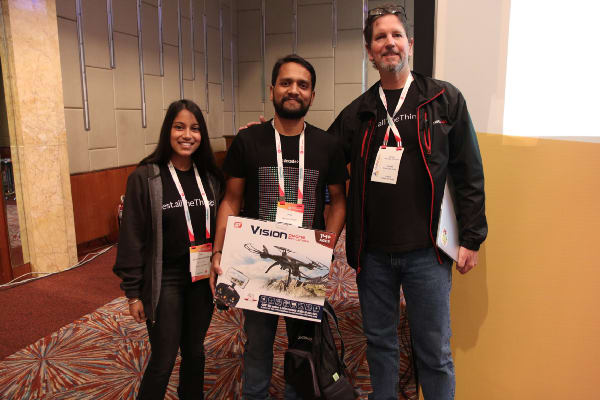 To top off the day. I won a lucky draw to get a vision drone as part of goodies given away by Sauce Labs. The day couldn’t have ended on a better note:

Wow. Just won Vision drone as part of Sauce Labs goodies give away. I guess today is my lucky day. Thanks a bunch! @saucelabs @appium_conf #AppiumConf pic.twitter.com/drOitBthgF

It’s not everyday that you get to hear from the creator to Selenium, Founder of Sauce Labs and Tapster in person and this was this one of the highlights of this conference for me. He talked about how his company Tapster robotics is building robots to perform automation for different use cases and this was super cool.

Jason also live demoed use of IOS 13 mouse actions with a Appium driver running on arduino to show off a test on Angry bird app! All live!. That was the second IOT driver during this conference done in such a short span of time.

Woah! Using an appium driver on arduino to use IOS 13 mouse actions. @hugs This @appium_conf is too cool. #AppiumConf pic.twitter.com/mBEPjUY3Tp

Chatting up with him in person was a dream come true. He is such an accomplished individual and gem of a person to speak to and hearing a lot of the history of the selenium project from him directly was incredible.

Had a fanboy moment meeting and talking to @hugs. Really interesting conversation!

Excited to be speaking @appium_conf on How to kill test flake in appium. Don't be shy! Come say Hi during the conference tomorrow. #AppiumConf pic.twitter.com/iOAl2k6wtI

Justin shared how he build an app crawler to walk through an app and figure out if the app was not localized properly. To beat that it is all open source and available on GitHub

Diego Molina — Building a Mobile Testing Infrastructure: What I Learned

I had listened to an earlier test talks podcast episode in which diego spoke about Zalenium and he lot of practical tips to share on how to setup and build a mobile infrastructure. Highlight being the depth in which he discussed the stack and the tools/tech used and the pragmatism of it all.

Here are some tools he mentioned:

Boy this was my favourite talk in all of appium conf. Jonah in a 90 mins talk walked through around 180 appium desired capabilities and even demoed how he goes about finding what each one of them does all while keeping the talk incredibly funny. He also setup caps.cloudgrey.io to host all of these tagged with different levels of complexity and am sure this would be an awesome community resource going forward.

My exact sentiment with this talk was:

What an awesome memory Jonah has. Give that man a medal!

And that was a wrap of Appium Conf for me.

Overall this a very positive experience for me and a big shout out goes to the amazing people inprogram committee, the sponsors who paid

, the speakers and overall the attendees for making this event just amazing. I would be sure to check out the videos when they come out and looking forward to a future conference.

If you find this article useful or informative in any way, why not share it with a friend or colleague.

See you all in another future post! Until then, Happy testing and coding! Cheers!

Agiloo | Made with Vue JS

Made with Javascript - May 16