This week, I am going to talk about how we can make use of attestation document generated by Nitro Secure Module (NSM).

AWS Nitro Enclaves is an isolated compute environments that can securely process highly sensitive data. When communicating with other components outside the enclave (e.g. Central secret store), we also want this process as secure as possible. The 2 main concerns are:

To tackle the issue, AWS Nitro Enclaves provides an attestation mechanism, its detail is provided in AWS documentation. But to understand it more easily, I created a Python demo for you to have a hands-on experience.
richardfan1126/nitro-enclave-python-demo

However, for simplicity, the demo would not perform any process on the secret as it is not our focus. It would just pass the secret plaintext to the client. 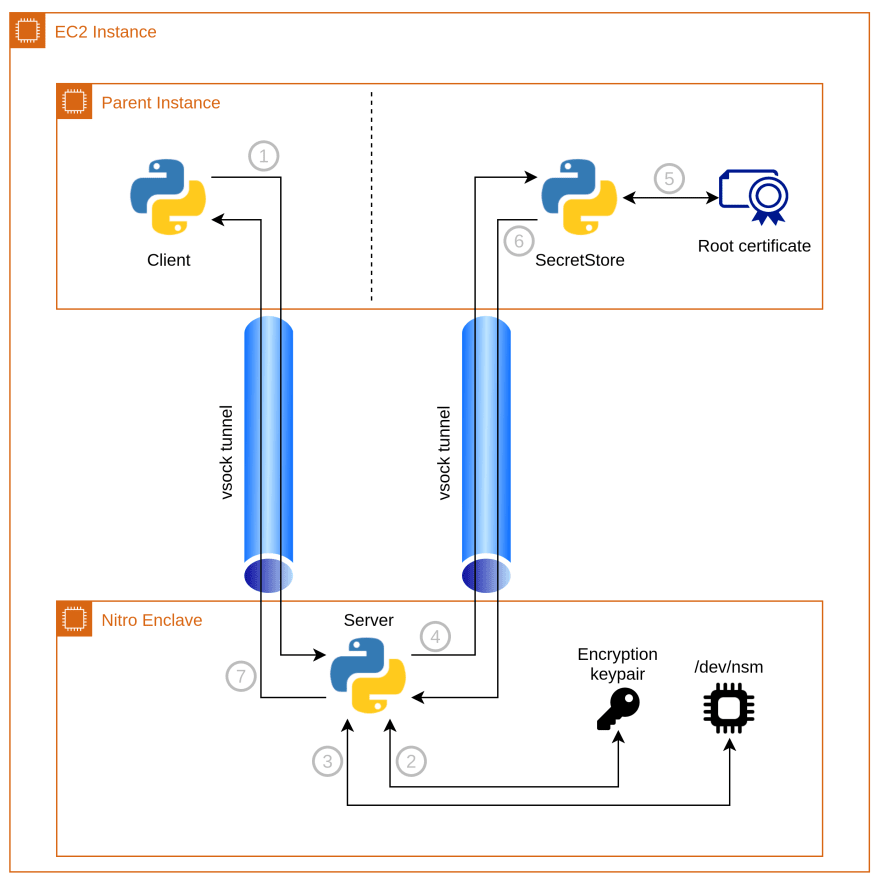 The user first runs the client app and send the request to the server app. This part is as simple as sending a JSON string through the vsock channel

When we start the server app, it will generate a random RSA keypair. The public key will be sent over to the SecretStore on every request. It is used to encrypt responses from the SecretStore to the Server so that only the Server can decrypt and get the actual content.

To generate a random key, most software relies on/dev/urandom to generate random values. This feature is not available inside AWS Nitro Enclaves, but luckily, Luc van Donkersgoed solved this issue in his NitroPepper project by instructing Crypto python package to use the random value generator provided by the NSM. You can read his blog post for more detail.

The attestation document is generated by the NSM, AWS has already implemented an SDK (written in Rust) to perform the request. Again, thanks to Luc van Donkersgoed, he has modified the code and makes it usable in Python.

The attestation document has an optional field public_key for the consumer to encrypt data with. In our case, we will put the public key generated in step 2 into this field (through the 2nd parameter of nsm_get_attestation_doc), which will be used by the SecretStore. 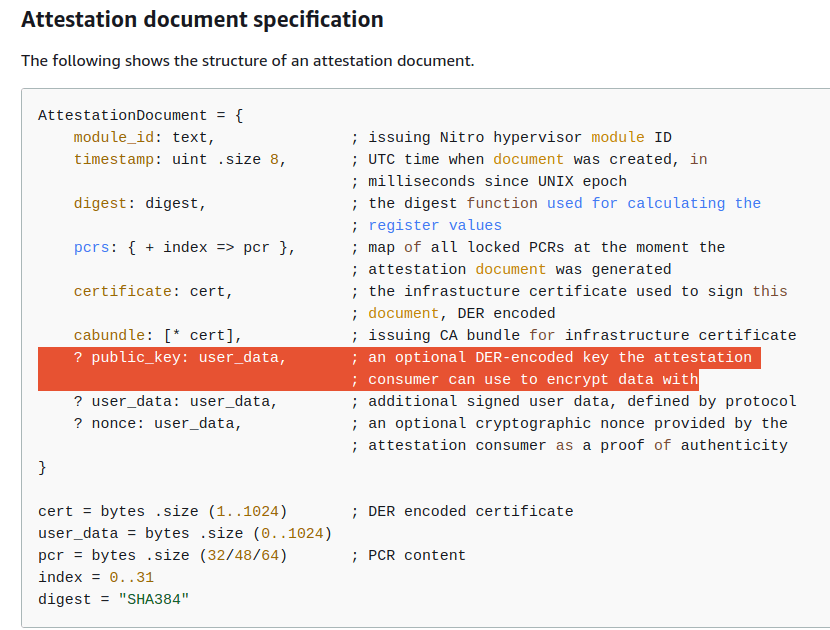 There is an optional field public_key in the attestation document

The attestation document is encoded as Concise Binary Object Representation (CBOR), which is in binary data form. We will do a base64 encode so that we can put it inside the request payload.

4. Send the request to SecretStore

In our demo, because everything is inside the same instance, we are sending the request from Server to SecretStore purely through the vsock channel.

But in real life, the SecretStore is most likely sitting elsewhere. To make connections outside the instance and avoid in-transit data being read by attackers, I recommend using HTTPS. For how to make HTTPS connection from the enclave, you can follow my previous demo on http-proxy.

To validate the attestation document, we will do 3 things:

To get the attestation document, we need to decode the CBOR object and get the third value of the object. 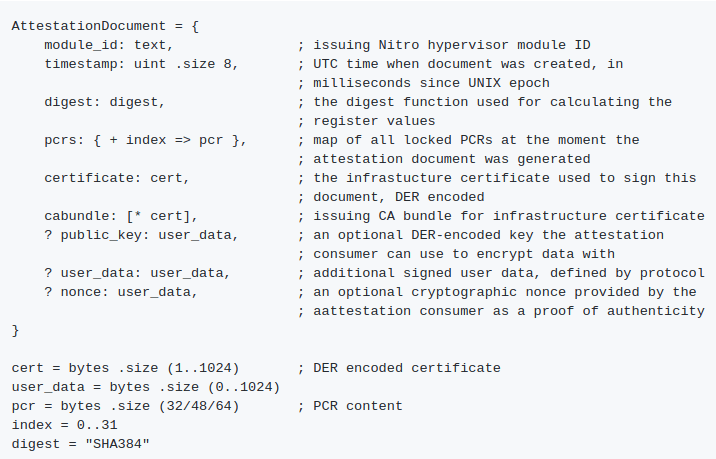 Structure of the attestation document

Then, we will get the PCRs values from the document, these values are the measurement of the enclaves.

After we built the server app enclave image, we can get the PCRs values of the image. We can check if the values inside the attestation document match them, to verify that the request is generated by the same enclave image.

For more detail on PCRs, please check the official documentation.

After matching the PCRs, we will verify the signature of the document.

The attestation document is in COSE Sign1 format and signed by a certificate. We can get that certificate from certificate field of the document.

AWS Nitro Enclaves uses ES384 algorithm to sign the document. To verify the signature, we will create an EC2 key by the parameter of the certificate’s public key (i.e. x/y coordinate and curve).

After constructing the key, we will construct the Sign1 message from the received data, and verify against the EC2 key.

The last part of the validation is to verify the certificate itself.

Because we are verifying the signature using the certificate provided in the same document. We need to ensure the certificate itself is valid but not issued by other parties (probably a self-signed certificate by attackers).

To do this, we will verify if the CA bundle provided is signed by the CA root certificate of the AWS Nitro Attestation Public Key Infrastructure (PKI).

The root certificate can be found in AWS documentation.

6. Encrypt the secret and send back to the enclave

Before sending back the secret to the enclave, we will encrypt it using the server app’s public key. The key is generated when we start the enclave server app and sent inside the attestation document.

By doing that, we can ensure only the server app can read the secret even though the message is captured by other parties. This is very important because the Nitro Enclave doesn’t have direct network access, the connection between SecretStore and the enclave is most likely going through the EC2 instance, which we don’t want them to read it.

We use the same method as the previous step, decoding the CBOR object, to get the Server app’s public key. Then we use PKCS1_OAEP to encrypt the secret, encode the ciphertext in base64 format, and send it back to the server app.

7. Decrypt the secret and perform business logic on it

After the server app receives SecretStore’s response, it uses its own private key to decrypt the secret. After that, we can perform the business logic on it, and send the result back to the client.

In this demo, we are not going to perform any business logic but directly send the secret back to the client.

The pattern shown in this demo is useful when we have static secrets that are frequently used. E.g.

Normally, we will keep those secrets inside a separate component. When requests come, it will be processed inside that central component. E.g. when user request SSO login, this request will be redirected to the authenticator, which has access to the SSO app secret.

But after using Nitro Enclaves, we can safely pass the app secret into the enclave and offload the authentication work to it, without exposing the app secret to the server admin.

Furthermore, because we have control of the entire process, we can customize and add business logic into the “SecretStore”, to make it more than just a store.

Getting Started with YOLTv4 for Object Detection in Imagery: Getting Training Data