Before I get to that, let’s do a simple exercise.

Which of these two serverful applications are more complex? 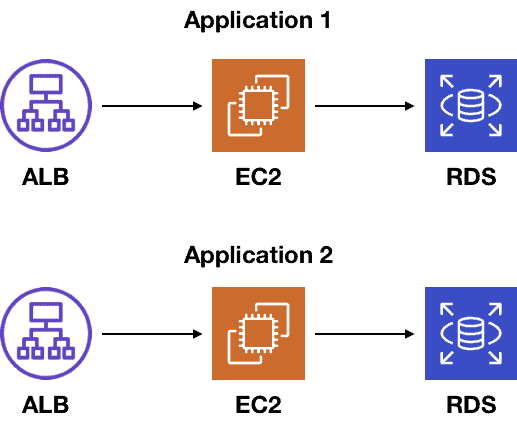 Pretty hard to tell, right? Since the architecture diagram alone doesn’t tell the full story. And those EC2 icons are really great at hiding all the complexities that are buried in your code.

What if we have a more honest representation of what these two applications actually look like. You know, by not omitting 90% of what is actually going on in these applications. 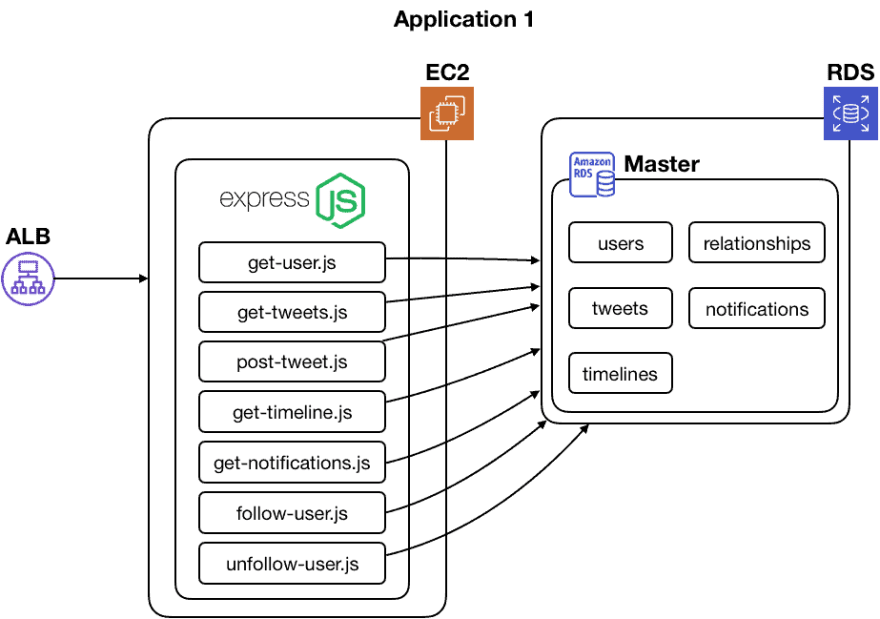 Suddenly, it’s clear to see that Application 1 is far more complex than Application 2. We have gained a better understanding of their true nature.

The architecture diagrams have become more complex, sure, but is that a bad thing in and of itself? It reveals important details about what your application, for what it actually is. Just because you omitted those database tables and handler modules previously, it didn’t mean they didn’t exist. It certainly didn’t mean you were immune to all the complexity and headache they would cause you. Ignorance is not bliss, not when you’re the one who has to support the application and has to wake up at 3am when the server goes down.

Speaking of servers going down. You don’t just run one server in production. If you follow AWS best practices, you will run your application in at least 2 availability zones.

And you definitely wouldn’t have just a single RDS instance. At the minimum, you will have a read-replica in case the master goes down. 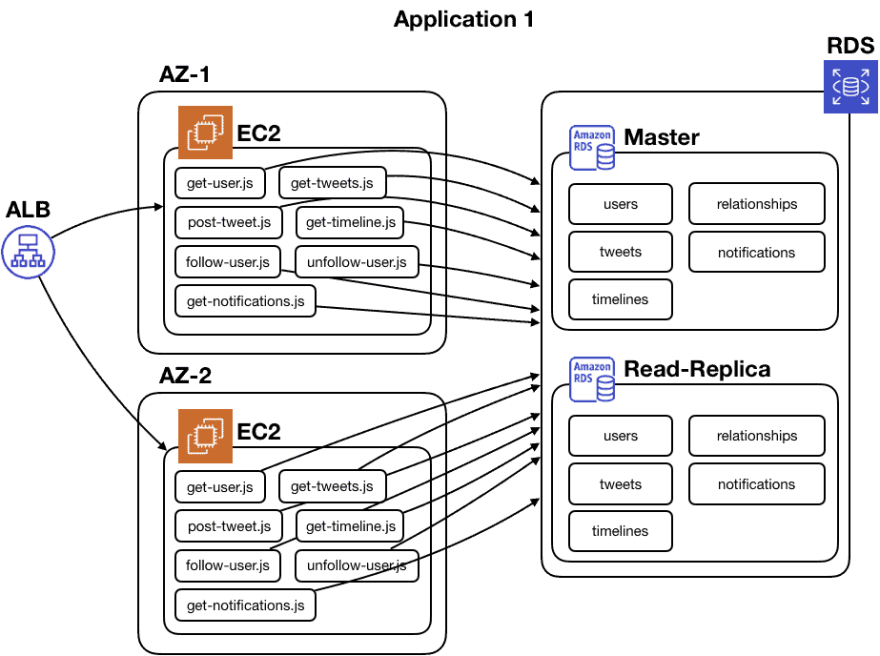 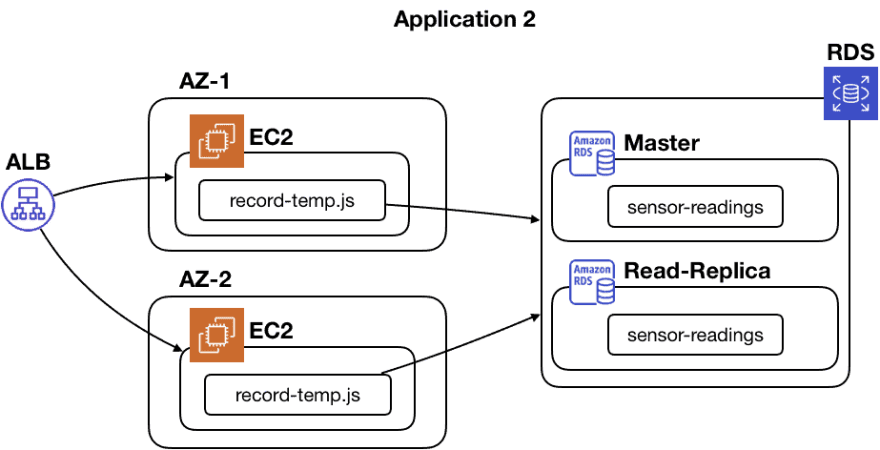 It’s starting to get a bit complicated once you don’t omitted some important implementation details, right?

What would an equivalent serverless application look like? Well, most likely you’ll have API Gateway, Lambda and DynamoDB. Of course, you can still use RDS with Lambda, but honestly, if DynamoDB is sufficient for your data access patterns then you should use DynamoDB instead. It’s just far easier to work with - no infrastructure to manage, and you get consistent and fast performance at any scale. 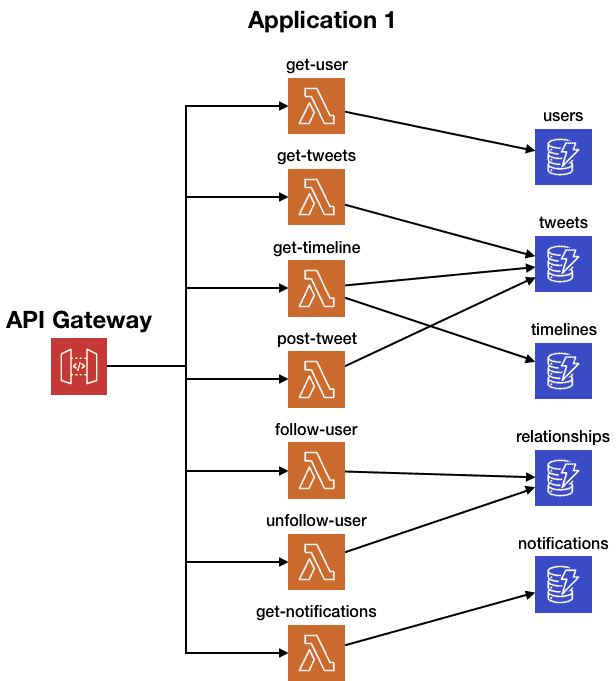 Wait, where are those multi-AZ boxes?

API Gateway, Lambda and DynamoDB all give you multi-AZ out-of-the-box, so it’s no longer your responsibility.

And what about all the other complexities that are not captured by an architecture diagram, but have to tackled nonetheless. You know, things like collection logs and metrics, patching the OS with security updates, configuring auto-scaling groups, working out how many reserved instances you should buy? And not to mention all the complexities that are in your CI/CD pipeline - how you package and deploy your code, how to do blue-green deployment to avoid deployment downtime, and so on.

Just because they aren’t captured in architecture diagrams, it doesn’t mean they don’t exist. In fact, I have been building applications on AWS for over 10 years and I easily spent 80% of my working hours dealing with infrastructure-related tasks before serverless.

For serverless application, these infrastructure concerns are either provided by the platform, or they have been drastically simplified. For example, to package and deploy my application with the Serverless framework, all I need is one command:

Lambda performs the traditional blue-green deployment out-of-the-box and automatically redirects incoming requests to new workers running my new code. The old workers are deprecated once they finish processing the requests that were already inflight.

When there’s a spike in traffic, Lambda auto-scales the no. of workers running my code, and I don’t have to wait for those extra resources when no one’s using my application. And as I mentioned before already, Lambda deploys my code to 3 availability zones by default.

And I don’t have to worry about a whole class of security vulnerabilities and attack vectors!

The infrastructure that is running my code is managed and secured by AWS. No one can just log on to the server running my code and snoop around. And the OS is constantly updated and patched with the latest security patches.

When Meltdown and Spectre were publicly disclosed, I spent a week patching all the docker images and AMIs at my previous company. All the while, our Lambda functions were patched on day 1 and we didn’t have to lift a finger.

And having more granular architectural components, I can also apply better security practices and limit the permissions of each function to just what it needs. In the event of a breach and an attacker is able to get into your AWS environment through your code (maybe through a compromised dependency, or a successful code injection attack), this limits the amount damages the attacker can cause. 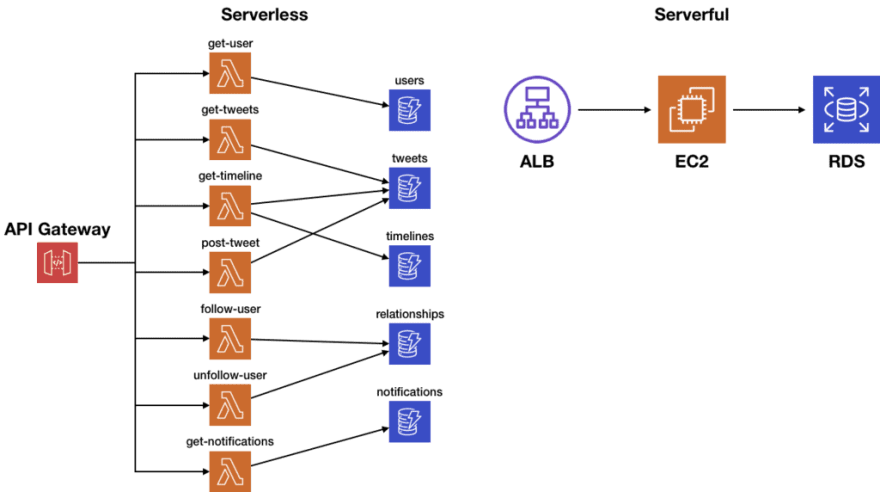 The argument that “even simple serverless applications have complex architecture diagrams” simplify reflect the fact that a lot of the hidden complexities in your application are revealed and surfaced to the top.

This is a good thing.

Because now, you can actually see the true complexity of your application, gain a better understanding of it, and make better architectural decisions because you’re armed with deeper and more accurate information about what your application is.

So what if the architecture diagram looks more complex, the application itself is simpler to build and maintain since you don’t have to worry about the underlying infrastructure that runs your code, and not to mention the deployment and operational models are simpler and far less demanding of your developers. All and all, serverless is a massive net win.

The post “Even simple serverless applications have complex architecture diagrams”, so what? appeared first on theburningmonk.com.