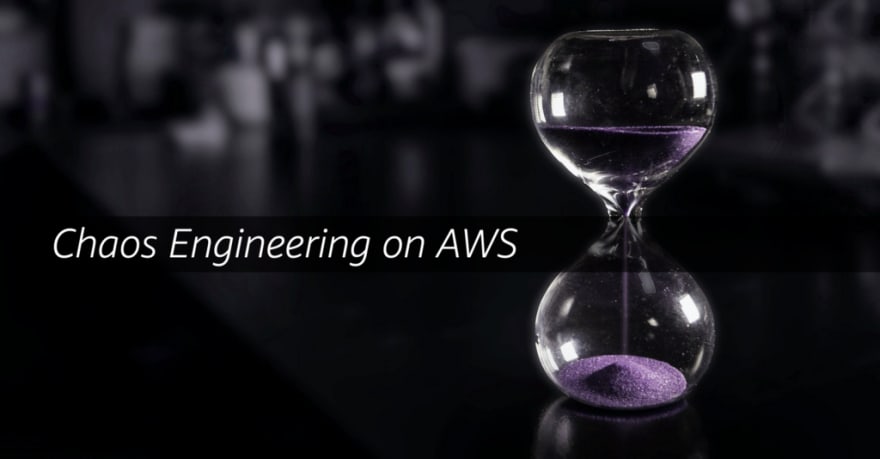 I’d like to express my gratitude to my colleagues and friends Jason Byrne and Matt Fitzgerald for their valuable feedback.

However, we need more than that. Failure injection should target resources, network characteristics and dependencies, applications, processes and service , and also the infrastructure.

We also need to have a broad set of controls and capabilities to perform chaos experiments safely. We might want to:

That is where AWS System Manager Automation (SSM** Automation) comes in. So, let’s take a look!

What is SSM Automation?

SSM Automation was launched to simplify frequent maintenance and deployment tasks of AWS resources and, especially, codify them.

SSM Automation uses documents (defined in YAML or JSON) to enable resource management across multiple accounts and AWS regions. You can execute AWS API calls as part of a document in combination with other SSM Automation actions such as running commands on your EC2 instances, invoking Lambda functions, and executing custom Python or Powershell scripts.

While these documents can be executed directly via the console, the CLI, and SDKs, you can also schedule and trigger them through CloudWatch Events. This scheduling capability makes the integration with CI/CD pipelines trivial.

Action types let you automate a wide variety of operations. For example, the aws:executeAwsApi action type used above enables you to run any API operation on any AWS service, including creating or deleting AWS resources, starting processes, triggering notifications, etc.

While SSM Automation supports a wide variety of actions, the most notable ones for chaos engineering are the following:

SSM Automation also includes safety and velocity features that help you control the execution and the roll-out of these documents across large groups of instances by using tags, limits, and error thresholds you define.

As you can probably guess by now, SSM Automation is also well-suited to execute chaos engineering experiments safely.

This experiment is famously known as Chaos Monkey, and was created by Netflix to enforce strong architectural guidelines; Applications launched on the AWS cloud must be stateless auto-scaled micro-services. That means that applications running Netflix should tolerate random EC2 instance failures.

Following is an SSM Automation document (described in YAML) randomly failing an EC2 instance in a particular AWS availability zone.

To open that SSM Automation document in your favorite IDE, click here.

Okay — so what do we have here?

Note: For readability purposes, I will now collapse irrelevant sections of the SSM Automation document.

The top section of this document is simple. It starts with a description , the schemaVersion (currently at 0.3 ), and assumeRole, which is the IAM role that SSM Automation needs to assume to run the actions defined below in the document. 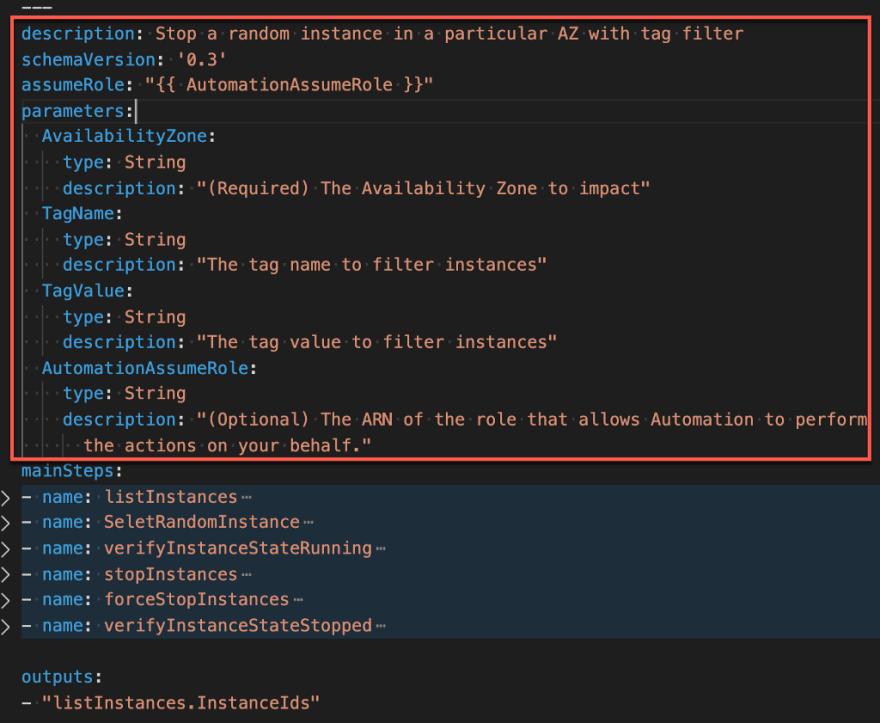 The parameters section —  AvailabilityZone , TagName , TagValue , and AutomationAssumeRole  — are parameters operators need to input for each experiment’s execution. The first three parameters are used in the first step  — ListInstances —  to filter EC2 instances, while the last one is the IAM role required to execute actions described in the document.

These parameters are inputs of the experiment execution, in bold in the below AWS CLI start-automation-execution command:

Each of these steps defines a single SSM Automation action type. The output from one step can be used as input in the following step.

Let’s take a look at the first step listInstances. This first step uses an action type aws:executeAwsApi to query the EC2 service for a list of instances filtered by availability-zone, the state of the EC2 instance, and its tags. 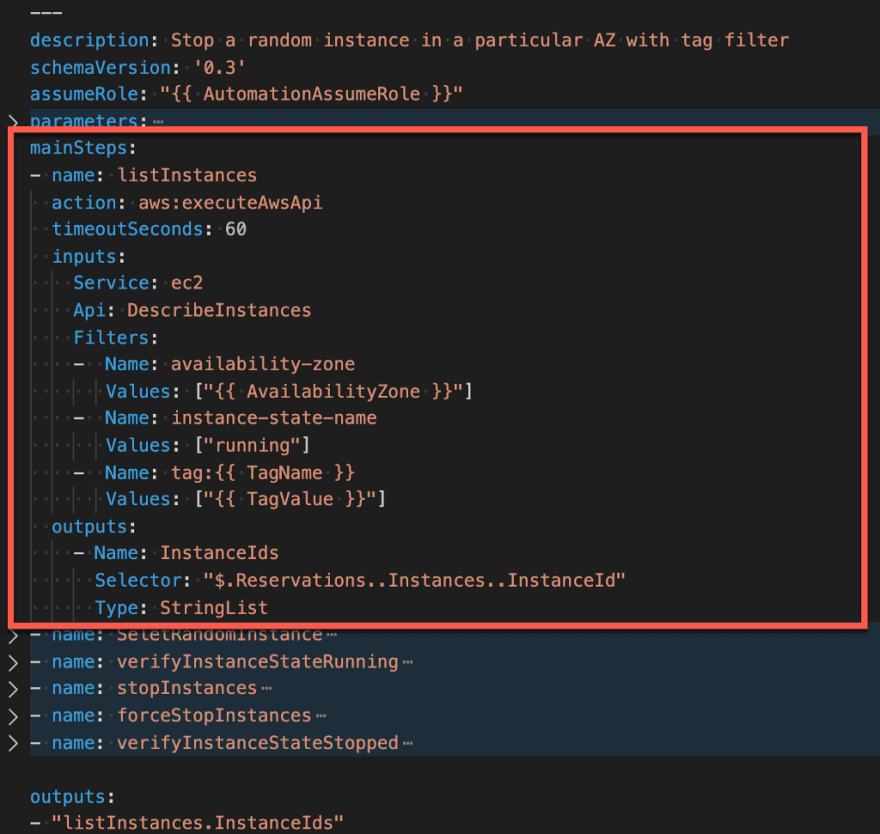 As explained earlier, the output from one step can be used as input in the following step. SSM Automation uses a JSONPath expression in the selector to help select the proper output. 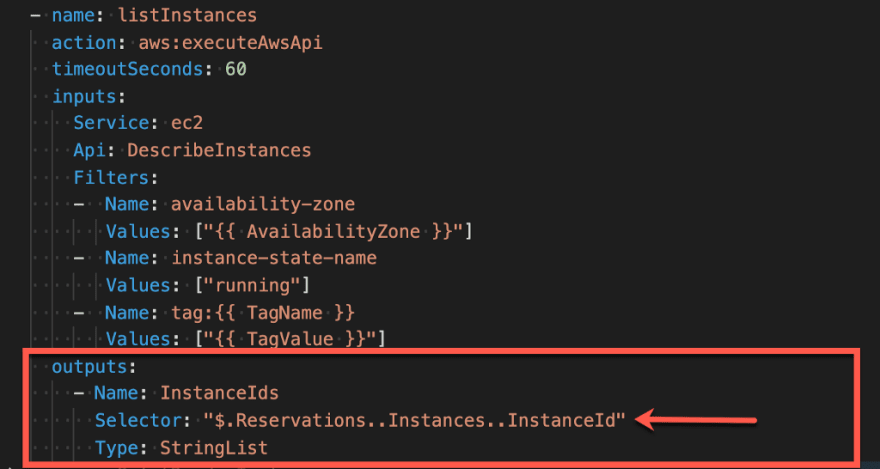 A JSONPath expression is a string beginning with “$.” used to select one or more components within a JSON element (e.g., the output of the DescribeInstances API call). The JSONPath operators that are supported by SSM Automation are:

In this first step, the output “$.Reservations..Instances..InstanceId” returns a list of InstanceIds filtered by availability-zone, state, and tag.

The second step of the document uses an action type aws:executeScript that execute an inline Python script, which returns a random InstanceId from a list of InstanceIds.

Note: The function defined in the handler must have two parameters, events and __context. 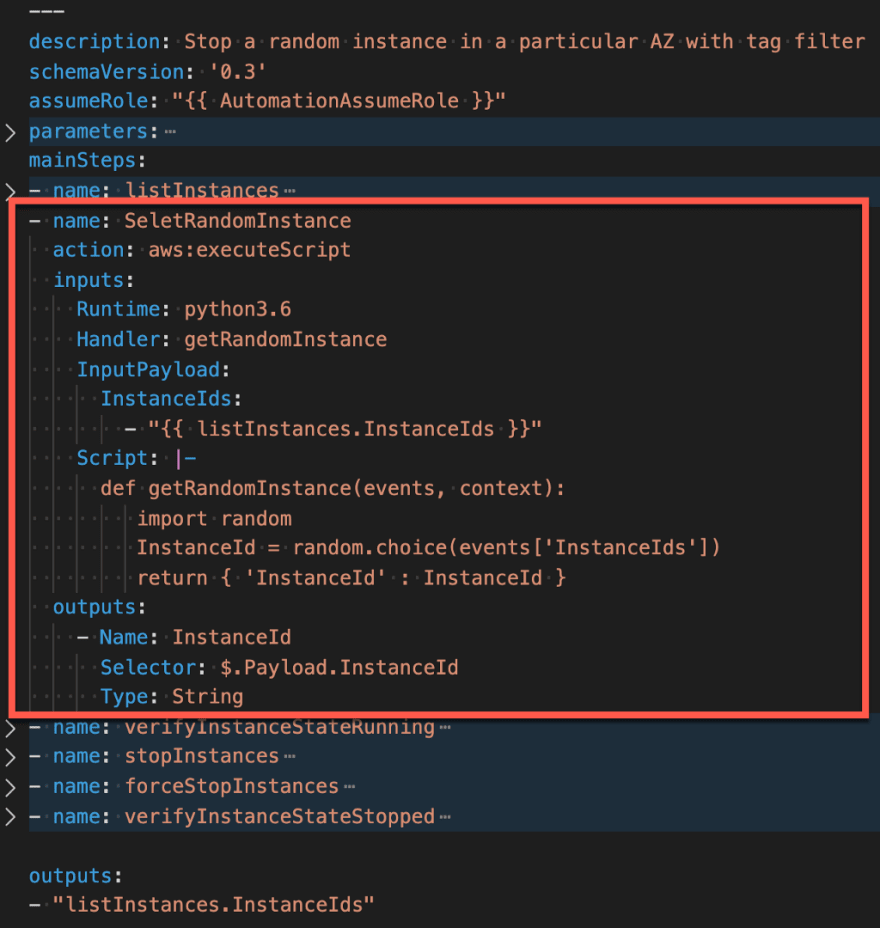 The output of script execution is a Payload object on which you can execute the JSONPath selector. In this example, $.Payload.InstanceId.

The third step of the document uses another type of action, aws:waitForAwsResourceProperty, that asserts the state of the random InstanceId returned from step two. 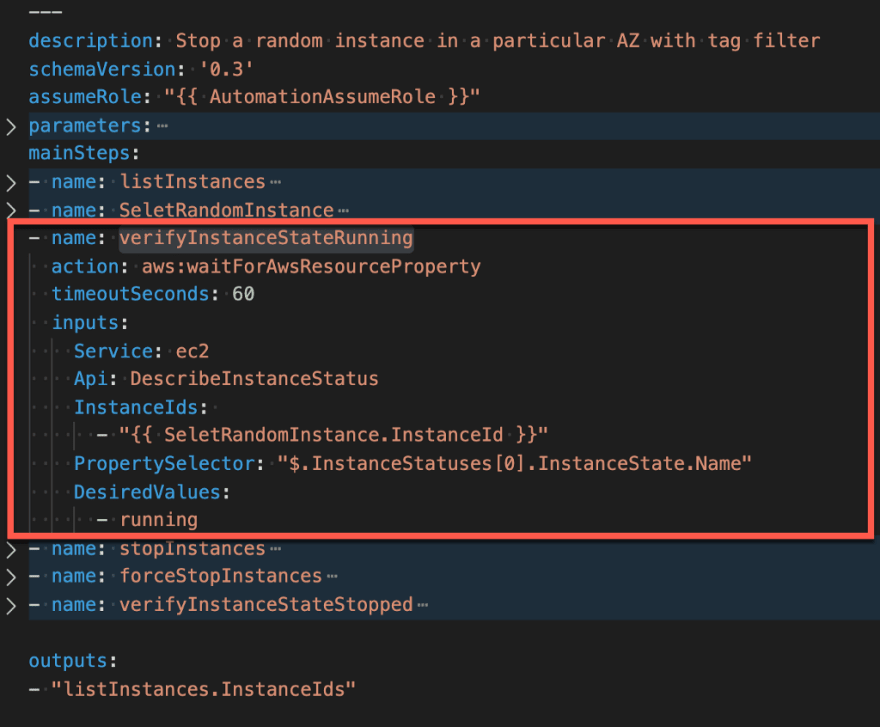 Note: As you may have noticed, the input is a StringList, but with a single item, InstanceId. That allows us to easily modify the random function from the previous step to return several items instead, without having to change anything else in the document.

The fourth and fifth steps of the document use the action type aws:changeInstanceState. As you have probably guessed, these steps change the state of EC2 instances — in that example, to stopped. The input is again the InstanceId from step two. 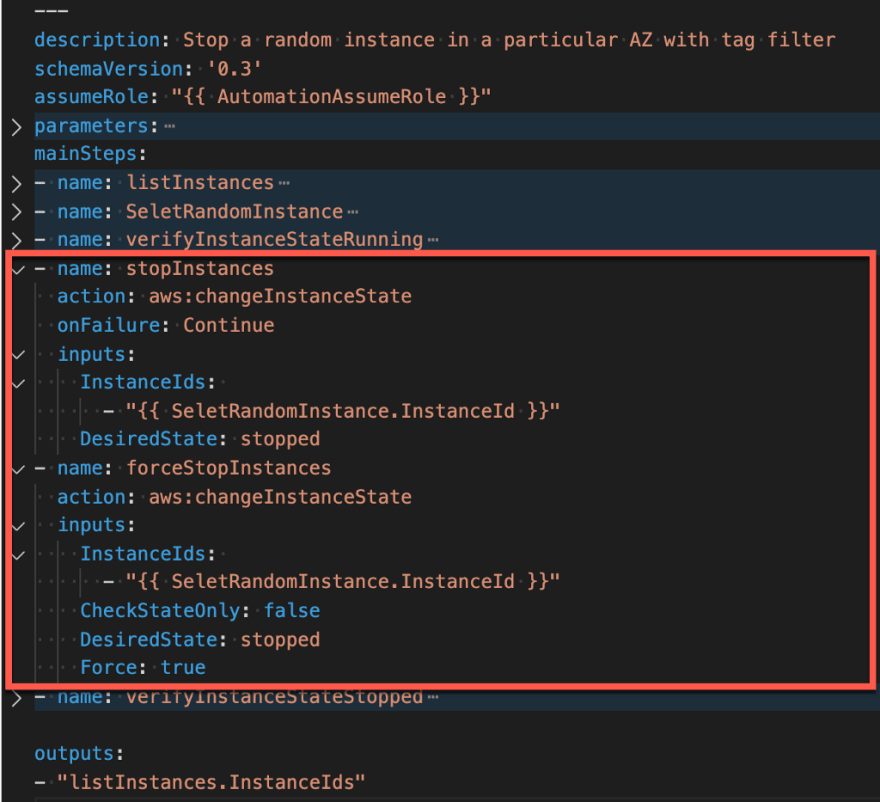 In the stopInstances step, the EC2 control plane attempts to gracefully shutdown the selected EC2 instance, allowing it to flush its file system caches or file system metadata. However, sometimes, there may be an issue with the underlying host computer, and the instance might get stuck in the stopping state. That is why the forceStopInstances step set Force to true, which forces the instances to stop.

Note 2 : The default timeout value for the aws:changeInstanceState action is 3600 seconds (one hour). You can limit or extend the timeout by specifying the timeoutSeconds parameter.

Finally, the last step of this document is to verify the state of the instances to be stopped or terminated. This step is arguably redundant since aws:changeInstanceState also asserts on the desired value. However, for the sake of this example, I preferred to make that step explicit. 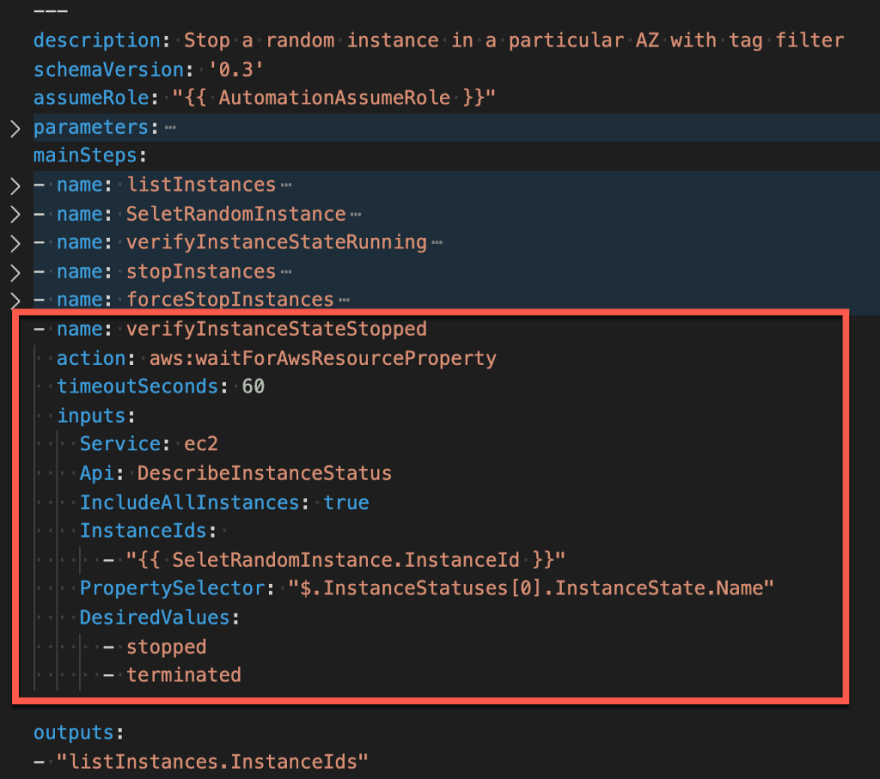 For this example, I will assume that you already have some EC2 instances launched in your AWS account with appropriate tags (I use SSMTag:chaos-ready for the demo).

By default, SSM doesn’t have permission to perform actions on your AWS resources. Start by creating a role — e.g., SSMAutomationChaosRole with the following policy.

It should give you enough to get started with actions calling EC2, SSM Run Command, and AWS Lambda. You should, of course, extend or restrict this policy to your own needs.

To get you started, I created a few ready-to-use SSM Automation documents.

Currently, the following chaos experiments are available — feel free to ask or contribute for more!

To use any of them, you need to create a SSM Automation document using the AWS CLI as follows:

After uploading the document, you should see it under the Owned by me tab in AWS System Manager Documents filtered by Document type: Automation .

Go to the Automation dashboard in the AWS System Manager and click Execute automation.

Filter the documents by Owner: Owned by me, and you should see your newly uploaded document(s). 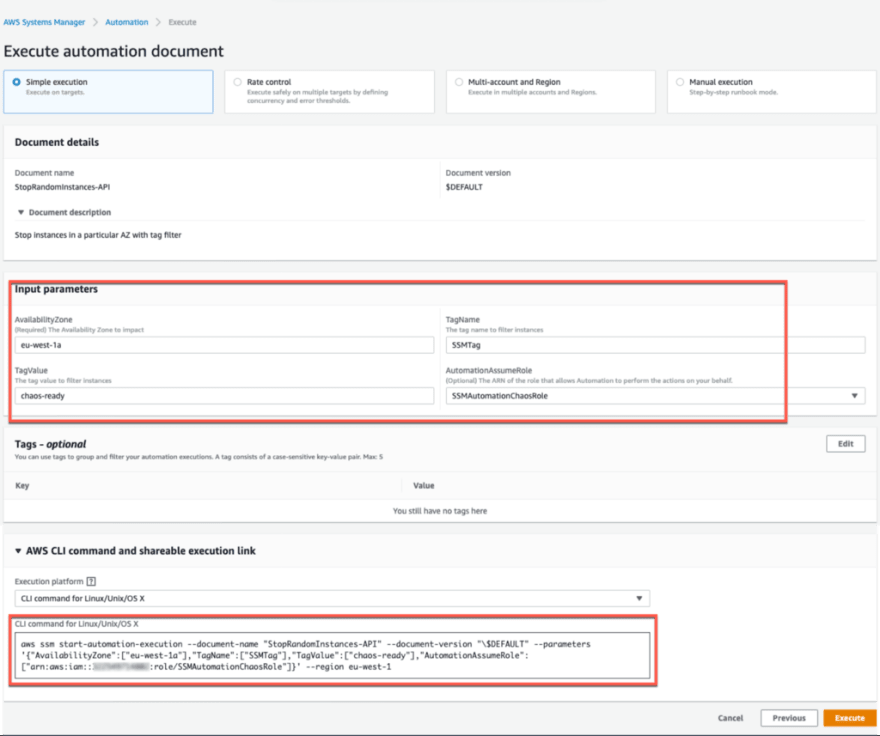 Note: If you prefer using the AWS CLI, notice that the console outputs the AWS CLI command execution equivalent.

You enter the input parameters defined in the automation document here, namely AvailabilityZone, TagName, and TagValue (I use SSMTag:chaos-ready). Remember to select the correct role created earlier, in this demo SSMAutomationChaosRole, to allow the execution of the experiment.

Before running the experiment, let’s take a look at my instances currently running in eu-west-1.

As you can see, I have four instances in eu-west-1a but only three with the correct tag SSMTag:chaos-ready. I will use that information to verify that my filters are working correctly.

You can follow the execution of each step from the AWS Console. Each step gets a Step ID that you can monitor independently. Following is a zoom on Step 1: listInstances. 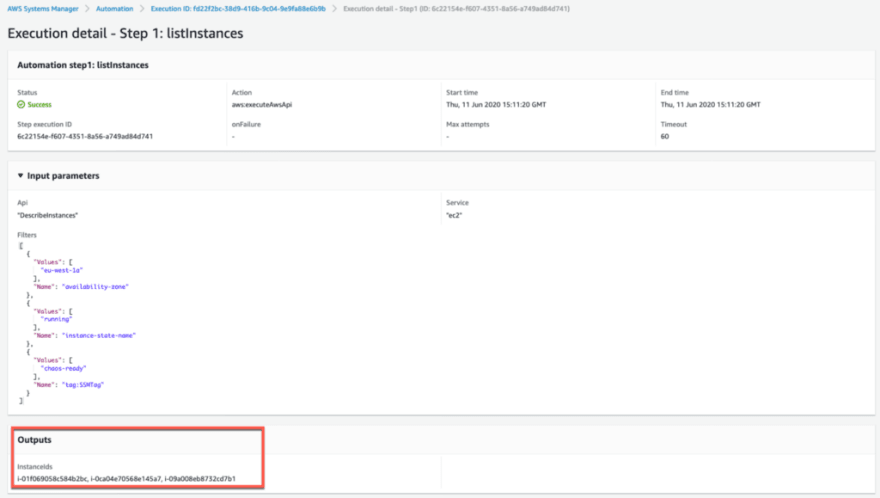 We can now check and verify that our filters work. And indeed, we have three instances with the correct set of tags in eu-west-1a.

Once all the steps completed successfully, we can verify that the correct instance stopped — i-01f069058c584b2bc

As you can see, our EC2 fault injection worked.

You might have noticed the Cancel execution in the execution status page.

CAUTION: You can only attempt to cancel an execution since SSM cannot guarantee that actions can be stopped or reverted. For example, you can’t undo an activity that is already happening, e.g., stopping and terminating an instance.

As always, with chaos engineering, be extra careful with your experiments — plan carefully!

What made Chaos Monkey so unique was that is was continuously running in Netflix’s environment, regularly shutting down EC2 instances, at a regular interval — it wasn’t just a one-off.

Now that you have successfully executed your EC2 failure injection with SSM Automation, you might want to turn that into a continuous chaos test, or continuous verification.

Luckily, it is straightforward to do!

You can execute the above SSM Automation by specifying our SSM document as the target of an Amazon CloudWatch event.

You can verify, change, or disable the rule from the CloudWatch console afterward.

After a while, you should start seeing executions of the SSM Automation document every 5 min.

As you can see, the last four executions differ and hold the IAM role assumed by the CloudWatch event calling SSM Automation execution.

That’s it — We have successfully built our custom Chaos Monkey using SSM Automation! Hopefully, this blog post will inspire you to start your journey with chaos engineering. Feel free to comment, share your ideas, or submit pull-requests if you want to add new functionalities to this collection of SSM documents.

Note for serverless fans: If you are interested in doing the same experiment but with actions using AWS Lambda, use this document with this lambda function.

My experience starting out with Deepracer (Q4/22)

Once unpublished, this post will become invisible to the public and only accessible to Adrian Hornsby.