* This is a pretty drastic oversimplification, see this Khan Academy course if you're interested in learning more. 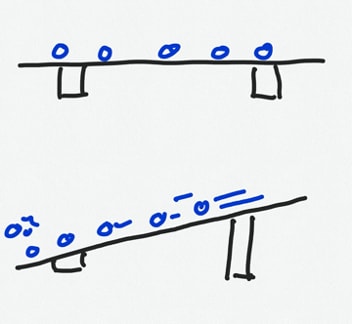 If we replace the table's surface with a rougher material (maybe a lego-top table), the marbles will roll more slowly, bouncing off the rough parts of the table and making noise. 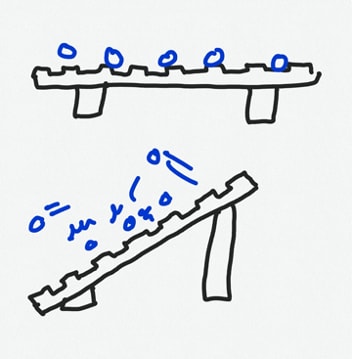 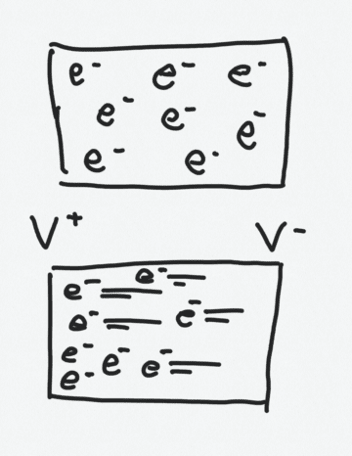 There is also something to be learned about electrons flowing through metal from our rough, lego-top table covered in marbles. When our marbles encountered more resistance in trying to move from one end of the table to the other, it took longer for them to reach the other end. They spent more of their energy bouncing around and creating noise, rather than increasing their speed across the table. Electrons flowing through metal encounter a similar resistance -- they "collide" with the ions in the material (the atoms and their clouds of electrons). The energy that they're no longer spending moving forward is instead turned into heat and light. This is why electronics get hot and lightbulb filaments glow.

Resistance is affected by a lot of things. For wires in particular, longer wires have a higher resistance, because there's more material that an electron must travel through. Thinner wires have higher resistance, as well, because there are simply fewer electrons to carry the energy introduced by the voltage difference across the metal. Every material also has an inherent resistivity, which describes how much it resists the flow of electrons. Rubber and glass have very high resistivities -- they don't make good conductors. On the other end of the spectrum, metals like silver, copper, and aluminum have very low resistivities.

The temperature of a material also affects its resistivity. Why this is the case is difficult to explain without invoking quantum mechanics, but the result of this is a dangerous feedback loop which can lead to overheating. Metals offer some resistance to the movement of electrons, they heat up because of that resistance, which increases their resistivity, which causes them to heat up more, and so on. This is why modern electronics have fail-safe temperature triggers -- if your device gets too hot, it will refuse to work...

...it's also why we cool our devices with fans and heatsinks, and, in extreme conditions, with liquid coolants.