Any non-trivial Rails app these days needs Background Jobs and a popular framework for this is Sidekiq. Sidekiq uses Redis as a data store. This means we need to deploy 4 services to Render to run our app:

Render supports "infrastructure as code" so we're going to define these services in a YAML file so it's tracked in git along with our application code. Ruby environments are supported natively and they also have a managed PostgreSQL database offering. For anything else we need to use a Docker image, so using Redis is a tiny bit trickier.

At the time of writing, Render is working on a managed Redis offering. When that's live, it should be easier to deploy and manage a Redis service.

We'll deploy the Rails web app as a web service, the Sidekiq worker as a background worker and Redis as a private service using a Render maintained Dockerfile.

Firstly, we need to update our database and Puma configurations for production. Follow this section from Render's Rails deployment guide and then return to this post.

Then, we need to add a build script that will be run when the app is deployed. Create a file called render-build.sh in your bin directory and add the following contents:

This script is also from Render's Rails deployment guide.

Ensure the script is executable by running the following command:

Lastly, we create our infrastructure specification. In your project root, create a file called render.yaml and paste in the following:

Most of the above file should be self explanatory. I recommend changing the service names to something specific to your app. The only tricky bit is providing the REDIS_URL environment variable to our Rails and Sidekiq services. Unlike PostgreSQL which is a managed service, Redis is a generic private service; so the only the host name and port is given to us in environment variables by the Render platform. This means we need to add the redis:// protocol directive to the URL on our own.

I found that the easiest way to do this was interpolate the REDIS_HOST environment variable that Render gives us to create a REDIS_URL variable in the startCommand for our services. You can how this is done in the Rails and Sidekiq services above.

If you run the Rails console in the Render dashboard, you'll need to invoke it using REDIS_URL="redis://${REDIS_HOST}" bundle exec rails console otherwise the console process won't be able to find the Redis service.

And finally, all we need to do is connect this YAML file to Render. Go to the Render dashboard, click New in the top right corner and select Blueprint. 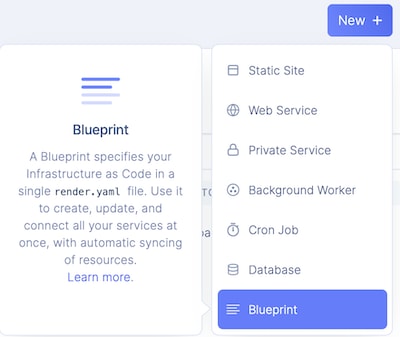 Follow the on screen instructions to connect your repository and you should be good to go!

I'm using the above approach in my app: Scattergun. So far I'm really happy with it. I'm excited to see what the Render team has in store for the future and personally I plan to use them for all my projects in the foreseeable future.

Scattergun is the easiest way to collect email addresses on your landing page and send emails to your mailing list. Get started for free!

Once suspended, ayushn21 will not be able to comment or publish posts until their suspension is removed.

Once unsuspended, ayushn21 will be able to comment and publish posts again.

Once unpublished, all posts by ayushn21 will become hidden and only accessible to themselves.

If ayushn21 is not suspended, they can still re-publish their posts from their dashboard.

Once unpublished, this post will become invisible to the public and only accessible to Ayush Newatia.

Thanks for keeping DEV Community 👩‍💻👨‍💻 safe. Here is what you can do to flag ayushn21:

Unflagging ayushn21 will restore default visibility to their posts.